Skip to content
Other Related Web Links:  Swan Information and Photos … Listing of Swan Species … Photos of the Various Swan Species for Identification 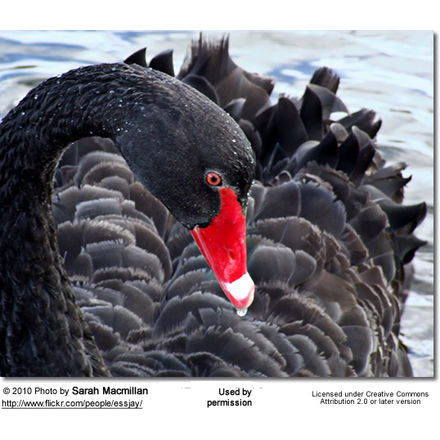 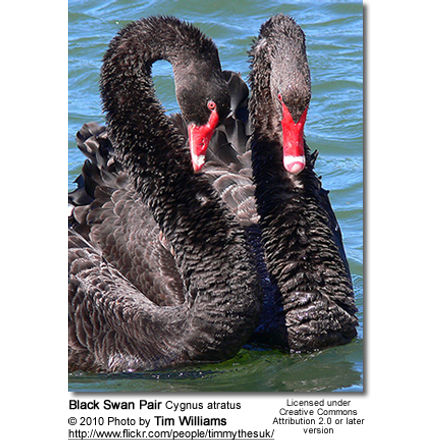 The Black Swan (Cygnus atratus) is a large Australian swan.

It has been noted that the Australian black swan only swims with one leg, tucking the other leg above its tail. The reason for this may be that the swan can more easily change direction when swimming on the surface of the water, if needed to escape an oncoming predator or to more quickly get to food.

While swimming, they hold their necks either arched or erect, and their feathers are often raised in an aggressive display. 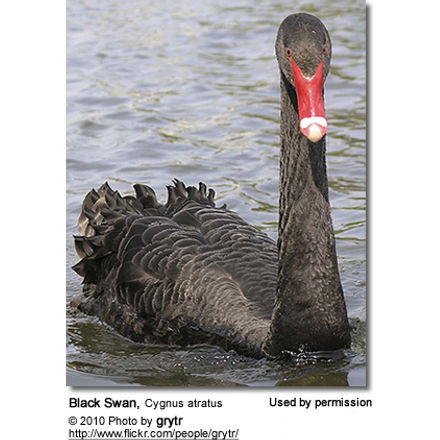 This waterbird breeds mainly in the southeast and southwest regions of Australia, southeast Tasmania, and New Zealand.

Black swans are common in the coastal and wetland areas of southern Australia, where they nest in swamps and river estuaries. They are rare to uncommon in the dry central and tropical northern areas of Australia, and are absent from Cape York Peninsula (the most northern tip of Australia).

The Black Swan is also relatively common in New Zealand. But contrary to Australia, where it is given legal protection as a native species, the Black Swan can be legally hunted in New Zealand (at certain times of the year), as authorities consider them an introduced / invasive species.

However, scientists argue that Black Swans have also naturally flown to New Zealand and, therefore, they should be considered natives rather than introduced species, and should be given equal protection under the law. Please refe to below article …

Black swans are vagrant to New Guinea and have been introduced to North America and Europe, where feral populations have established themselves. In fact, a colony of Black Swans has made Dawlish, Devon, UK its home for decades, and this swan has been the town’s emblem for forty years.

They are able to fly all over Australia with only a few stops by the water resources. In flight, a wedge of black swans will line up in a V formation. Black Swans fly strongly with outstretched necks, making whistling sounds with their wings and baying, bugling or trumpeting vocalizations. Sometimes they travel in enormous flocks and move from one feeding ground to another.

Black Swans can be found singly, or in loose companies numbering into the hundreds or even thousands.

An Australian Black Swan (escapee) was photographed in Cheryl Kelly at the Tennessee River in Camden, Tennessee (11/29/2011) 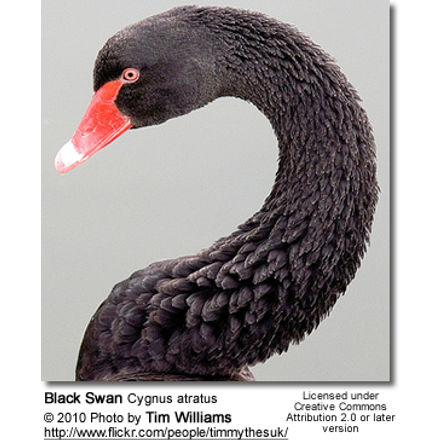 Adult Black Swans have a mostly black plumage, with the exception of the broad white wing tips that are visible in flight. The bill is a deep orange-red, with a distinct narrow white band towards the tip of the bill. The legs and feet are greyish-black.

It has the longest neck amongst the swans, and the neck is curved in an “S”.

Yearly Molt: After breeding, Black Swans lose all their flight feathers, rendering them unable to fly for about a month. During this time, they will usually remain on large, open waters for safety.

Gender ID: Males are slightly larger than females, and have a longer and straighter bill. Females have a slightly lighter plumage.

Juveniles: Immature birds have greyish-brown plumage which turns black at the age of one year. Unlike the adults, young birds have black wing tips.

Similar Species: The Black Swan could at a distance and in flight be confused with a Magpie Goose. The Black Swan can still be distinguished by its much longer neck and slower wing beat.

Their life expectancy is recorded to be about 10 years. 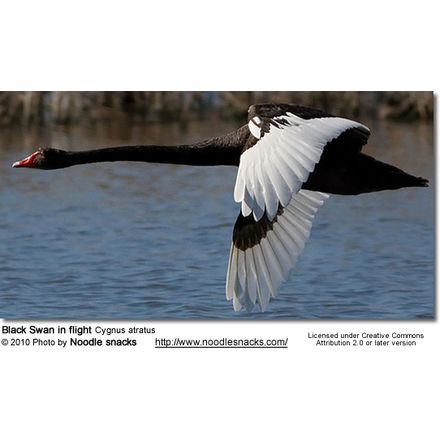 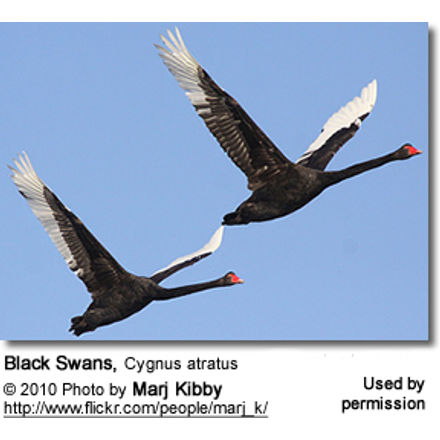 In Australia, Black Swans breed from February to September – sometimes in large colonies.

Most Swans find their mates before the age of 2 years – usually during the winter season. Even though some may nest for the first time when they are 18 months old, most won’t start until they are 3 to 4 years old.

Swan pairs typically bond for life and pairs stay together throughout the year, including moving together in migratory populations. However, it has been observed that some of them switch mates over their lifetimes, particularly after nesting failures, and some that lost their mate did not mate again. The “divorce rate” is estimated to be about 6%. Additionally, studies found that around a third of all broods exhibit extra-pair paternity. Same-sex pairings have also been observed.

Captive black swans are known to hybridize with several other related swan species as well as several species of Answer geese.

They will nest in areas with ample food supply, shallow and uncontaminated water, and few disturbances. . These nesting territories range from 6 to 150 acres in size and are often located near where the female was hatched. The female chooses the nesting area, while the male defends it. Swan pairs are most likely to return to the same nesting site if they were able to raise young successfully there in the past. 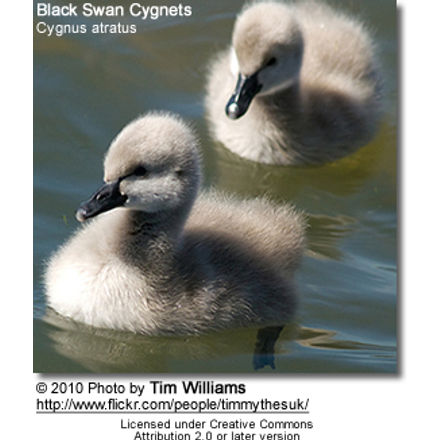 Swans typically place the nest on slightly elevated sites surrounded by water, such as on top of old beaver houses, dams or muskrat mounds; on emergent vegetation that is either floating or anchored to the bottom of the water; or on small islands. Pairs will either repair and use an old nest, or construct a new nest.

Nest-building begins in mid-April and may take up to two weeks. The male uproots aquatic vegetation, grasses and sedges, and transfers it to the female, who will first pile it up high and then uses her body to form a depression to place her eggs in. It’s basically shaped like a large open bowl. The interior is lined with down and feathers. Once completed, the nests is between 1 and 1.5 meters (3-4½ feet) in diameter and up to 1 meter high.

The nest is often surrounded by a 20 to 30 foot (6 to 9  meter) ditch – usually filled with water to make it more difficult for mammalian predators to access the nest. 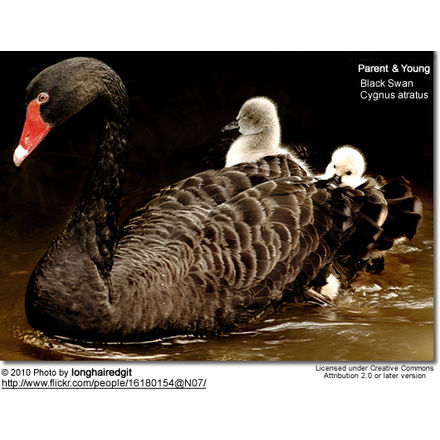 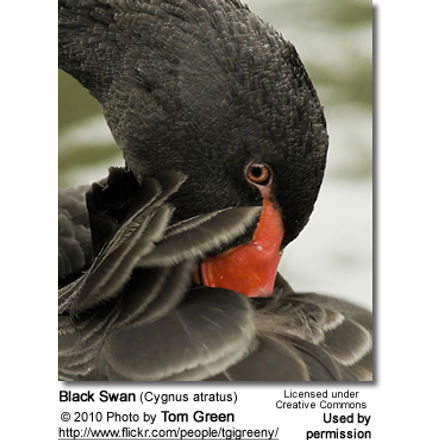 Usually in the Australian autumn (March – April) or in winter, the female lays eggs – sometimes before the nest is even completed. In the north-eastern part of Australia, it is usually February, and in the western parts it often is in August. Eggs are laid every other day until the clutch is complete.

If it is the female’s first clutch, she is likely to lay fewer eggs and these eggs are more likely to be infertile.

Once a clutch is complete, the female incubates the eggs for about 35 to 50 days, while the male remains nearby to defend the nest against intruders and predators. Very rarely, the male may help brooding the eggs. During the incubation period, the female leaves the nest only for short periods to feed on nearby vegetation, bathe and preen her feathers – however, before doing so, she usually covers the eggs with nesting material to conceal them. The male will also remain nearby to deter predators.

The parents usually perform a “victory display” after intruders are deterred – which is similar to their courtship display and consists of facing each another while quivering their wings and trumpeting loudly. They may lay a second clutch if the first eggs or cygnets are lost. 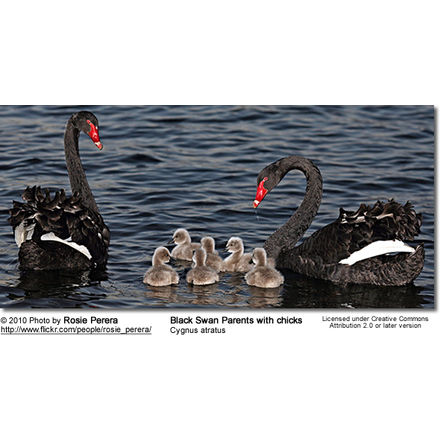 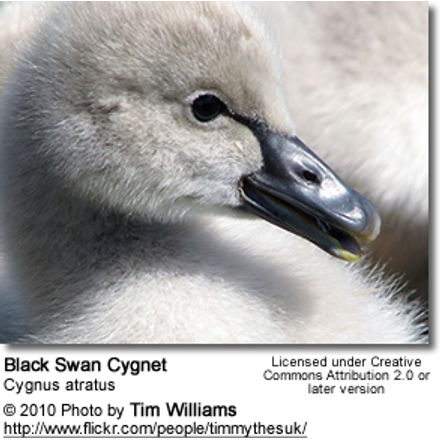 Swan chicks are commonly referred to as cygnets. The hatchlings are covered with down and their eyes are open. Within 24 hours of hatching, the cygnets are able to leave the nest and another day later, they are able swim and dive under water to escape danger. In deeper water and on longer trips, they ride on their parent’s back.

Both parents feed and protect the young. For the first weeks after hatching, the parents will intermittently brood the cygnets during poor weather and cold spells.

When they are about 2 weeks old, the cygnets are able to feed themselves. A large part of their diet consist of aquatic insects and crustaceans. Even though the adult swans only eat plant matter, cygnets initially need protein-rich insects to support their rapid growth. When they are about e 4 to 6 weeks old, the young start changing over to a plant-based diet. Once they are 2 to 3 months, their diet is similar to the adults’ — mostly consisting of leaves,  stems, tubers and the roots of aquatic plants.

When they are 8 to 10 weeks old, they have reached half their adult size and have the juvenile plumage that they retain until their second winter.

After three months, the young are able to fly. Fledglings usually remain close to their parents for continued protection and brooding until the next spring. Cygnets are tended by the parents for about 6 months. 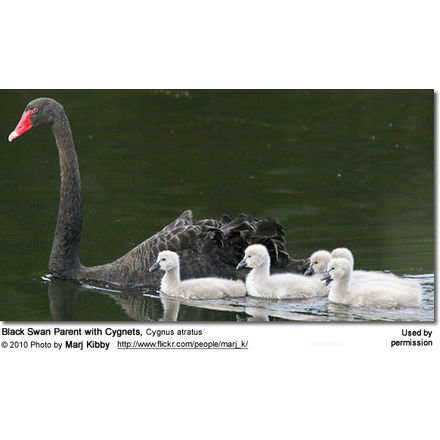 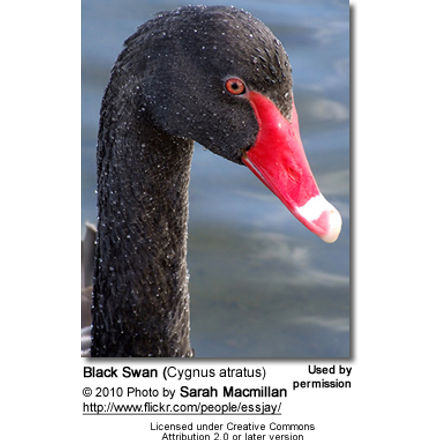 Swans feed primarily on algae and aquatic plants; but they also eat grain, grasses and crop foods, such as wheat, potatoes and carrots – especially in the winter when other food sources aren’t readily available.

The Black Swan is a vegetarian. Food consists of algae and weeds, which the bird obtains by plunging its long neck into water up to 1 m deep.

Swans also forage by swimming picking up plant material from the water’s surface or water’s edge. Occasionally they will graze on land, but they are clumsy walkers. 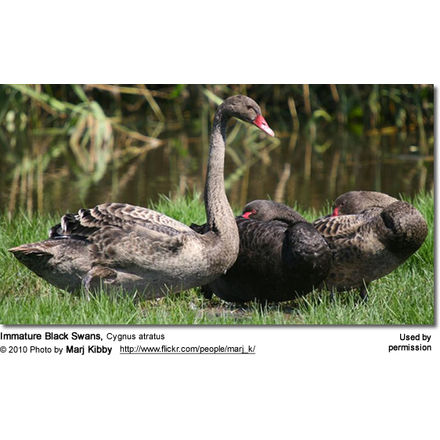 At this point in time, no threat of extinction or significant population declines has been noted.

The Black Swan is protected under the Australian National Parks and Wildlife Act, 1974. It is evaluated as Least Concern on the IUCN Red List of Threatened Species.

On the water or in flight, the Black Swan makes musical and loud bugle-like calls, as well as a range of softer crooning notes.

It also whistles, especially when disturbed while nesting.