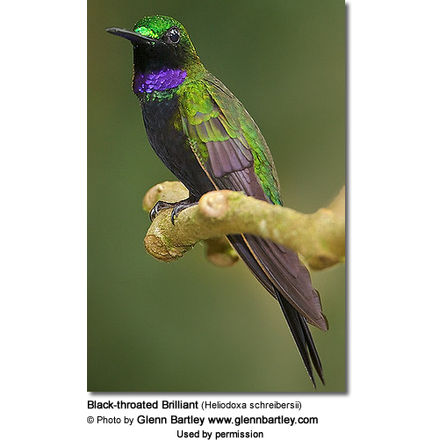 The Black-throated Brilliant (Heliodoxa schreibersii) is a large South American hummingbird that is uncommon within its range, which includes the countries of Brazil, Colombia, Ecuador and Peru.

They are mostly found in humid montane forests, from 600 – 1250 m, on the east slope of the Andes and on outlying ridges; or the humid forest interior of northern Amazonia.

The male’s plumage is a mix of dark green and black. He has a mostly black throat with a glittering purple gorget (patch) on his lower throat. This patch is smaller on the female. The female also tends to have a shorter tail than the male.

The Black-throated Brilliants primarily feed on nectar taken from a variety of brightly colored, scented small flowers of trees, herbs, shrubs and epiphytes. They favor flowers with the highest sugar content (often red-colored and tubular-shaped) and seek out, and aggressively protect, those areas containing flowers with high energy nectar.They use their long, extendible, straw-like tongues to retrieve the nectar while hovering with their tails cocked upward as they are licking at the nectar up to 13 times per second. Sometimes they may be seen hanging on the flower while feeding.

Its song is a long, rapidly descending trill “we’e’e’e’e’e’e’e’u’u'”. Their calls are described as a strong “tchup” with a rising series of ringing notes “tsu tse tsi tsee.”