The Blue-footed Booby (Sula nebouxii) is a bird in the Sulidae family which comprises ten species of long-winged seabirds.

The name “booby” comes from the Spanish term bobo, which means “Stupid”. This is because the Blue-footed Booby is clumsy on the land. Like other seabirds, they can be very tame.

The natural breeding habitat of the Blue-footed Booby is tropical and subtropical islands off the Pacific Ocean, most famously, the Galápagos Islands, Ecuador.

Blue-footed Boobies are distributed among the continental coasts of the eastern Pacific Ocean to the Galapagos Islands and parts of California.

The Blue-footed Booby is strictly a marine bird. Their only need for land is to breed which they do along rocky coasts.

It has long pointed wings and a wedge shaped tail. They have strong thick necks. The booby’s eyes are placed on either side of their bill and oriented towards the front.

They have excellent binocular vision. The Blue-footed Booby’s eyes are yellow. The male has more yellow on its iris than does the female. The Blue-footed Booby has permanently closed nostrils specialized for diving. They breathe through the corners of their mouths. Their feet range from a pale turquoise to a deep aquamarine.

Males and younger birds have lighter feet than females do.

The courtship of the Blue-footed Booby consists of the male flaunting his blue feet and dancing to impress the female. During the dance, the male will spread his wings and stamp his feet on the ground. 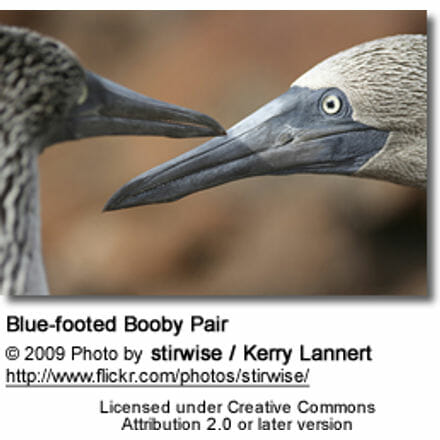 The Blue-footed Booby is a monogamous animal although they do have the potential to be bigamous. They reunite at their breeding grounds. The breeding cycle of the booby is every 8 to 9 months. When mating, the female parades and the male points his head and tail high to the sky and his wings are back to show off to the female. The male blue-footed booby also makes a high-piping whistle noise. Males do a dance to attract the females. The dance includes the males lifting their blue feet high and throwing their heads up. The blue-footed booby is not a seasonally reproducing species. They are opportunistic in their breeding.

The female Blue-footed Booby lays two or three eggs. Both male and female take turns incubating the eggs, while the non-sitting bird keeps a watch. Since the Blue-footed Booby does not have a brooding patch (a patch of bare skin on the underbelly) it uses its feet to keep the eggs warm. The chicks cannot control their body temperature up until about one month old. Eggs are laid about 5 days apart. 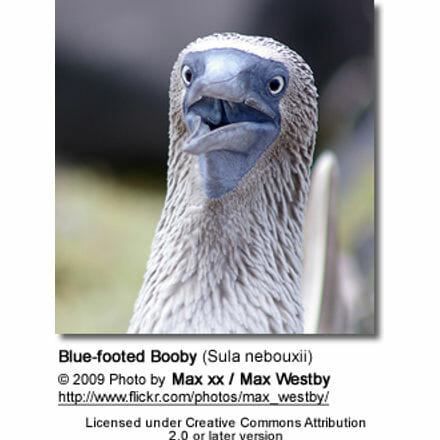 Blue-foots are one of only two species of booby that raise more than one chick. This may be because of the males specialized diving in shallow waters. They must be fed frequently, so the adults constantly hunt for fish. The chicks feed off the regurgitated fish in the adult’s mouth. If the parent Blue-footed Booby does not have enough food for all of the chicks, it will only feed the biggest chick, ensuring that at least one will survive. Boobies may use and defend two or three nesting sites until they develop a preference a few weeks before the eggs are laid. Usually 2 to 3 eggs are laid and 1 to 2 chicks are hatched. The incubation period is 41-45 days. They nest on bare black lava in a small dip in the ground. The female will turn to face the sun throughout the day so the nest is surrounded by excretion. These nests are done in large colonies. The male and female share quite a bit of their responsibilities. The male will provide food for the young in the first part of their life because of his specialized diving and the female will take over when the demand is higher.

It dives into the ocean, sometimes from a great height, and swims underwater in pursuit of its prey. It hunts singly, in pairs or in larger flocks. 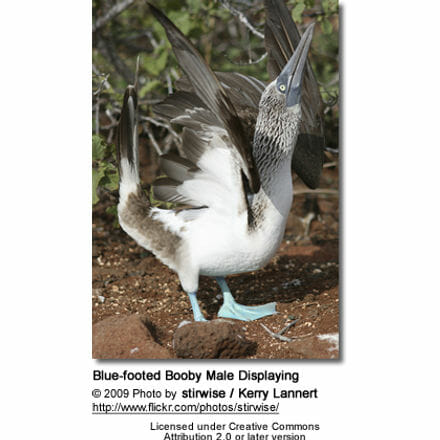 They travel in parties of 12 or so to areas of water with large schools of small fish. When the lead bird sees a fish shoal in the water, it will signal the rest of the group and they will all dive together to catch the fish. Surprisingly, individuals do not eat with the hunting group, preferring to eat on their own, usually in the early morning or late afternoon. When they spot a school they will all dive in unison. They will point their bodies down like a torpedo and dive into the water. Plunge diving can be done from heights of 33-100ft and even up to 330 ft (100 m). These birds hit the water around 60 mph (97 km/h) and can go to depths of 82 ft (25 m) below the water surface. The prey is usually eaten while the bird is still under water. Males and females fish differently which could contribute to the reasons that blue foots, unlike other boobies raise more than one young.

The male is smaller and the tail is larger for its body which enables the male to fish in shallow areas instead of just deep waters. The tail can flatten out easier enabling him to change direction in the shallow water. The female is larger and can carry more food. The food is then regurgitated to the young. The males feed the young for the first part of the incubation period. This is done because the males can bring back food quicker than the female. When the demand for more food takes over the female provides the food to the young.

Blue-foots will make raucous or polysyllabic grunts or shouts and thin whistle noise. The males of the species have been known to throw up their head and whistle at a female flying by. Their ritual displays are also a form of communication.