The Blue-fronted Amazon is one of the most common companion parrots, and a favorite pet bird in the United States.

However, it is endangered in its natural habitat in North-eastern Bolivia, South-Western Mato Grosso, Brazil, Paraguay, Northern Argentina and Northernmost Buenos Aires.

A small feral breeding population has also established itself in Stuttgart, South-western Germany.

Even though the subspecies xanthopteryx has been treated as a separate species, they interbreed freely with the nominate species where they come into contact.

A wide range of color combinations have been produced. Some birds have no blue head feathers whatsoever; others have turquoise blue on their forehead or even the whole front of the bird (face, neck and chest) is blue.

Most have yellow somewhere on their head or face; some have blue, a little white and then yellow as head markings.

There are significant individual variations in both facial pattern and amount of yellow/red to the “shoulder”. In one extreme, individuals with essentially no yellow to the head and entirely green “shoulder” are known from north-western Argentina.

The beak is dark grey and their feet are grey.

Striking mutations have occurred in aviaries, including the cinnamon featured below: 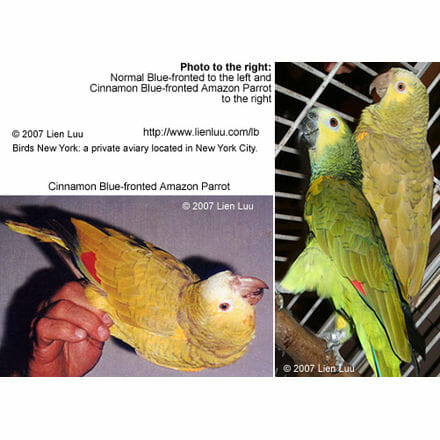 In their natural habitat, Blue-fronted Amazons nest in tree cavities.

They generally produce a clutch of 3 to 5 oval, white eggs, which measure around 38 x 30 mm.

The eggs are incubated by the female for 26 to 28 days and the chicks leave the nest about 60 days after hatching.