The Blue Grosbeaks (Passerina caerulea) are medium-sized, colorful songbirds with an extremely large range across much of North and Central America.

They were named for the blue plumage of the male, and their large beaks (derived from the French word “gros-bec,” translated “big beak”).

These seed-eating birds are in the same bird family as the Northern Cardinal; and genetic evidence suggests that the Lazuli Buntings are their closest relatives.

The Blue Grosbeaks breed across most of the United States – with populations occurring in central California, east through Nevada, Colorado, the Dakotas, Kansas, Missouri, Illinois and New Jersey south to central Florida and the Gulf of Mexico coast, through Mexico and Central America as far south as Panama.

They migrate south to winter in Mexico, Central America (south to Costa Rica), and the Caribbean. Occasionally, they winter in southern USA.

They are usually found along forest edges, in open areas with scattered trees, overgrown fields, brushy pastures and in riparian areas, along farm hedgerows and ditches, and other areas with medium-sized trees and low shrub density 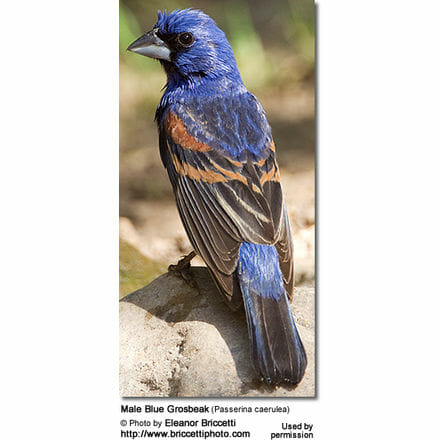 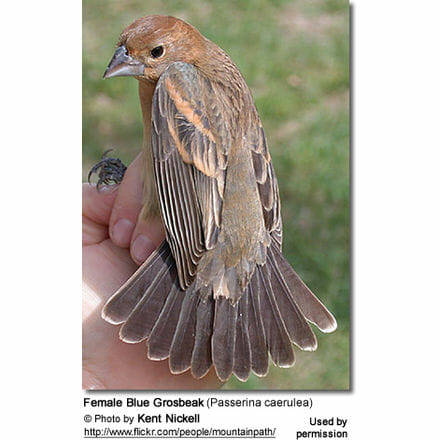 Males and females can easily be identified by the different color of their plumages.

The breeding male Blue Grosbeak is has a nearly entirely deep blue plumage with a blackish face. Outside the breeding season, the blue feathers have brownish edges.

They are often observed flicking and spreading their tails. 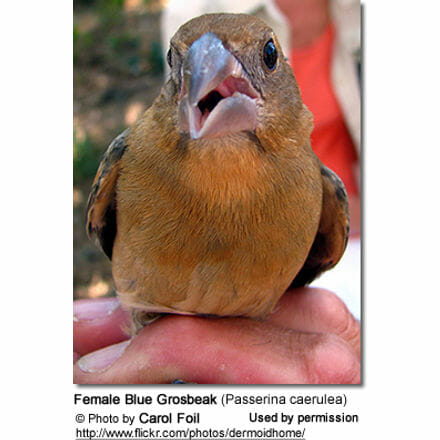 Juvenile females resembles adult females except they have less extensive blue markings on the rump.

Juvenile males look like an intermediate between adult females and adult males, with variable amounts of blue mixed with brown. 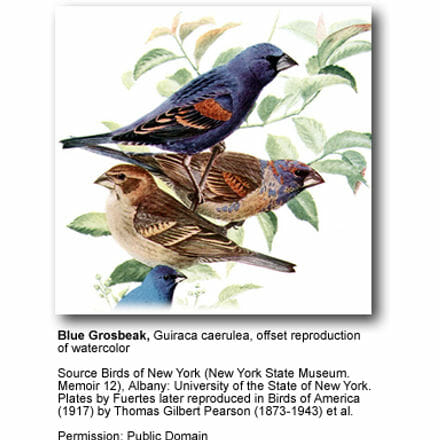 Blue Grosbeaks feed on insects – such as grasshoppers, cicadas and mantis; other invertebrates, such as snails; seeds of wild and cultivated grasses; grains; and wild fruits. They forage on the ground, or in shrubs and trees. During the migration, small flocks of them will often feed in rice, corn, and other grain fields.

Breeding usually occurs from March to July. The males usually reach the breeding territory first and sing to attract potential mates. In the northern parts of the range, they usually only raise one brood a year, and further south two (usually with the same mate).

It is believed that the female alone constructs the compact cup nest out of twigs, bark, rootlets, and other fibers and strips of material found in her environment, including snake skin, rags, string, cellophane, or strips of newspaper. The nest is usually situated low in small trees, bushes, shrubs or tangles of vines, briers and other vegetation about 3.3 – 9.8 feet (1 – 3 meters) above the ground.

The average clutch consists of 3 – 5 pale blue, unmarked eggs that are incubated by the female alone for 11 – 12 days. The hatchlings are helpless and are mostly cared for by the female, including being fed by her. However, once they fledge, the male will also feed them, while the female may get started on a second nest.

The young leave the nest when they are about 9 – 12 days old.

Blue Grosbeaks are heavily parasitized by the Brown-headedCowbird and the Bronzed Cowbirds, who will lay their eggs into the grosbeaks’ nest for them to incubate and raise as their own. Blue grosbeaks have also been reported to build their nest on top of a parasitized nest and have successfully raised both cowbird chicks and their own young.