This family was named for their soft fluffy, mousy grey-brown plumage and long, thin tails, and their mouse-like habit of scurrying around in brush as they search for food. These highly social birds are often seen in noisy flocks foraging or dust bathing together or engaging in mutual preening.

Mousebirds are not commonly kept as pets, but they do have a loyal following, who describe them as being friendly with the entire family.

They have a relatively short lifespan of about ten years.

The range of the Blue-naped Mousebirds stretches from the western coast of Sudan, Ethiopia and Somalia in the East, south through East Africa to the eastern borders of the Democratic Republic of the Congo. They are also popular in the pet cage trade. 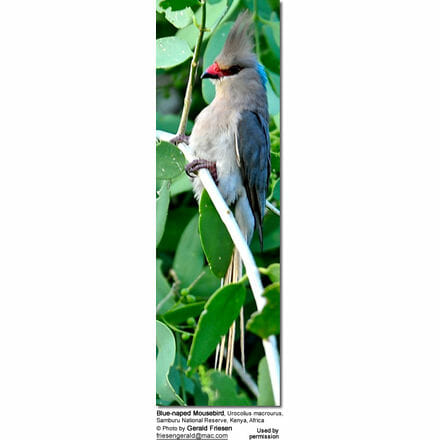 Blue-naped Mousebirds are small to medium-sized birds that measure about 13 – 14 inches (33 – 35 cm) in length of which half of the length is comprised by the tail.

Characteristic for the adult Blue-naped Mousebird is the blue / turquoise patch on the nape (back of the neck). This patch is lacking in juvenile birds.

Adults have a mostly ash-brown, greyish plumage and a prominent head crest.

The bill is strongly down-curved. Adults have a black-and-red bill and immature birds have greenish bills and pink facial skin.

All members of the mousebird family have strong feet that are relatively large for their body size and are widely spaced. Unlike other birds, they are able to rotate all four toes to face forward allowing them to feed upside down, hold food with their feet, and perch with their legs positioned at strange angles.

Shares part of its range with the White-headed Mousebird. The blue nape of the Blue-naped Mousebird and the white head of its counterpart makes identification easy.

Like all members of the mousebird family, Blue-naped Mousebirds mostly feed on fruits, berries, leaves, buds, flowers, nectar and seeds. They may also eat soil and swallow pebbles to assist in grinding up vegetation to facilitate digestion.

Their strong reversible outer toes enable them to feed upside down and perch with their legs positioned at strange angles.

Most birds are monogamous (one mate), others are polygynous (several mates). However, with these birds both monogamous and polygynous pairings have been observed. Several females may lay their eggs into the same nest and share incubation and chick-rearing duties. Males also help with incubating the eggs and raising the chicks.

Blue-naped Mousebirds may breed throughout the year. Their nests are relatively large for birds of their size. Both the male and the female construct the nest out of pits of vegetation and animal material, as well as items found in their environment (such as cloth and paper).

Females can lay up to 7 eggs in a nest, but the average clutch consists of 3 – 4. The eggs are incubated for about 14 days.

Parents, as well as helpers (often the young from previous seasons) assist in raising the chicks, which usually leave the nest when they are 17 – 18 days old. They are generally independent when they are about one month old.