It is estimated that only about 50 – 249 of these magnificent parrots remain in the wild. The main causes of their diminishing numbers are:

These birds are now listed as Critically Endangered by the International Union for Conservation of Nature (IUCN).

Several conservation schemes are being implemented. Fortunately, this species is relatively easy to breed in captivity.

However, they are still rare and expensive to acquire. In the United States, they is a great demand for these parrots and they can cost over 2,000 dollars.

Captive birds are appreciated for their intelligence, playfulness and inquisitive nature; and their ability to mimic human vocalizations. They may live 80 years or longer. 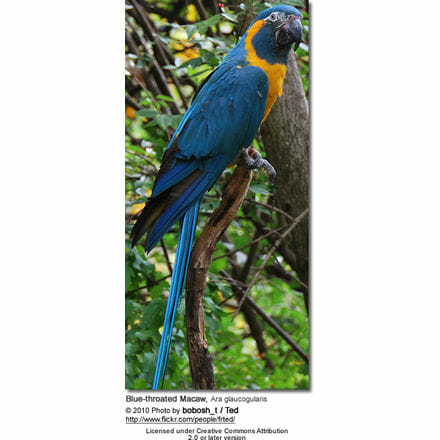 This race was long disputed mostly because it was only discovered in recent history. Previously, it was considered an aberrant form of the Blue and Gold Macaw.

However, even though the ranges of these two species overlap, there have been no records of them interbreeding, pointing to the fact that these are two different races.

To this day, these birds are still sometimes also referred to as the “Bolivian Blue and Gold Macaws” – a name also used to describe a disputed subspecies of the Blue and Gold Macaw (Ara ararauna [?bolivia?]). These two similar species are often found alongside.

They occur naturally in north central Bolivia, specifically at a cluster of sites in the department of El Beni and possibly the northern parts of the adjacent Santa Cruz. Formerly, it is believed that they were also found in the countries of Paraguay and northern parts of Argentina.

Their habitat is a mixture of palm groves, savannah grasslands, swampy lowlands and occasionally gallery forest. They are associated with the palm Attalea phalerata – a resource for both nesting and feeding.

They are generally seen in pairs, but will also join small flocks of 7 – 9 individuals. One large roosting group of about 70 birds has been reported, and it thought to be a congregation of non-breeding adults and immature birds. 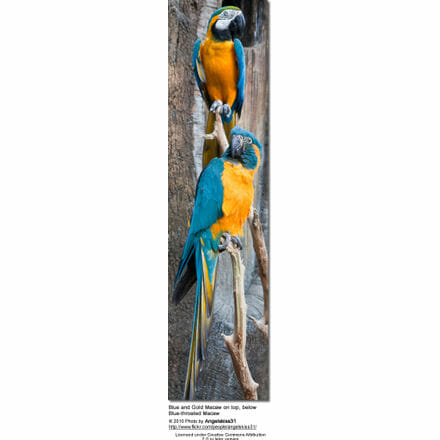 The forehead, crown, neck, wings and tail are light greenish-blue. The naked face is striped with dark greenish-blue feather lines.

This parrot has a striking plumage that is turquoise blue on the head and back, and the chest, abdomen, thighs and the underparts of the wings are bright yellow. They have long tails that are orange below and blue on top.

This species has distinctive blue cheeks and throat patches. Males may possibly have a darker patch of blue on the throat.

The large bill is dark grey-black, hooked and strong enough to crush even larger nuts. The beak also comes in handy when climbing around the trees. The dark grey feet are zygodactylous (with 2 toes pointing forward and 2 toes pointing backward) – an adaptation that helps them grasp securely the branches as they perch or move around in trees.

The eyes are pale yellow with an indistinct greyer ring near the pupil.

The dark grey feet are zygodactylous (with 2 toes pointing forward and 2 toes pointing backward) – an adaptation that helps them grasp securely the branches as they perch or move around in trees.

Immature birds look similar to the adults but have a darker throat band, shorter tail and dark brown or grey irises.

They feed on various nuts, seeds, fruits and berries, favoring above all the fruit of the Motacú palm (Attalea phalerata) for which they are important natural dispersal agents as they carry the seeds of these trees away from the mother plants, dropping them on the forest floor in other areas resulting in new growth.

Some of the seeds they eat are actually toxic – especially in the dry season. These smart birds have found a natural way of detoxifying themselves: ingesting mineral-rich clay found at so-called “clay licks” or “macaw licks.” The clay binds to the toxic compounds and coats the inside of the digestive system protecting it from any toxic plant chemicals. 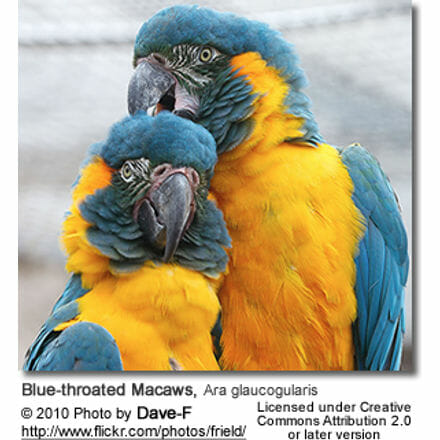 They are monogamous forming pair bonds that last a lifetime. Even though pairs will often join flocks, they usually remain close together. In flight, their wings are nearly touching. They spend hours each day preening and feeding each other.

Most breeding occurs between November and March. They build their nests within the cavities of large trees, mostly palm trees. The average clutch usually consists of 2 – 3 eggs (although sometimes only one is laid).

The eggs are incubated for about 29 days. Both parents protect and feed the nestlings, which fledge when they are about 4 months old. However, they remain with their parents for up to one year and reach reproductive maturity when they are about 2 – 4 years old. 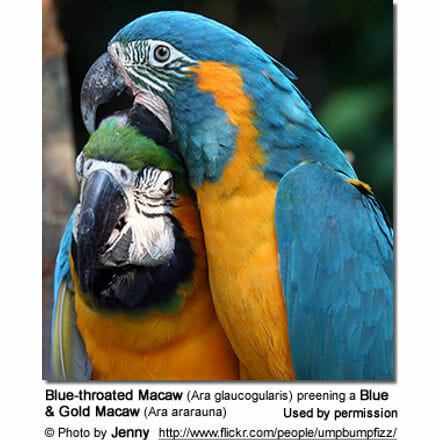 Their sentinel or alarm calls are described as loud and raucous – somewhat higher pitched than those of the related Blue-and-gold Macaw. When disturbed, flocks of them lift off into the air screeching loudly and circling overhead until they feel the danger has passed.