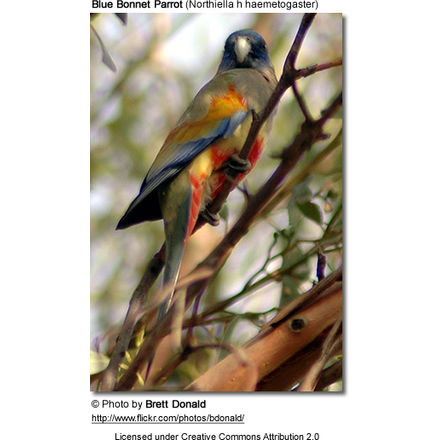 Blue Bonnet parrots are sporadically dispersed, socially gathering in groups of up to 30 birds.

They permanently mate. Their courtship ritual is quite entertaining and entails fanning and shaking of their tail feathers, raising their crown feathers and a lot of head bobbing.

They nest in low-lying tree openings lined with wood substances. The average nest consists of 4 to 7 eggs, which are incubated by the female for about 22 days.

The male assists in rearing the young and feeds the female on the nest.

The main diet consists of native grasses and herbaceous plants, as well as flower and fruit nectar. 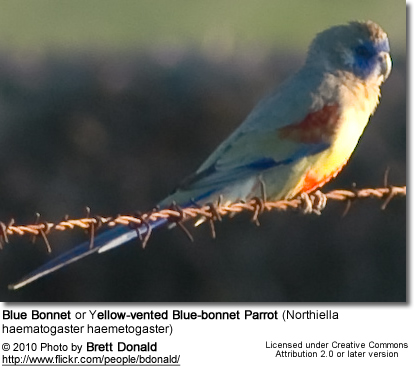 The general plumage is olive-brown. The forehead, lores (the regions between the eyes and bill on the side of a bird’s head), front of crown, ear-coverts and forward cheek area are mauve-blue. The ear-coverts have a dull yellowish streaking and the remainder of the head, back and lower back is olive-grey. The throat and upper breast are dull olive-brown, each feather washed pale brown. The lower breast, sides of abdomen and under tail-coverts are yellow. There is a deep red patch on the abdomen and parts of the thigh. The bend of the wing, primary wing feathers, outer webs of primaries (longest wing feathers) and under wing-coverts are violet-blue. The shoulder feathers and outer lesser wing-coverts are blue. The median, inner lesser wing-coverts and inner secondary-coverts are olive. The outer secondary-coverts are olive with broad blue markings. The rump and upper tail-coverts are olive. The upperside of the middle tail-feathers are bronze-green with dark blue tips. The outer tail-feathers are dark-blue with whitish-blue tips. The underside of the tail is white-bluish. The bill grey-horn. There is a narrow grey periophthalmic ring. The irides (= plural of iris) are grey-brown and the feet grey-brown.

Females look like males, but have a duller blue facial area. The red to abdomen and thighs is much less extensive. The white under-wing stripe; head and bill are on average smaller.

Immatures as adults, but with much duller plumage; much less red to abdomen and thighs; under-wing stripe present; adult plumage attained by 12 months. 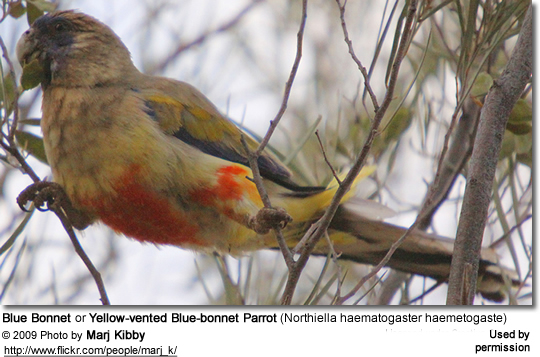 This endangered species (CITES II) is endemic to South Australia

They look like the nominate species featured above, but their plumage is generally much paler.

The female looks like the male; however, the head and the bill are, on average, smaller. This species is about 30 cm / 12 inches long, from beak to tip of tail.

The Red-vented Blue-bonnet is endangered in its natural range (CITES II), which includes Southern Queensland and northern New South Wales in Australia

As Blue-bonnet Parrots (haematogaster) – above – but the red to abdomen extends to under tail-coverts. The shoulder feathers and outer lesser wing-coverts are pale green. The inner lesser and median wing-coverts are brownish-red. They also tend to be slightly larger, averaging 31 cm / 12.25 inches in length.

Females look like males, but have a generally duller plumage. The facial area is duller blue. The red to abdomen, under tail-coverts and thighs are less extensive; and the head and bill is on average smaller.

Young birds look like adults, but with a slightly duller plumage. There is less red to the abdomen, under tail-coverts and thighs. They attain the adult plumage when they are about one year old. 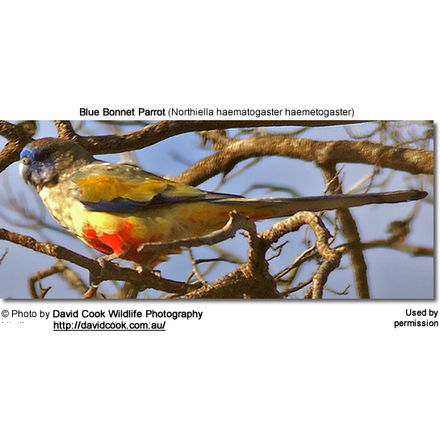