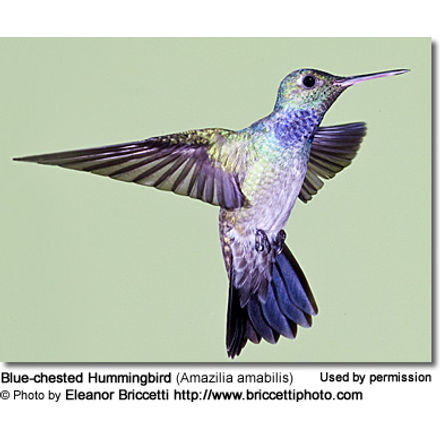 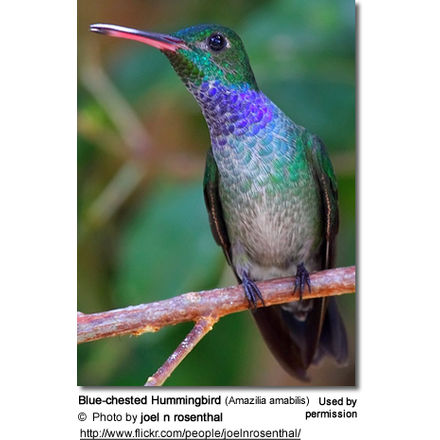 The Blue-chested Hummingbirds (Polyerata amabilis / Amazilia amabilis) – also known as are Blue-breasted or Beryl-crowned or Lovely Hummingbirds – are Central and South American hummingbirds that occur naturally in Honduras, Nicaragua, Costa Rica, Panama, Colombia and Ecuador; where they occur in subtropical or tropical moist lowland forests and heavily degraded forest.

Some authorities consider the Blue-chested Hummingbird conspecific (one species) with the Charming Hummingbird or Beryl-crowned Hummingbird (Amazilia decora) – as they look very much alike. 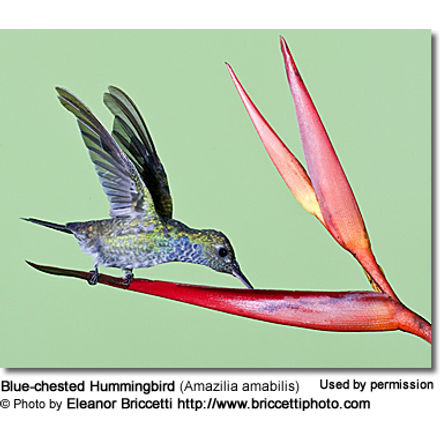 The Blue-chested Hummingbirds primarily feed on nectar taken from a variety of brightly colored, scented small flowers of trees, herbs, shrubs and epiphytes. They favor flowers with the highest sugar content (often red-colored and tubular-shaped) and seek out, and aggressively protect, those areas containing flowers with high energy nectar.They use their long, extendible, straw-like tongues to retrieve the nectar while hovering with their tails cocked upward as they are licking at the nectar up to 13 times per second. Sometimes they may be seen hanging on the flower while feeding.