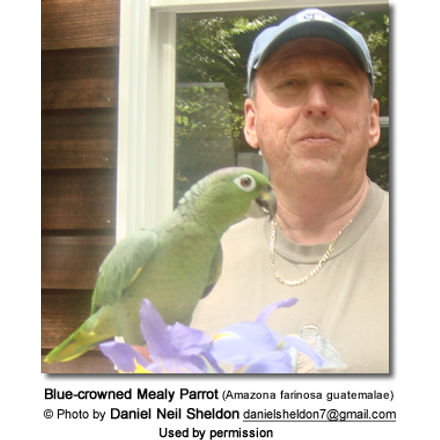 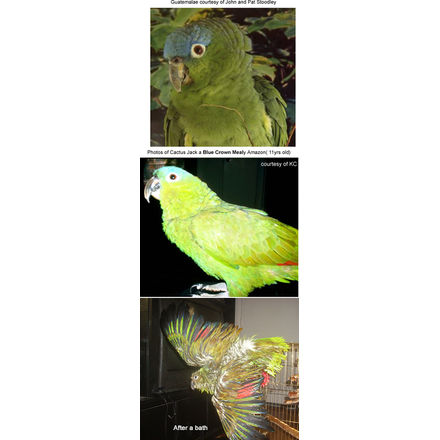 The Blue-crowned Mealy Parrot (Amazona farinosa guatemalae) is endemic to Mexico, from southern Veracruz and Oaxaca along Caribbean slopes south to Honduras.

Its habit consists of rain forest, montane forest to 1,500 m (5,000 ft); partially cleared areas with scattered trees and mangroves; prefering forest edges. The Mealy Parrot is social and can be found in pairs or in large flocks. They are even known to interact with other parrots, such as macaws.

They are usually quiet but can be loud at dusk and dawn.

They are generally common, although not as numerous as other Amazon species.

The general plumage green, but the sides of head and crown are blue. As with other members of Genus Amazona, individuals within a species can vary greatly.

David Woodbury, from the UK (1999), described the Blue-crowned Amazon as follows: “[W]e have had three superb male guatemalae, all of which had brilliant blue crowns (a colour similar to that in aestiva); one had a black upper beak and ivory-colored lower beak, the other two have black beaks. One had virtually no nape (back of the neck) patch and none of the typical “mealy” effect on the back, yet another looked like he had been sprinkled with flour. We have found that the body color of guatemalae tends to be a more vivid green than virenticeps, which can be a yellow-green.

Vocally both guatemalae and virenticeps are distinct from other Mealys although any Amazon in a mixed collection may mimic other sounds. “ 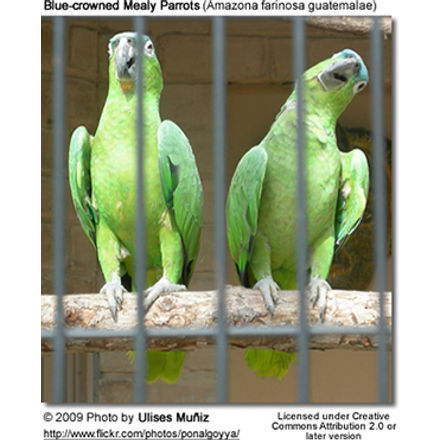 The Mealy Amazon as Pets or in Aviculture:

Mealy Amazons have a very docile temperament and usually get along well with other birds. They are considered the gentle giants of the Amazon parrots. The noise level and talking abilities vary greatly amongst this species. There are some quiet birds amongst them — but others can get REALLY noisy; indeed, their voices can carry over a mile. Mealies enjoy repeating a phrase over and over and each time using a different inflection.

Their diet should consist of a quality seed mix of safflower, wheat, oats, hemp seeds*, dried rowan-berries, buckwheat and mungo beans; sprouted sunflower seed; some pinenuts; various fruit and vegetables (particularly half-ripened maize); rose-hips; greenfood; regular mineral supplements. (*Hemp Seeds are often referred to as “super-seeds” as they offer a complete amino acid profile, have an ideal balance of omega 3 and 6 fatty acids, and provide an impressive amount of trace minerals – they also have the highest concentration of protein in the plant kingdom.)

They require roomy cages, as they are very active, and they should be provided plenty of out-of-cage time in addition to mental stimulation. The Foraging page will be helpful in providing an adequate set up for your amazon. Daniel Neil Sheldon describes his experience with his Blue-crowend Mealy as follows:

I have extremely rare Blue-Crowned Mealy named Malenghky, which is Russian for small simply because he is so big! I have an A’Frame Home on ten (10) acres of land. So I have lots of twigs/branches for parrots to chew on!

I give (him) lots of attention and have (a) large cage with toys for him. I’ve owned lots of parrots, but the Blue-Crowned Mealy is the best! They are the “Gentle Giant of The Amazon!” Thanks for listening or reading, Dan Sheldon

When Mealy Parrots reach sexual maturity they usually form monogamous relationships with a single partner. Courtship usually begins in early spring, starting in December through June in Australia and commencing in April in the United States. These parrots are known to be aggressive and noisy during breeding. During this period some males may be surprisingly nervous of their caretaker . The young fledge when they are about 60 to 65 days old It is recommended to NOT separate the young from the adults before they are 20 weeks.

At three-day intervals, the hen will usually lay 2 to 3 eggs, occasionally 4. She incubates them for 24 to 25 days, occasionally up to 28 days. The male will regurgitate the food for the female to eat. The young usually leave the nest at around eight weeks of age.