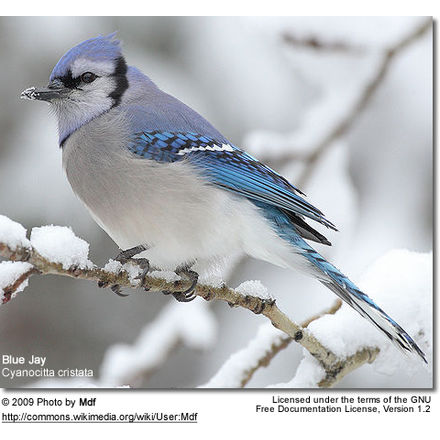 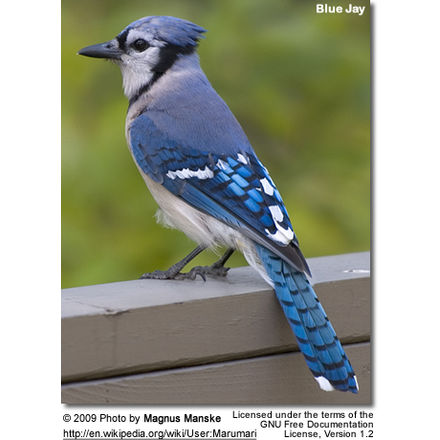 These jays are generally unafraid of humans, and the availability of garden feeders and their willingness to exploit resources offered by humans have enabled these birds to expand their territories in the west.

Even though these birds are well appreciated for their colorful plumage details and confiding dispositions, they are amongst the noisiest of all birds, and are known for their aggressiveness towards smaller birds visiting bird feeders.

Blue Jays occur naturally in southern Canada (Newfoundland) and in the United States east of the Rocky Mountains. West of the Rockies, they are replaced by the closely related, darker-plumaged Steller’s Jays.

Northern populations may migrate south for the winter. Those found further south tend to be sedentary (non-migratory). The proportion of migratory Blue Jays is believed to be less than 20 percent.

Those birds that do migrate tend to do so in large flocks that often include thousands of them. Their migratory paths extend along the Great Lakes and the East Coast of North America. Migration takes place during the daytime.

They are quite common in mixed woodlands (especially those with oaks and beeches), and residential areas. Egg Incubation / Raising of the Young: Varying calls include the distinctive “jay- jay” (for which they were named), as well as rattling sounds, growls, whistles and chatters.

Noise Level: Typically vocal, except when close to nest site