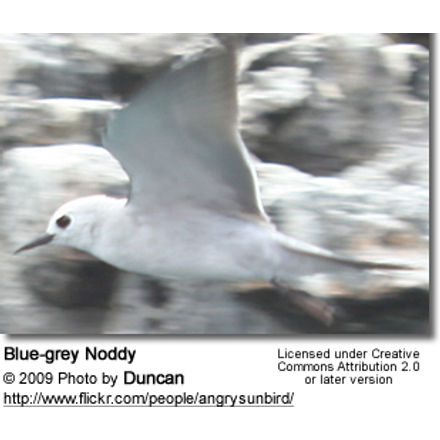 The Blue Noddy (Procelsterna cerulea) – also known as Blue-grey Noddy – is tern that is widely distributed in the Pacific Ocean.

It was formerly grouped with the Grey Noddy (Procelsterna albivitta) — however, most authorities now consider them separate species based on significant differences in size, coloration and geographical range. 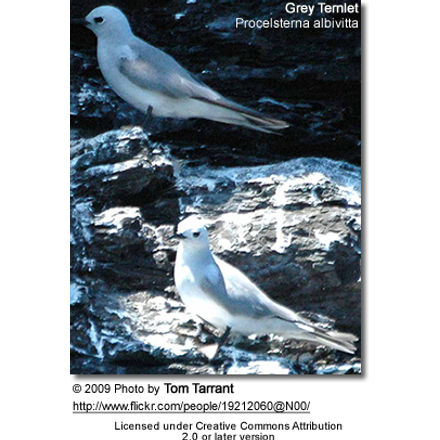 They inhabit open, shallow seas in tropical and subtropical regions; typically roosting and breeding on inaccessible cliffs; and, to a lesser extent, on sheltered rocky ground, beaches, or under bushy vegetation.

The eyes are black and appear large due to the black patches in front of them. They have white patches behind the eyes. There is a white patch behind the eye. The black bill is thin and pointed. The legs and feet are black except of the pale yellow webs.

The Blue Noddy is usually quiet. Its call is a soft, purring sound.

They generally forage in small groups close to the shore, over lagoons and inshore areas, often around upwelling currents. They feed by hovering above the surface of the water and diving to pick food from the surface.

The Blue Noddies’ breeding season varies by location. In Australia, breeding activities typically commence in September; in Kiritimati most breeding activities occur between August to November; in the Phoenix Islands between June and August; and in Hawaii, they breed year round, however, the egg-laying peak is from February to March.

They breed in colonies on rocky islands. The roughly constructed nest is made from grass and seaweed and typically placed on a sheltered rocky surface, in a crevice or hollow, or below a boulder or vegetation.

The female usually only lays one whitish egg with dark markings. The parents share the task of incubating the eggs for about 32 days, at which time the chick hatches. The nestling is brooded continuously by the adults for about 2 to 3 weeks. The parents feed the chick regurgitated food.

The chick fledges (takes its first flight) when it is 37 days old; but the parents will continue to feed it for some time after that.