Blyth’s Tragopan (Tragopan blythii) or the Grayed-bellied Tragopan is a pheasant that is a vulnerable species. The animal’s population is small and is believed to be decreasing at a rapid rate.

Blyth’s Tragopan is located in many different areas including Bhutan through north-east India and north Myanmar to south-east Tibet and also China. T

he total population is estimated to be about 2,500 to 9,999 birds (Bird life International 2008). This estimate is a very small number compared to some of its relative birds.

Tragopan blythii normally flock to wooded areas as it prefers the undergrowth of evergreen oak and rhododendron forests, and other dark quiet places. This bird has a higher elevation than most birds that normally ranges above 1,800 meters (Choudhury 2001).

Blyth’s Tragopan pheasant is the largest of all the tragopans.

Like most pheasants the male is brightly colored. It is recognized by its rusty red head, yellow facial skin, and that it is spotted with small white dots on its back called ocelli. A black band extends from the base of the bill to the crown couple with another black band extends behind the eyes.

Like the rest of the tragopans, males have two pale blue horns that become erect during matting (Niles 2007). Its lappet, a decorated flap, hangs from the throat and is brightly colored. This lappet can be expanded and exposed during mating season as well (Johnsongard 1986).

Females are not as brightly colored as the male tragopan, for they don’t need the extravagant appearance to attract a male counterpart. Overall they are dark brown with a mixture of black, buff and white mottling (Arkive 2003-2008). Their simple and dull look is a protection mechanism from other animals. It also allows the females to protect their young that are in the early stages of life. 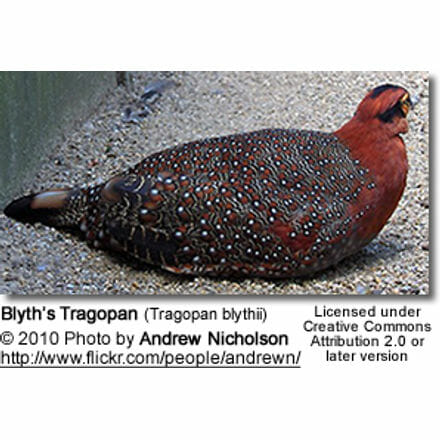 In the wild Blyth’s Tragopan have a very particular source of food. They normally feed on all different kinds of seeds, berries, fruits, and buds. Captive birds usually consume insects, worms, and even small fogs. Although, they are primarily vegetarians most birds have a large desire for barriers and fruit.

The birds primarily move up and down the slopes in search for food following paths that natives often set snares on (Johnsongard 1986). It is very uncommon for this species to travel far due to climate changes.

This is because their habitats normally have very mild winters, which are tolerable for longer periods of time.

For the majority of the Blyth’s Tragopan travel is only necessary in attempt to avoid the drying out of their vegetation. In this case they move down mountain sides for more comfortable food supply.

There is little information or support on how the Blyth’s Tragopan moves but it is suggested that they travel together in groups of four to five individuals, much like you would see in other species of tragopans (Johnsongard 1986). 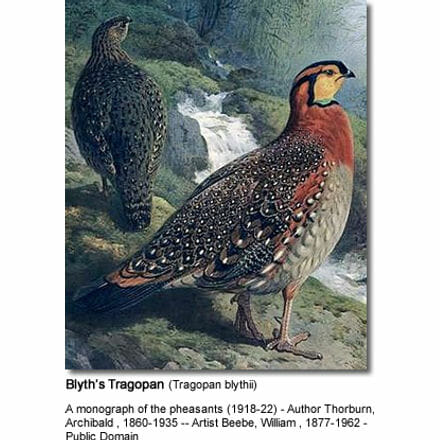 Blyth’s Tragopan starts mating in April and continues well into May. The Males advertise themselves with all sorts of antics and displays to try to attract a female counterpart. They try to attract females by bowing and scrapping the ground with their wings slightly raised and their flesh horns fully dilated while projected forward.

The more the male acts out and cause a scene the more likely they are to attract a female counterpart. When the female does not respond, the male intensifies this wild behavior to drawl more attention to him.

The male then proceeds to strut around the female, in an attempt to distract the female. He then continues the movements with his breast pushed forward and his wings extended into the air (Johnsongard 1986).

After a female becomes impregnated they can lay up to two to five eggs. The incubation period for eggs last for about twenty eight days. After hatching the offspring have a similar description to the female hen. The male tragopans acquire red on their neck during the first spring moult. During the second year of life full adult plumage is attained in the tragopan (Johnsongard 1986).

While no nests have been found in the wild, the Natives of Nagaland have stated that the nests are never on the ground, but are found in the trees, stumps, and small bushes. This record is consistent with the birds desire to stay at high altitudes.

The heights range from six to twenty feet above the ground. Nesting above the ground is advantageous because the seasonal rains are intensified to where flooding can sweep away all the vegetation that is found on the ground. The nests are made of sticks with a lining of smaller vegetation such as grass or weeds (Johnsongard 1986).

Without this habitat, the birds are left out in the open and are more likely to be attacked by other animals. Overexploitation is one of the biggest threats to all birds including Blyth’s Tragopan (Choudhury 2001). Twelve percent of bird species are threatened to extinction and overexploitation.

The Blyth’s Tragopan are considered to be the main threat to thirty seven percent of that number.

Over exploitation reduces the population of species and causes the listing of eleven percent of the threatened birds on the IUCN Red List. The biggest concern is the eleven critically endangered species for which over exploitation is believed to be the factor that the population numbers are declining (Rosser 2002).

In Nagaland and Arunachal Pradesh the pheasant is being hunted for food with large scale snaring and are also regularly shot with guns and slingshots (McGowan 1995). In most cases hunting has not been a major factor on why species are put on the IUCN red list.

There are 290 species in the Galliformes order and twenty five percent of them are at risk which is twice as much as the whole bird species altogether. The level of exploitation of many species for food and income needs, by an expanding local human population, has a significant effect on the survival of many vulnerable or critical species of birds (Rosser 2002).

High levels of grazing and slash and burn agriculture in Bhutan are also significant threats. The effects of slash and burn techniques has a significant effect on the tragopans species because it takes away the entire habitat that the bird has. The population of the tragopan is believed to be declining because of these threats which are also dividing up the populations into smaller subpopulations due to fragmentation.

Fragmentation is an issue because it divides larger populations into smaller ones over a large area. The tragopans are not able to go from one area to the other because there are normally great distances between these populations. Fragmentation also does not let the pheasants get the genetic variation that they need. In order for them not to have problems with the hatchlings need to have a diversity of different species. 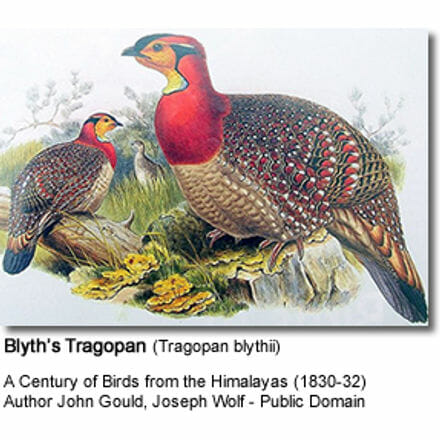 There is already some habitat set aside for the Tragopan blythii to survive. These areas include two wildlife sanctuaries and a small reserve in Nagaland, along with some other small areas for the bird to survive.

This species is already legally protected in all countries that it can be found in. Conservation awareness plans need to be implemented in all areas and more people to enforce the laws that are already set in place.

With these small sub communities, which are scattered over the habitat areas of the pheasant, it is becoming more and more difficult for the birds to reproduce with the genetic differences they need to survive (Arkive 2003-2008).

The country of India, Nagaland, and all of the reserves need to come together and set up an organization that could receive grants. With these grants the organization would be able to have more research done in the areas that the Tragopan lives.

They would also be able to help educate the people of Nagaland and Arunachal Pradesh. It is important for these natives to realize that they if they don’t stop hunting the Tragopan that they will become extinct.

To is also important to let the rest of the nation to understand the severity of the treatment of these birds.

Blyth’s tragopan should be protected in established wildlife sanctuaries to help them from the pressures of hunting and habitat loss.

Conservation measures in areas such as Mehao and Dibang Valley sanctuaries and all the reserves of Nagaland are needed to establish new sanctuaries where the species still thrive. Research surveys should be established so the distribution of the species can be found and documented.

The Blue Mountain National park in Mizoram, India is currently taking surveys of how many different Blyth’s Tragopan can be heard and seen in the area. The population was considered to be about 500 and 5000 (Ghose 2003).