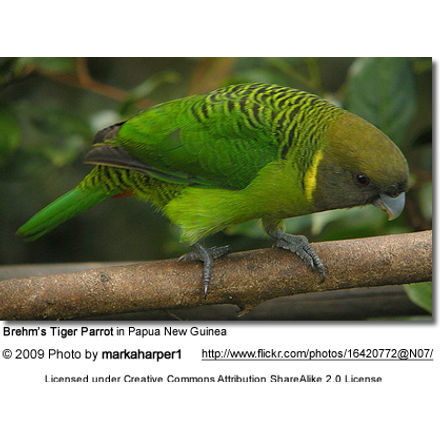 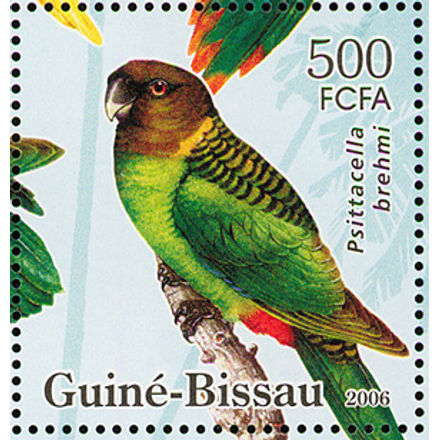 These parrots are usually found singly or in pairs. These generally shy birds are quite approachable when feeding, but are usually difficult to detect in trees and bushes as their green-brown plumage and slow movements present an effective camouflage in the foliage of the tries. They prefer lower branches.

They are generally quiet, only soft, plaintive peep sound are occasionally heard. Their flight is fairly slow.

Brehm’s Parrots are not common and are mostly found in unpopulated areas.

Males: The plumage is mainly green with a dull olive brown head, yellow and black bars on the mantle, back and rump, and red undertail coverts. The males have a distinctive yellow crescent on the side of the neck.

Females have a darker head, lack the yellow crescent (although some may have variable yellowing tinge to the nape. Hens also have a barred breast.

Young (immature) birds look like hens, but the green breast is narrowly edged with yellow.

Their flight is slow with rapid, noisy wing beats.

There are four subspecies (including nominate species) occurring in three distinct populations: 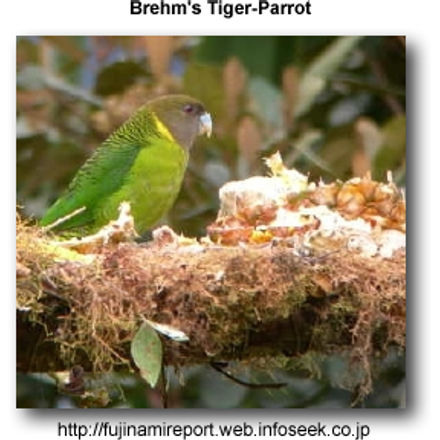 They feed on seeds (sprouted and unsprouted), fruits – including berries – in the sub-canopy or near ground level.

Little is known about their breeding habits. The breeding season probably commences in February until June. There is only one report of one nest being discovered in Wahgi Valley, Snow Mountains, which held two chicks. One was close to being completely feathered, while the younger one was still in down.

These quiet parrots are rarely found in aviculture and there have been no recorded breeding successes. They are extremely susceptible; rarely surviving more than 2 to 3 months in captivity. They usually die within hours of showing discernible symptoms. Possible causes are stress and incorrect diet. The inclusion of pine and grass seeds, as well as plenty of fruits and proper supplementation might increase successes.

Minimum aviary dimensions: 2.5 x 1 x 2 m (8 x 3 x 6 ft). Temperature should be regulated to be within the range found in their natural habitat (not too high, not too low).

They are endemic to Snow Mountains, Weyland Mountains and Mount Goliath, West Irian Jaya, in Indonesia.

Males look like the nominate species featured above, but the breast and abdomen are much more yellowish. The head is paler and the back, rump and upper tail-coverts are black, each feather with a broad yellowish-green edging. They are also larger than the nominate species.

Female look like the female of the nominate form, but the breast is black with a pale yellow edging to each feather. They lack the yellow band to the sides of neck. The abdomen is more yellowish than can be seen in the nominate form.

Males look like the nominate species featured above, but the plumage is generally much more yellowish, particularly on breast and abdomen – although this varies from bird to bird. Some males have a bluish tinge to the abdomen. The bill is narrower than that of the nominate form (brehmii).

Young (immature birds) look like females, but the edging to the breast and back is narrower and duller. The under tail-coverts are orange-red with yellowish-green tips. Their irides (= plural of iris) are yellowish-brown.