The Broad-tailed Hummingbird (Selasphorus platycercus) is a long-bodied, broad-tailed hummingbird that occurs mostly in the western United States and Mexico.

It has been named for the broad, rounded tail of both males and females.

The average lifespan of hummingbirds is 3 to 4 years.

The longest recorded life span for any hummingbird in North America is from a female Broad-tailed that was tagged then recaptured 12 years later, making her at least 12 years old. The Broad-tailed Hummingbird is mostly a migratory species with some resident populations in Mexico.

They summer throughout much of the inland West of the United States and Mexico; and the northern populations travel south to winter in Mexico.

They are also found Manitoba, Canada. 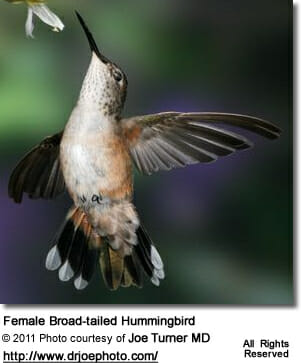 Migratory populations breed across mountain forests and meadows throughout the Western United States from eastern California and northern Wyoming south through Great Basin and Rocky Mountain states to southern Arizona and western Texas.

The tropical resident populations are found in the cordilleran mountain areas of northern Mexico ranging as far south as northern Guatemala.

The northerly birds migrate south to overwinter in the southern part of their range, which is upland Mexico to the highlands of Guatemala.

The wintering birds are somewhat vagrant are regularly seen in El Salvador where it doesn’t breed. 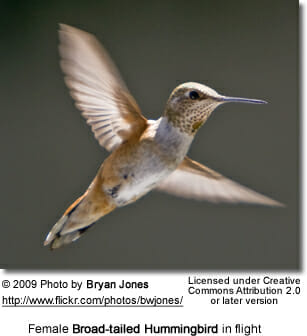 In winter, they may spend some time in coastal areas. They are also known to visit gardens inland.

These small birds are fairly common and are not considered endangered. They have adapted well to human-modified habitats and even greatly benefitted from it.

The Broad-tailed Hummingbirds primarily feed on nectar taken from a variety of brightly colored, scented small flowers of trees, herbs, shrubs and epiphytes. They favor flowers with the highest sugar content (often red-colored and tubular-shaped) and seek out, and aggressively protect, those areas containing flowers with high energy nectar.

In winter, when flowering plants may not be readily available, they may drink the sap from holes created by sapsuckers, as a substitute for nectar. They may also visit local garden feeders for some sugar water, or drink out of bird baths or water fountains where they will either hover and sip water as it runs over the edge; or they will perch on the edge and drink – like all the other birds; however, they only remain still for a short moment. 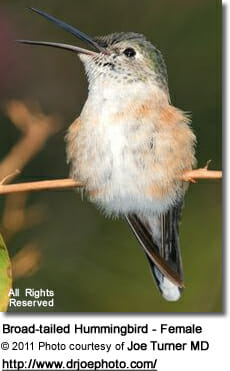 The female is responsible for building the small cup-shaped nest out of plant fibers woven together and green moss on the outside for camouflage in a protected location in a shrub, bush or tree.

She usually nests in the same tree or bush year after year. She will either build a nest on the same branch or even build a new nest atop the old one. The average clutch consists of two white eggs, which she incubates alone for about 16 days, while the male defends his territory and the flowers he feeds on. The young are born blind, immobile and without any down.

As is the case with other hummingbird species, the chicks are brooded only the first week or two, and left alone even on cooler nights after about 12 days – probably due to the small nest size. The chicks leave the nest when they are about 23 days old.

This species is known to hybridize with Costa’s Hummingbird, but apparently only very rarely.