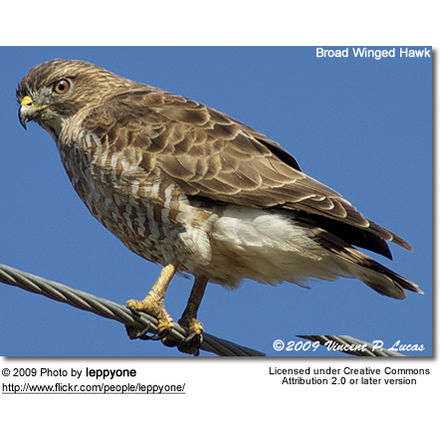 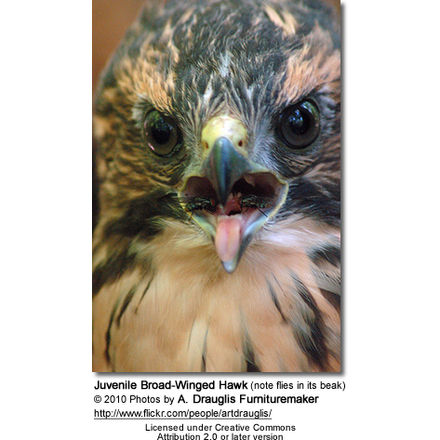 The Broad-winged Hawk (Buteo platypterus) is a small hawk of the Buteo genus.

During the summer they are distributed over most of eastern North America, to as far west as the Alberta province and Texas; they then migrate south to winter in the neotropics from Mexico down to Southern Brazil.

Many of the subspecies in the Caribbean are endemic and most do not migrate.

At all times, Broad-winged Hawks inhabit forested areas, with even migratory birds choosing only wooded areas to roost in. They are seemingly indifferent to the type of forest used either for breeding or wintering.

Broad-winged Hawks are long-distance migrants, except for the Caribbean subspecies. They travel in large flocks or “kettles” during migration. During days with favorable winds, enormous kettles of tens of thousands of Broad-wings can be seen along flyways.

Although this bird’s numbers are relatively stable, populations are declining in some parts of its breeding range because of forest fragmentation. 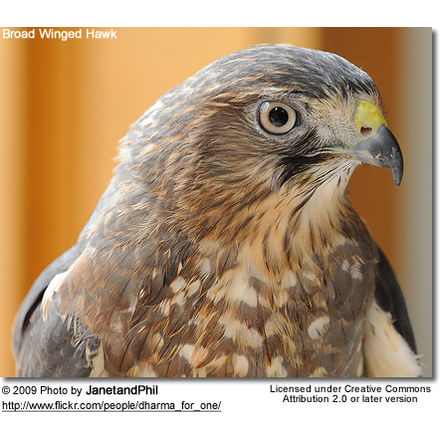 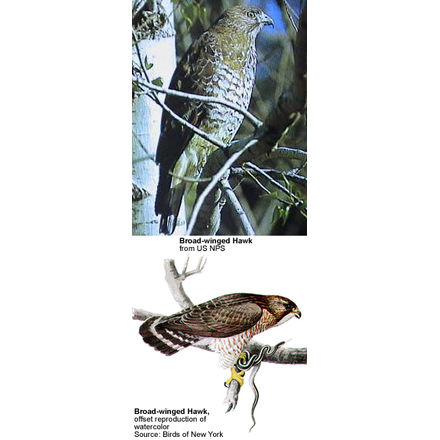 As in most raptors, females are slightly larger than males. Adults have dark brown upper parts and evenly spaced black and white bands on the tail.

There are two colour forms:

Dark-morph Short-tailed Hawks are similar but are whitish under the tail with a single subterminal band. Broad-winged Hawks’ wings are relatively short and broad with a tapered, somewhat pointed appearance unique to this species.

In the springtime, the breeding pair build a stick nest relatively low in a mature tree.

The young first leave the nest at 5 to 6 weeks of age, and linger around the nest site for up to 8 more weeks.

Predators of eggs and nestlings include raccoons, crows, porcupines and American Black Bears. Predation of adults and immatures is not well known, but they are known to fall victim to Great Horned Owls and Bald Eagles. 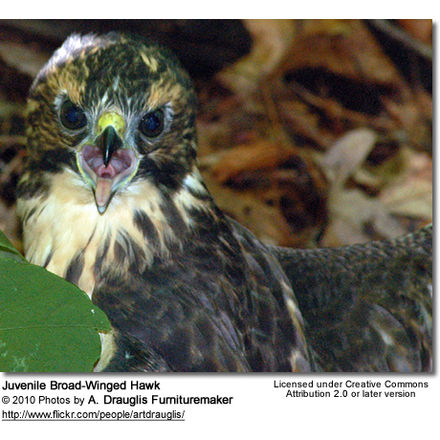 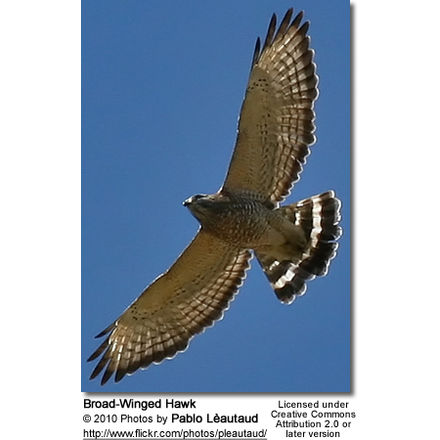 These birds hunt by sitting on a perch and watching for prey, and have been described as “cat-like” while stalking. When prey becomes apparent, they swoop down to the forest floor after it. Rarely, they will also fly in search of prey.

The diet is variable, but small mammals, like rodents and shrews, are the most regular prey. More than other North American Buteo hawks, they are thought to take many amphibians, reptiles, insects and other invertebrates. Birds up to the size of Ruffed Grouse (but usually much smaller) are also sometimes taken.