The Bronze Turkey is a breed of domestic turkey. It is named for its unusual color, a shimmering green-bronze which appears metallic, if viewed in sunlight.

The Bronze has been the most popular turkey throughout most of American history, but waned in popularity beginning in the mid-20th century.

This turkey is commonly found in two types:

Both are rare in North America. 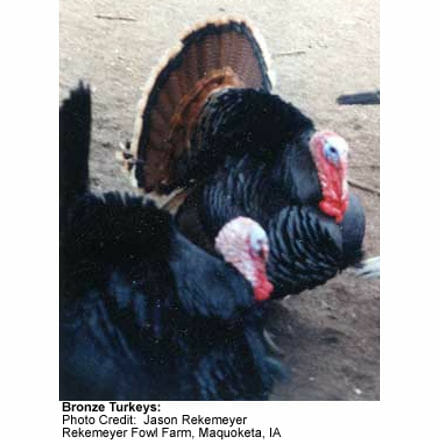 The turkey is native to North America and was domesticated by the Aztecs in Mexico 500 years ago. Turkeys were taken to Spain beginning in 1500 and rapidly became known across Europe.

The Pilgrims and other settlers brought turkeys with them to New England where they were crossed with wild indigenous stocks.

This hybrid type was itself taken back to England where a game keep named John Bull began to select for a broader breast.

He emigrated to Canada and brought turkeys with him, selling them in North America as “broad-breasted” turkeys.

The unimproved Bronze is not the same breed as the wild turkey, though they able to interbreed, which is a cause for concern to some wildlife managers.