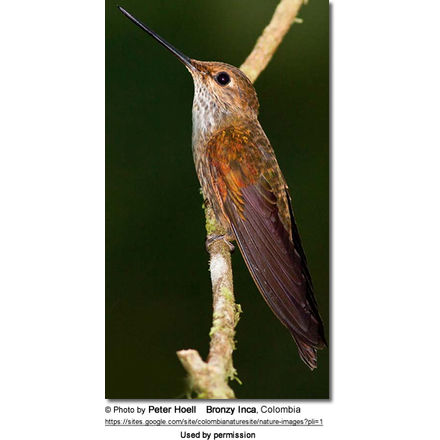 The Bronzy or Bronze Incas (Coeligena coeligena) are South American hummingbirds that were named for their bronze-colored plumage.

The Bronzy Incas occur naturally from northern Venezuela south through the Andes of Colombia, Ecuador and Peru into Bolivia.

They are most common along the edges of subtropical or tropical moist montane forests and in cultivated area (such as coffee plantations) – from 1,500 to 2,600 meters.

The Bronzy Inca measures about 5″ or 12 cm in length, including bill and tail. The straight and slender bill is about 1.3″ or 33 mm long.

The plumage is mostly iridescent purple. The upper plumage ranges from a rich violet to a glossy red. The tail coverts have a golden-greenish sheen. The broad tail is suffused with the same purple tinge as the back. The plumage below is suffused with a greyish tinge. The throat and chest are greyish.

The Bronzy Inca Hummingbirds primarily feed on nectar taken from a variety of brightly colored, scented small flowers of trees, herbs, shrubs and epiphytes. These trap-line feeders favor flowers with the highest sugar content, in particular those of the Fuchsia and Heliconia plants.