It included the Black-faced Ibis as a subspecies, but these two are now by most considered separate species, based on physical and habitat differences.

The Buff-necked Ibis occurs naturally in eastern and northern South America, where it inhabits open habitats, such as fields, marshes, savanna and grassland.

Vagrants have been recorded in Panama.

This species is mostly restricted to tropical and warmer subtropical lowlands.

This species is resident (non-migratory), but local movements may occur in their search for food. 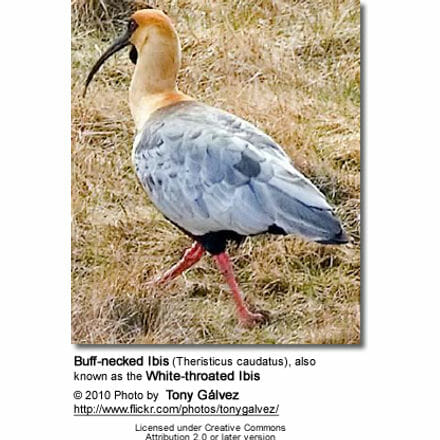 This fairly large ibis measures approximately 75 cm (30 inches) in length (including the tail).

The back and lower chest are grey, the abdomen and flight feathers are blackish, the neck is buff-colored and there is a large white patch on the wings.

The bill and bare skin around the eyes are blackish and the legs are red.