The Buff, or Jersey Buff, Turkey is an historic variety of the mid-Atlantic region named for the beautiful color of its feathers.

It was accepted by the American Poultry Association in 1874 but was never widespread. So unfortunately, by the early 20th century, the Buff turkey was already rare.

One obstacle to the breed’s success was the difficulty of breeding birds to fit the color standard, which called for even buff throughout with light flight feathers. The breed’s color was advantageous for processing because of the nearly white pinfeathers, though the Buff was not extensively selected for other performance qualities.

Buff turkeys were used in the development of the Bourbon Red variety early in the 1900s. The Bourbon Red, selected more purposefully for performance and promoted more widely, gained prominence, causing Buff numbers to decline.

Today, there are very few Buff turkeys kept at the seasonal hatcheries in the US and a small number are being raised by exhibition breeders.

It is difficult to have the Jersey Buff males and females match in color since the females tend to lighten with age, especially after a molt. For both toms and hens, the shanks and toes are bluish-white or flesh colored, the beard is black and the eyes are hazel. 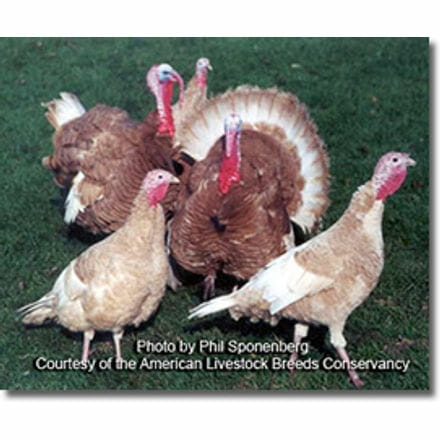 Young toms weigh about 21 pounds and mature hens about 12 pounds, both present a clean carcass when dressed. The Jersey Buff has not been recently selected for production attributes, including weight gain and many birds will be smaller than stated.

The hens have been known to be good egg producers. Careful selection for good health, ability to mate naturally, and production attributes will help ensure the survival of Buff turkeys.

The Buff Turkey is a calm bird and easy to work with and would be ideal for a small scale or hobby farm.