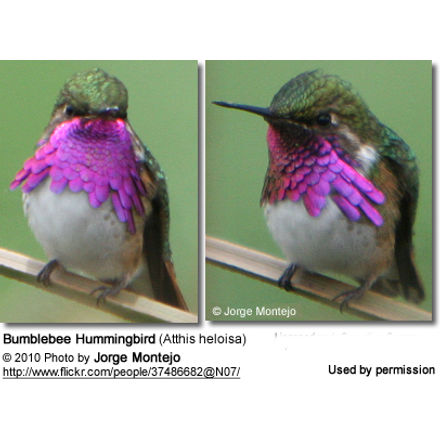 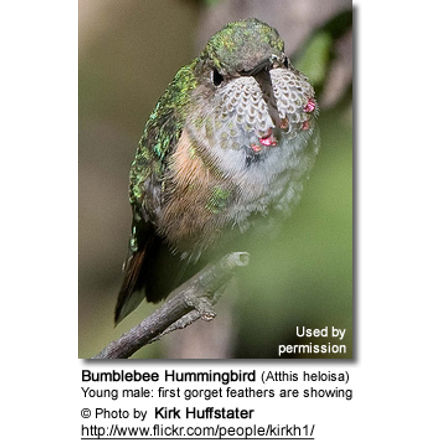 The “Smallest Bird” In the World Controversy

Bumblebee Hummingbirds are found year-round in the montane forests of Mexico north to the Isthmus of Tehuantepec and a small number of them migrate to southern Arizona in the summer to breed (it has been spotted a couple of times in the Huachuca Mountains). Its natural range is nearly 115 830 square miles or 300,000 square kilometers, but it is uncommon in portions of its native range. They typically inhabit subtropical or tropical moist montanes.

Bumblebee hummingbirds are preyed upon by birds of prey, frogs, fish and tropical spiders

The Bumblebee Hummingbird is the second-smallest bird known to be in existence – second only to the Bee Hummingbird.

It averages 2.75 inches or 7 cm in length and weighing, on average, 0.1 oz or 3 grams. They are comparable in size to bumble bees and are lighter than a Canadian or U.S. penny.

The upper plumage and sides are mostly green. The plumage below is whitish. The rounded tail is green with a rufous base.

The male can be identified by the violet-red gorget (throat patch).

The Bumblebee Hummingbird resembles the Lucifer Hummingbird, which also has a elongated purplish gorget, but can be differentiated by the Bumblebees hummingbird’s short and straight bill, and rounded tail with the rufous base. 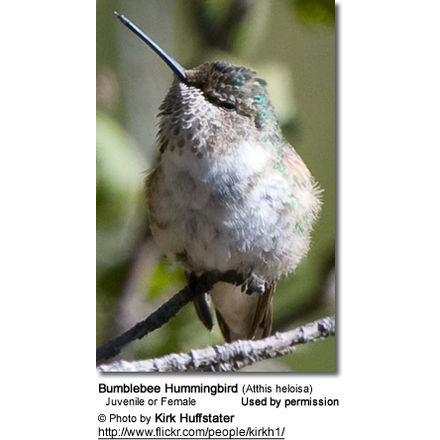 Bee Hummingbirds primarily feed on nectar taken from a variety of brightly colored, scented small flowers of trees, herbs, shrubs and epiphytes – visiting up to 1,500 flowers on an average day. They favor flowers with the highest sucrose concentrations.

They seek out, and aggressively protect, those areas containing flowers with high energy nectar. They use their long, extendible, straw-like tongues to retrieve the nectar while hovering with their tails cocked upward as they are licking at the nectar up to 13 times per second. Sometimes they may be seen hanging on the flower while feeding. They spend most of the day feeding as they have to eat half their total body mass and drink 8 times their total body mass in water each day to support their extremely high metabolism.

Bumblebee Hummingbirds may visit local hummingbird feeders for some sugar water, or drink out of bird baths or water fountains where they will either hover and sip water as it runs over the edge; or they will perch on the edge and drink – like all the other birds; however, they only remain still for a short moment.

Males establish feeding territories, where they aggressively chase other male hummingbirds, large insects, such as bumblebees and hawk moths that want to feed in their territory. They use aerial flights and intimidating displays to defend their territories. 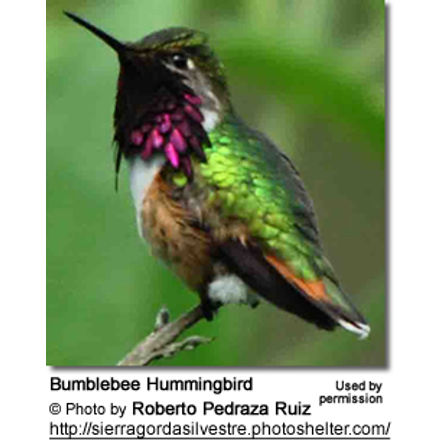 The breeding season usually commences at the end of the wet season and the onset of the dry season, when many trees and shrubs are flowering.

The female alone is responsible for building the small cup-shaped nest out of plant fibers (about 1 inch or 3 cm in diameter), woven together and green moss on the outside for camouflage in a protected location in a shrub, bush or tree. She lines the nest with soft plant fibers, animal hair and feather down, and strengthens the structure with spider webbing and other sticky material, giving it an elastic quality to allow it to stretch to double its size as the chicks grow and need more room. The nest is typically found on a low, thin horizontal branch between 3 to 20 feet from the ground.

As is the case with other hummingbird species, the chicks are brooded only the first week or two, and left alone even on cooler nights after about 12 days – probably due to the small nest size. The chicks leave the nest when they are about 18 to 38 days old.

Their calls are described as shrill and high-pitched “chip”, “ssssssssiu”.