Bourke’s Parrots aka Bourke Parakeets (Neopsephotus Bourkii) are endangered in their own homeland of Southwestern and Central Australia, but are popular in aviculture. 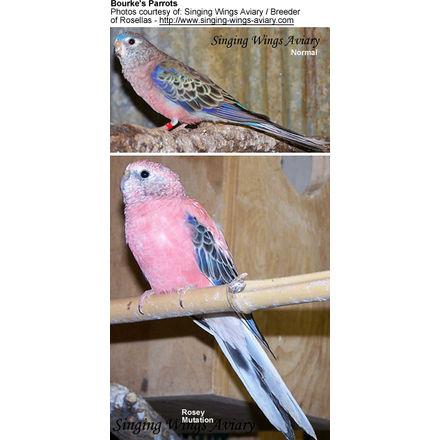 The Bourke’s Parakeets (Neopsephotus Bourkii) are endangered in their own homeland of Southwestern and Central Australia, but are popular in aviculture. They are readily available in the United States and relatively inexpensive.

The Bourke’s parrot has recently been removed from the Neophema genus and placed in a genus of its own. Some discussions about this change are still on-going.

The natural color of the Bourke’s Parakeet is basically brown, with pink abdomen, pinkish breast and a blue rump. The legs are dark-brown, with zygodactyl toes (the toes are arranged in pairs, the second and third toes pointing forward; the other two toes pointing backwards). The bill is yellowish-brown.

This parakeet can be visually sexed. Adult males have blue brown crowns while adult hens have white brows and hens and juveniles have a full grey head.

In the normal form the head and back are a scaled grey with the chest and abdomen being a pink shade. The wings and tail are etched in blue. To the right, there are photos of the beautiful pink mutation. 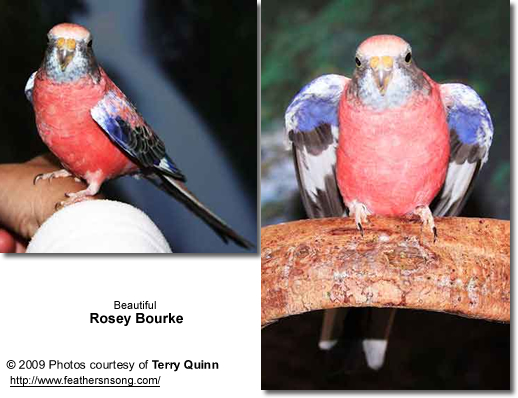 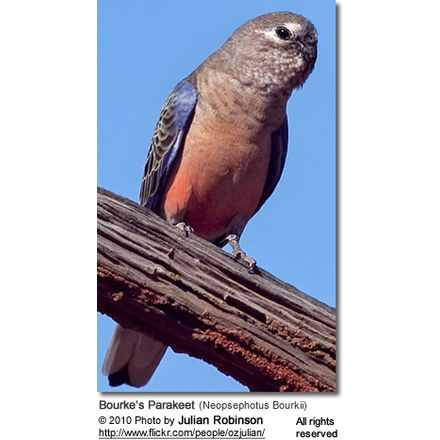 These parakeets are quiet, gentle and unassuming, with very endearing personalities. They are not known to be aggressive with other species – even smaller than themselves (i.e., finches, canaries). However, their gentle nature may make them an easy mark for aggressive birds.

They do well in planted aviaries; they are not likely to destroy any woodwork and breed readily. They will accept any parakeet nest box, as high up as possible to give them some sense of security and privacy. Providing more boxes than pairs will reduce the bickering over the favorite boxes.

The average clutch consists of 3 to 6 eggs, which are incubated by the female for 18-19 days. The young fledge when they are about 4 weeks old. The female also feeds and tends to the chicks by herself. While the female Bourke’s Parrot is incubating the eggs, and also while she is feeding the chicks in the nest, she is fed by the male.

Their expected lifespan is 10-15 years. However, some well-cared birds have surpassed this lifespan by several years.  Please refer to below web visitor communication:

Tina Cox: “[M]y Bourke’s parakeet will be 21 years old next month. I’ve had him since he was 4 months old. He looks very young and healthy…no beak or toenail issues, great feathers.  I haven’t done anything too special and he’s thriving. His staple foods are Cockatiel nutriberries (he doesn’t like the parakeet nutriberries), almonds as treats and daily fresh water. I keep his cage larger than necessary, clean and with a some daily sunlight peeking in for vitamin D or he has seizures. I’m just trying to educate the public since Bourke’s aren’t a popular household bird breed and I’ve learned so much the past 20+ years. I can’t believe he’s still happy and healthy.”

Photos and below information are courtesy of Mandy and Paul – Breeder of Canaries and Other Exotic Birds – Singing Wings Aviary – www.singing-wings-aviary.com (A great source for these delightful parakeets). 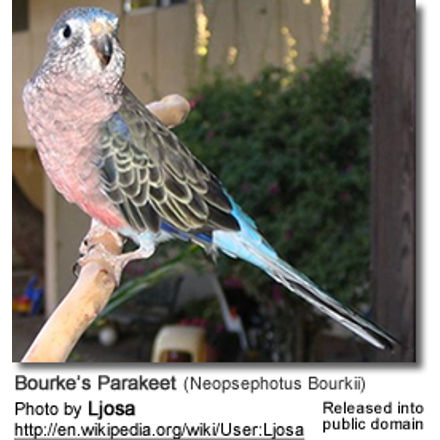 There are several Splendid mutations such as the Opaline (Rosey), White Face Pink, Cinnamon, Fallow, Cream, Lutino and Rubino.

The diet for the Bourke should include a mixture of canary seeds and millets along with safflower and some sunflower seeds. Kale, boiled egg, spray millet, broccoli, grated carrot, corn and chopped apple can also be offered. We have offered other fruits and veggies but the above seem to be the ones they normally chose to eat.

This species is relatively hardy as long as not exposed to ongoing damp conditions.

This species is not very flighty being most active at dawn and dusk. They are social and do enjoy the company of other birds or people. Young handfed birds make excellent pets and can be kept in med. size parrot cages as long as they have ample time out of the cage. Parent raised birds will enjoy a mixed aviary or the company of its own species. I would suggest a min. cage space of 30 x 18 for a pair although we breed our Bourkes in a same species aviary with several pairs and nest boxes hung throughout. They do best in temps between 60-85 degrees.

This species has no true song and are pretty quiet but do make the occasional melodious chirps and whistles. They are not known for talking.

Established pairs can become very prolific and may breed any time of the year given the right conditions. We use a 12 x 10in. nestbox for our pairs.

When ready to breed the hen will lean forward on the perch and make small chirping noises. In most cases the male will be more than willing to accept her request.

The hen normally lays 4-6 eggs though the average clutch to hatch seems to be 3-4 babies. After the third egg is laid she will incubate them for 18-20 days. The male rarely accompanies the hen in the nestbox but will often make frequent visits in which he feeds the hen.

The hen is normally a tight sitter and will be reluctant to move from the eggs. Young bourkes normally leave the nest at 4 weeks of age.

At 7-8 weeks of age the young are independent and can be moved from the parents.