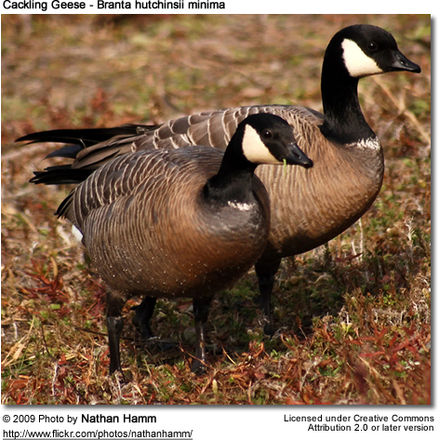 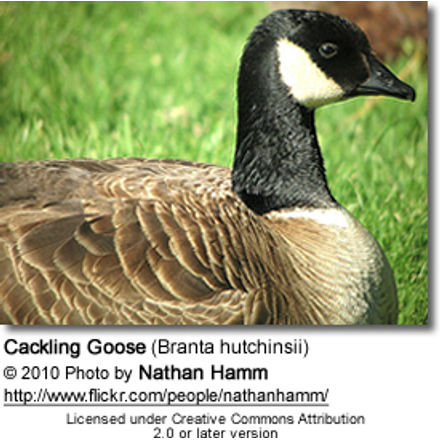 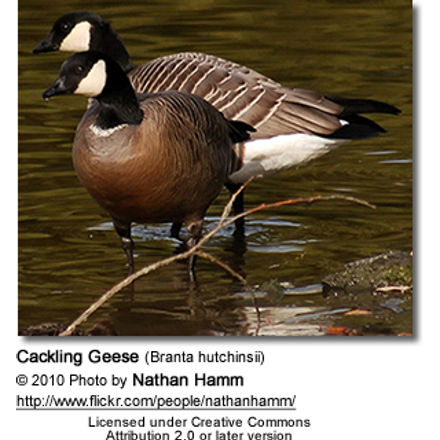 The Cackling Goose (Branta hutchinsii) occurs in North America, where it is regionally common.

This species has adapted well to living in urban and suburban areas and are commonly found on lakes, ponds and rivers.

In the past, the Cackling Goose was considered to be a smaller subspecies of the Canada Goose.

However, in July 2004, the American Ornithologists’ Union’s Committee split them up into two separate species based on genetic studies and differences in:

There are 5 subspecies of Cackling Goose, of varying sizes and plumage details.

This goose is easily recognized by its black head and neck, distinctive white patches on the face, light tan to cream chest and its otherwise brownish-grey plumage.

They are strong swimmers, divers and flyers. Cackling Geese are long-distance migrants and are well known for their V-shaped flight formation, during which the front position is rotated since flying in front consumes the most energy.

This species is protected in North America under the Migratory Bird Act of 1918, making it illegal to harm, take, or possess migratory birds, any parts of the bird, their nests or their eggs, except during the hunting season, or by special permit (MacGowan, Loven and Whitford).

Ironically, notwithstanding the “legal protection” of this species, lethal culling / mass slaughter of these birds are being employed – via extended hunting seasons, fatal gassing and poisoning – to control the exploding populations of Cackling Geese in urban or densely populated areas.

Animal-loving people treat them as pets feeding them regularly, which resulted in many more young being born and successfully raised than their natural conditions would have otherwise allowed.

Many people consider the exploding populations of Cackling Geese as nuisances because of their messy droppings. Flocks feeding in fields also cause considerable damage to agricultural crops. Geese can also get aggressive towards humans, particularly when they feel their young are threatened.

The male is referred to as “gander,” the female as “goose,” and the chicks are called goslings. A flock of geese on the ground is known as gaggle. Geese flying in the typical v-formation are referred to as “wedge” or skein.” 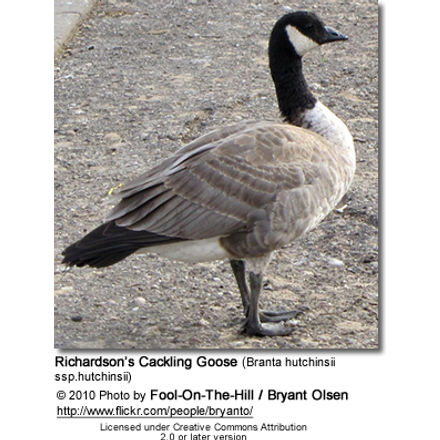 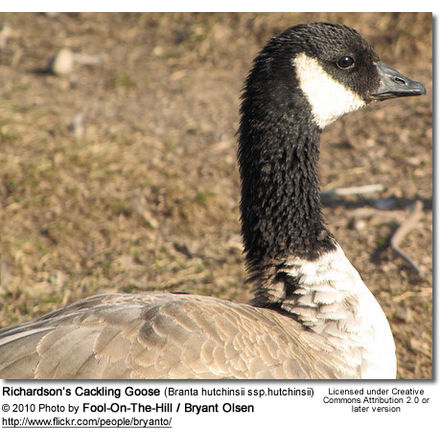 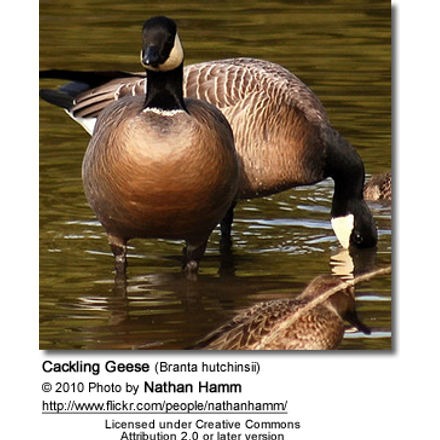 The plumage is mostly greyish-brown, with the exception of the black head and the long black neck, the whitish chest and characteristic white patches on the cheeks that run under its chin like a strap (commonly referred to as “chin straps”). The chest is light tan to brown.

The large webbed feet and wide, flat bill are black. The bill has lamellae (miniature ridges inside the bills of water-feeding birds or “teeth”) around the outside edges of the bill that are used as a cutting tool.

In flight, their large, dark wings can be seen, and possibly a U-shaped white rump and white under-tail feathers.

Differences between Cackling and Canada Geese

The black head and black, long neck with white “chinstrap” distinguish the Cackling Goose from all other geese, except the generally larger Canada Goose and the similarly sized Barnacle Goose.

The Cackling Goose looks like a smaller version of the more common Canada Goose; but can usually be identified by its smaller size – although an overlap in size between the larger subspecies of Cackling Geese (B. h. hutchinsii – weighing between 3 – 4 lbs – a little larger than the well-known mallard) and the smaller subspecies of Canada Geese (weighing between 5 – 15 lbs) can make identification by size difficult.

Their voices are higher-pitched than those of the Canadian Geese.

Males and females look alike, although females are usually a little smaller than the males and have a different voice.

Immature birds have a duller head and neck coloration.

During the breeding season (typically late-June to mid-July), Cackling Geese, undergo a complete simultaneous replacement of all their flight feathers, leaving them unable to fly for about a month – until the new flight feathers have grown in. During this time, they are particularly vulnerable to predation and prior to this molt, they typically move to safe area near water with readily available food and an unobstructed view for predators or danger. The new flight feathers grow back in time for their migration back to their wintering territories.

The first ones to undergo this molt are typically non-breeding juveniles, non-nesting adults and adults whose nests have been destroyed. 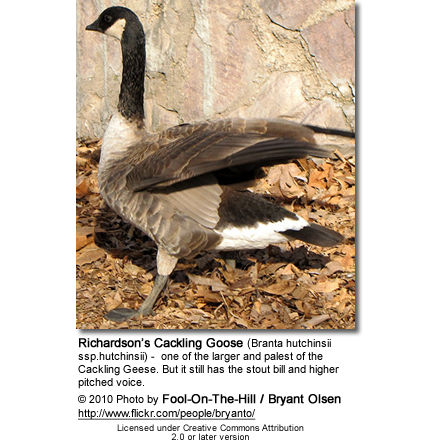 Cackling Geese have a large range, breeding across western Alaska, eastward through central Yukon across northern Canada to Baffin Island. They breed farther north and west than the related Canada Geese.

For the winter, they migrate to southern North America, from British Columbia southward to California and eastward to northern Mexico and western Louisiana.

Cackling Geese are vagrants to Western Europe, as well as Kamchatka Peninsula in eastern Siberia, eastern China and throughout Japan.

In some areas, migration routes have changed due to changes in habitat and food sources.

Cackling Geese are highly social creatures and – outside the breeding season – are usually seen in groups.

During the breeding season in particular, male Cackling Geese can be very aggressive towards intruders or predators, including readily attacking humans that get too close to their nests or young.

They also defend their territories against other (unfamiliar) geese, grabbing each other’s chest with their beaks and landing blows with their wings.

These attacks are typically preceded by them lowering their heads to the ground with the beak open, pumping the head up and down, and making hissing sounds.

When charge against humans,, they usually stand erect, spreading their wings and producing a hissing sound followed by the attack, which usually involves biting and wing flapping.

Cackling Geese reach reproductive maturity when they are about 2 years old; and their first nesting usually occurs during the spring-summer of their third year. They usually find their mates during the second year of their lives.

Cackling Geese tend to choose mates that are similar in size (“assortative mating”) and typically mate for life. However, if one perishes, the other will select a new mate.

Most nesting activities are observed between April and June.

Cackling Geese breed in coastal marshes, along tundra ponds and streams. The females alone choose the nest-site, typically beneath shrubs or small trees, placing the nest on a slightly elevated patch of wetland vegetation, an elevated artificial nest platform; except for the Aleutian Cackling Goose which typically nest on south-facing turf slopes above rocky shorelines.

The nests are typically located in an area with good visibility and within 150 feet (45 meters) of water, such as streams, lakes, ponds and sometimes on beaver lodges. Even though pairs may nest within 10 feet (3 meters) of each other, they tend to prefer areas with low nest concentration, except for those nesting on cliffs, where colonies of several hundred pairs can be found. They typically return to the same general nesting site year after year.

The female builds the nest, a shallow bowl with a slight depression in the center. The nest is made of sticks, grasses, reeds and weeds, and lined with down feathers plucked from the female’s chest and soft plant material.

Both the male and female defend the nest before egg laying and after the eggs have been laid, the male alone defends the nest while the female incubates the eggs. They usually only produce one brood a year, but if a clutch is destroyed, may start on a second.

A clutch can consist of 2 – 8 creamy-white eggs (mostly 4 – 6). Eggs are laid one every one and a half days apart. Only after a clutch is complete will the female commence incubation, which lasts about 25 – 30 days to hatching. While brooding the eggs, the female turns the eggs over often as is necessary for optimum development of the embryo. (Eycleshymer, 1907: New, 1957; Robertson, 1961a; Deeming, 1989). The hatching chicks break out of the shell by using an “egg tooth” – a hard growth on top of their beaks, which diminishes not long after hatching. It may take 8 – 36 hours for them to completely break out of the shell (French and Parkhurst, 2001).

The hatchlings are covered in down and their eyes are open. They are able to walk, swim, dive and feed themselves within 1 – 2 days after hatching. At this point, the goslings are led to feeding areas by their parents.

The parents are seen leading their young in a line – usually with one parent at the front and the other at the back.

The parents will protect their young, first warning intruders / predators with a hissing sound and then chasing them away. When the young are 7 – 10 weeks old (depending on the subspecies), the goslings are self-supporting and capable of sustained flight. However, the young usually remain with their parents until after the spring migration – when they return to their birthplace.

Goslings from several family broods may form “gang broods” – and these groups may contain up to 100 goslings.

During the incubation period, the adults lose their flight feathers and can’t until after the chicks hatched. 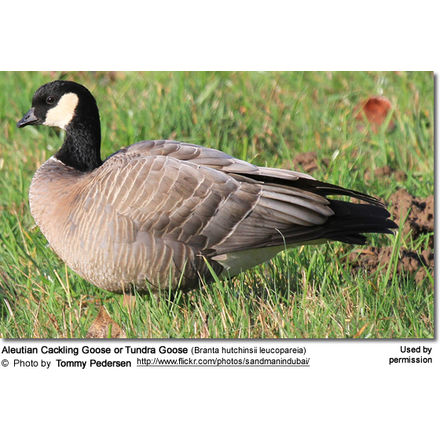 Cackling Geese are usually very vocal and are known for their deep “honking” calls – often heard in flight.

They make hissing sounds when threatened.

Cackling Geese in the wild can live 10 – 25 years. Captive birds that are well taken care of could possibly live to 35 or even 40 years. .

Adults are most often injured or killed by human hunters.

Many succumb from heavy metal poisoning – picked up from contaminated mining sites, but also caused by the ingestion of lead shots during the hunting season and lead fishing weights).

Cackling Geese are mostly herbivores – feeding on green vegetation (including a variety of grasses, pondweed, clover, cattails, bulrushes and algae), grains and berries (if available) found in shallows, marshes and fields.

Sometimes they will also eat small insects, fish, small crustaceans and mollusks that are attached to aquatic vegetation – particularly when breeding or feeding young, as they need more protein in their diet for their development.

On land, they graze while walking, grasping a plant with its bill and tearing it with a jerk of the head. They will take grains, such as wheat, beans, rice and corn. They will typically eat those plants just as they first emerge after planting, and again when the seed head matures.

In water, they feed on submerged aquatic vegetation (such as seaweeds) by reaching under the water with their long necks or by upending (feeding upside down in water).

In urban cities, they will accept food they are offered by humans or pick food out of garbage bins.

They typically feed in early morning and late afternoon. When migrating, they may also feed at night.

Food moves fast through its digestive system – sometimes in an hour or even quicker. Therefore, these geese have to take in a lot of food to get the needed nutrition and produce large amounts of feces (Elvecrog).