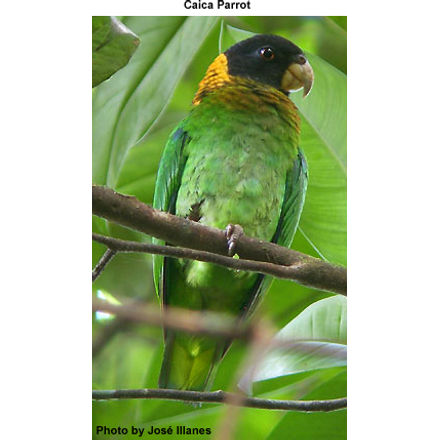 Caica Parrots average 9.2 inches (23 cm) in length (including tail). The plumage is generally green, with the exception of the brownish-black head, a broad orange brown ring around their neck, and blue and black on their wings.

The lower breast, abdomen and under tail-coverts are yellowish-green. Each feather edged brownish. The throat and the upper breast are dull olive-brown. The bend of the wing has a pale blue tinge. The primary wing feathers are dark blue with green edging to the outer webs. The flight feathers are black with green outer webs. The underside of the flight-feathers are bluish-green. The middle tail-feathers have blue tips. The outer tail-feathers have yellow marking to the inner webs. The bill is a whitish-horn color. The irides (= plural of iris) of the adults are orange-red; and the cere and feet are grey.

Immature birds have a greenish head. The cheeks and ear-coverts have an olive-green tinge. The band to the nape (back of the neck) is dull yellowish and without any brown edging. The throat and breast are green with an olive-yellow tinge. Their irides (= plural of iris) are dark.

The Splendour Parrots are very quiet in an aviary, with an endearingly friendly and gentle personality. They are highly social and should be kept with a mate or in a group environment. In the wild, Superb Parrots are almost always found in flocks. They acclimatize fairly easily to a new environment and are very hardy … Talking Abilities (compared to other species).