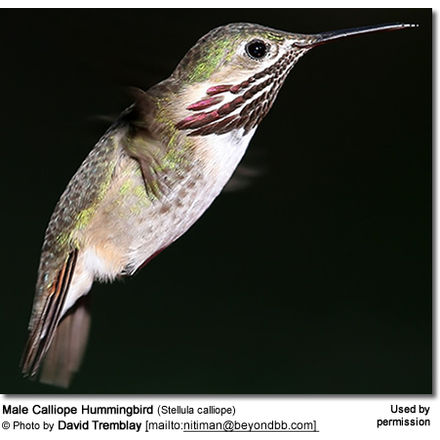 The Calliope Hummingbird (Stellula calliope formerly Archilochus calliope) is the smallest bird in North America (north of Mexico) – weighing only one-tenth of an ounce, with a length that rarely exceeds 3.5 inches, including its tail.

Additionally, this tiny bird is the smallest long-distant migrant bird in the world – traveling as far as 9,000 km (5,600 miles) from the cold and harsh higher elevations of the western United States and Canada, to winter in southern Mexico.

They are most common in high mountain areas – and have been observed at elevations as high as 11,000 feet.

This hummingbird was named after the Greek muse Calliope. 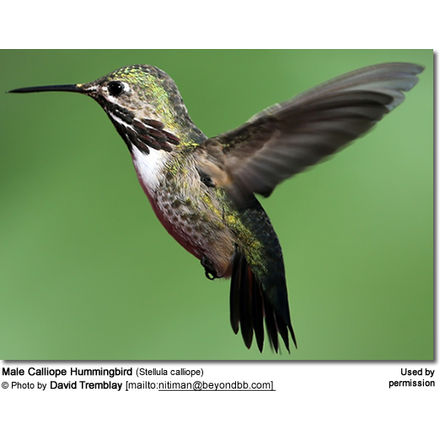 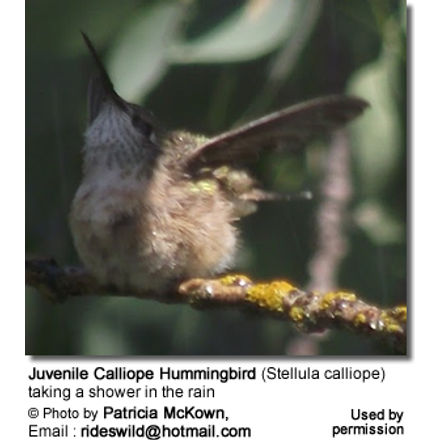 The Calliope Hummingbirds primarily breed at high elevations in the mountains of northwestern United States and Canada into Alaska. In Canada, they occur from southern British Columbia and Alberta south to Colorado, Nevada and southern California and Arizona. They have also been recorded in Mississippi, Arkansas, Alabama, South Carolina, Georgia and Florida, north to Connecticut and in 2013 one vagrant has been photographed as far north as Manchester, New Hampshire.

Within their breeding range, they favor open shrubby areas.

They are leaving their breeding territory earlier than most birds – although not as early as the Rufous Hummingbird – to take advantage of the wildflower season in the mountains of western North America.

Historically, they migrate south to winter in southwestern Mexico. However, in the last years an increasing number of them are now instead migrating to the eastern United States for the fall and winter season. Calliope Hummingbirds have been identified in Fort Tryon Park, New York, and one record exists of one being identified and banded in Lighthouse Point Park in New Haven, Connecticut, in December 2006. During migration, they can be found in nearly any kind of habitat. 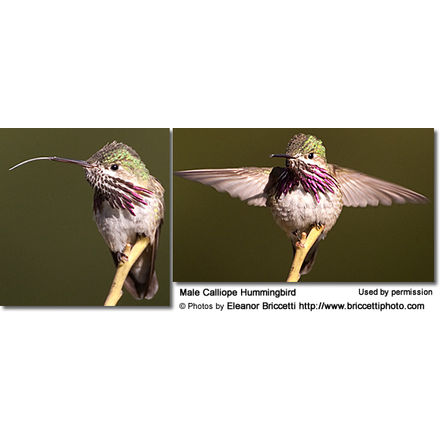 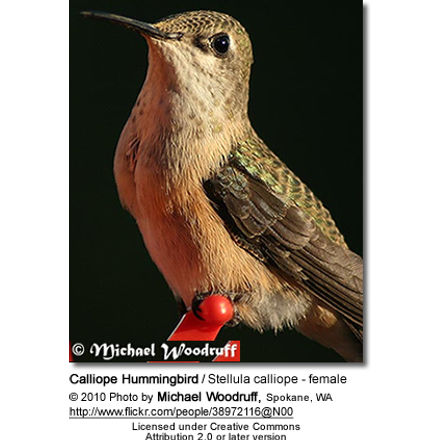 The Calliope Hummingbird is a tiny hummingbird. The average male weighs as little as 2.5 grams or 0.09 ounces. The female tends to be a little larger, averaging 2.83 grams or 0.10 ounces. It is about 3.5 inches or 9 cm long – including its tail.

Common physical traits: The upper plumage is mostly a glossy green; the under plumage is creamy white. Their beak and tail are relatively short.

Adult males have a white throat with iridescent elongated gorget (throat) feathers that form wine-red or purple streaks and — when erected – show a “whiskered” effect. He has green sides and a dark tail.

Adult females have a dull whitish throat with dark streaks, a pinkish wash on the sides and a dark, white-tipped tail. The chest and abdomen are cinnamon-buff colored.

Juvenile birds resemble adult females. When viewed up closely, they can be distinguished from the adult female by the presence of ridges along the upper beak.

Similar Species: They are easily confused with the Rufous Hummingbirds and the Broad-tailed Hummingbird. 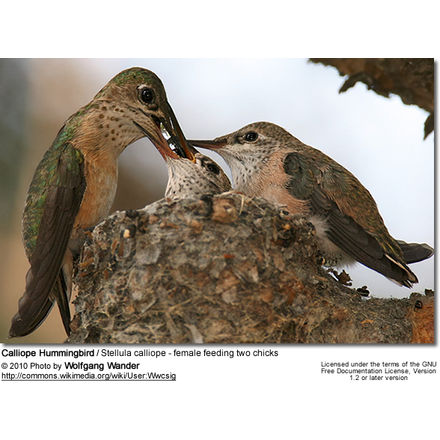 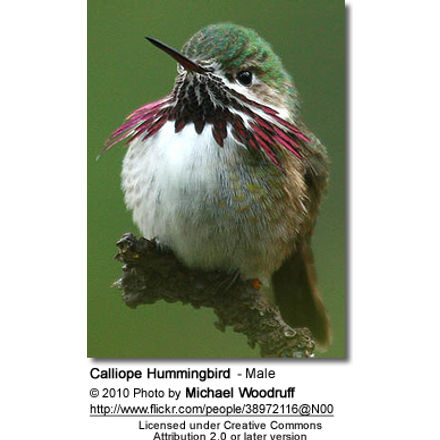 The Calliope Hummingbird breed in open forests, meadows as well as canyons in high mountains, often along streams.

The female is responsible for building the open cup-shaped nest out of plant fibers woven together and green moss on the outside for camouflage in a protected location in a shrub, bush or tree – typically underneath an overhanging branch of a conifer tree.

The nest is often situated over creeks or over roads next to streams or lakes. Many times they will repair the previous year’s nest or construct a new one atop the old.

The average clutch consists of two white eggs, which she incubates alone for about two weeks, while the male defends his territory and the flowers he feeds on. The young are born blind, immobile and without any down.

As is the case with other hummingbird species, the chicks are brooded only the first week or two, and left alone even on cooler nights after about 12 days – probably due to the small nest size. The chicks leave the nest when they are about 21 days old. 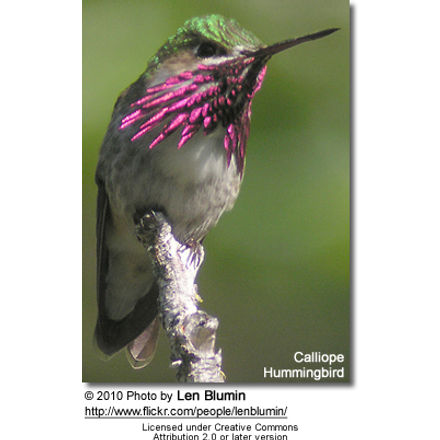 The Calliopes primarily feed on nectar taken from a variety of brightly colored, scented small flowers of trees, herbs, shrubs and epiphytes. They favor flowers with the highest sugar content (often red-colored and tubular-shaped) and seek out, and aggressively protect, those areas containing flowers with high energy nectar.They use their long, extendible, straw-like tongues to retrieve the nectar while hovering with their tails cocked upward as they are licking at the nectar up to 13 times per second. Sometimes they may be seen hanging on the flower while feeding.

When flowering plants are not readily available (such as during the winters), they may drink the sap from holes created by sapsuckers as a substitute for nectar. They may also frequent local hummingbird feeders for some sugar water, or drink out of bird baths or water fountains where they will either hover and sip water as it runs over the edge; or they will perch on the edge and drink – like all the other birds; however, they only remain still for a short moment.

Calliope Hummingbirds may also take some small spiders and insects – important sources of protein particularly needed during the breeding season to ensure the proper development of their young. Insects are often caught in flight (hawking); snatched off leaves or branches, or are taken from spider webs. A nesting female can capture up to 2,000 insects a day.

They usually forage within five feet of the ground, feeding low in the flowers and typically staying away from more aggressive competitors.

Calliopes are generally silent, but an occasional high tsip – sometimes repeated – can be heard. 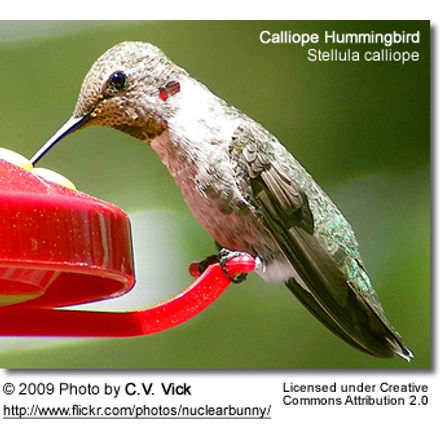