The Campbell Albatross or Campbell Mollymawk, Thalassarche impavida, is a medium sized mollymawk in the albatross family.

It breeds only on Campbell Island (New Zealand) and the associated islet of Jeanette Marie, a small New Zealand island group in the South Pacific. It is sometimes considered a subspecies of the Black-browed Albatross. It is a medium sized black and white Albatross with a pale yellow iris.

The adult has a white head, neck, rump, and underparts, with a black upperwing, back, and tail. The underwing is white with broad black edging. It has a black triangle around the eye that reaches the bill, which is yellow with an orange tip. They also have a pale yellow iris.

The juveniles have a brown-grey bill with a black tip, dark eyes and less black on the underwing.

The average life expectancy is 28 years.

The Campbell Albatross breeds on the northern and western coastline of Campbell Island and the islet Jeanette Marie. When breeding they forage from South Island and the Chatham Rise to the Ross Sea. Juveniles and non-breeders will go only through south Australian water, the Tasman Sea, and southwestern Pacific Ocean. 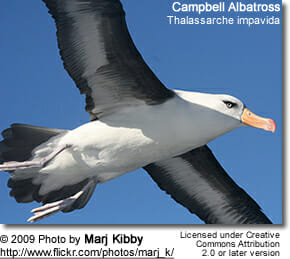 Breeding birds like to nest on ledges and steep slopes covered with low grass, tussock, or mud.

They start breeding at 10 years and they have a breeding success rate of 66%. Adults return to the breeding colony in early August and begin laying in late September.

The single egg is incubated for around 70 days. The chicks fledge after about 130 days after hatching.

The largest threat to this species are fisheries, both longline and trawlers.

The feral sheep that existed on Campbell Island were fully eradicated by 1991, and rats and cats were eradicated by 2001. Finally, studies are ongoing.

In 1998, Robertson and Nunn published the need for this species to be split off of the Black-browed Albatross, Thalassacre melanphrys.

Over the course of the next few years more experts agreed, starting with BirdLife International in 2000, Brooke in 2004. James Clements has not agreed yet, neither has `1q , and American Ornithologists’ Union (SACC) recognizes the need for a proposal.