The Campbell Ducks were originally introduced to the public in 1898 by Mrs. Adelle Campbell of Uley, Gloucestershire. She bred them from wild Mallards, Fawns and White Runners and Rouens with a goal to create larger-bodied offspring that would lay well.

Their average lifespan is about nine years. 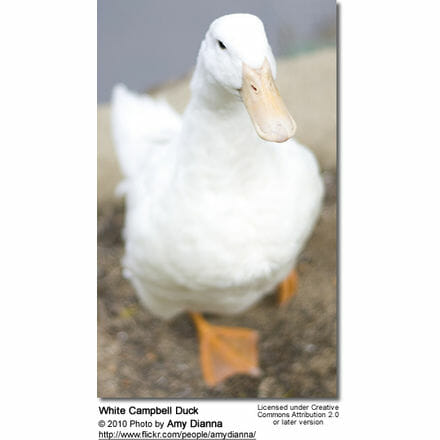 The Campbell is a medium-sized duck that typically weighs ~4 to 4 1/2 pounds. It has a modestly long head, bill, neck and body. The body should be full yet compact.

Its carriage is held slightly upright – although should be no more than 35 degrees (variations range from 20 to 40 degrees above horizontal), with the head held high. The plumage should be tight and sleek. 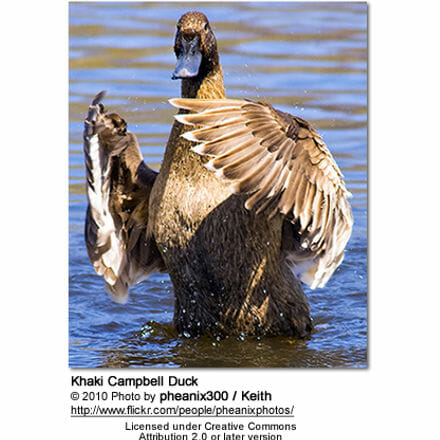 Campbells are quite adaptable and have done well in environments ranging from arid deserts with temperatures of 100F. to humid tropical rainforests to cold Northern regions where temperatures can remain below 0F for weeks at a time.” (Holderread, 41) It is, however, important to give them time to acclimatize.

Breeders should be robust, active and strong-legged birds, with a history of good laying and foraging abilities. It’s important to only acquire authentic Campbells – crossbreeds may have facial stripes or weigh above six pounds. Crossbreeds usually do not lay well.

Hens very seldom hatch out their own young. In this breed, brooding behavior has been sacrificed in exchange for prolific egg laying ability. Egg incubators or broody chickens are typically used to hatch out ducklings. It takes approximately 28 days for a Campbell ducklings to hatch.

Campbells are very energetic little ducks that should be provided plenty of space to move around. They may fly and, and if this presents a problem, clipping one wing is usually the solution.

Even though they do not necessarily require water for swimming, they do enjoy it. They prefer shallow waters — if no pond is available, a shallow tray or even a bowl with bricks in it will do.

They are excellent foragers that keep gardens and ponds free of slugs, snails and worms.

Campbells should not be kept in pairs. It is recommended that a male has 2 up to 10 females – depending on the drake’s energy levels. Flocks should consist of no more than 50 Campbell.

These ducks will rarely brood if the eggs are removed. 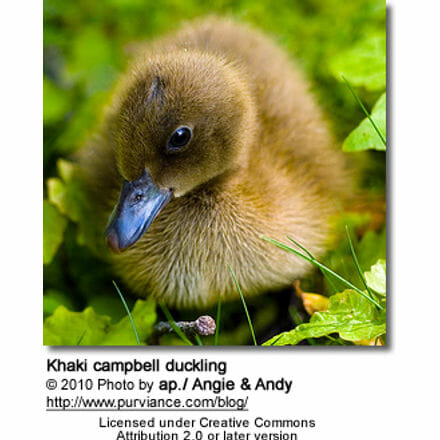 Mrs. Campbell’s goal when developing this breed was to produce an excellent egg-laying breed that was not broody and unlikely to fly off; in addition to providing a consistent supply of roast duckling. The efforts were successful and Campbells are said to have the best egg production of all ducks, laying anything from 50 up to 350 white eggs per annum. Khaki Campbells can produce up to 350 eggs per year; the White or Dark Campbells are generally less productive.

Each egg weighs about 2.5 ounces and has an excellent texture and flavor.

Most Campbells lay their first eggs when 5-7 months old and with an age staggered flock, one could have eggs year-round.