The Canarian Egyptian Vulture (Neophron percnopterus majorensis), or Guirre, is a large bird in the Gypaetinae subfamily of the Accipitridae.

It is an Egyptian Vulture subspecies which is endemic to the eastern Canary archipelago, in Macaronesia in the north Atlantic Ocean, where it is a scarce and endangered non-migratory resident.

There are three recognised subspecies of the Egyptian Vulture: 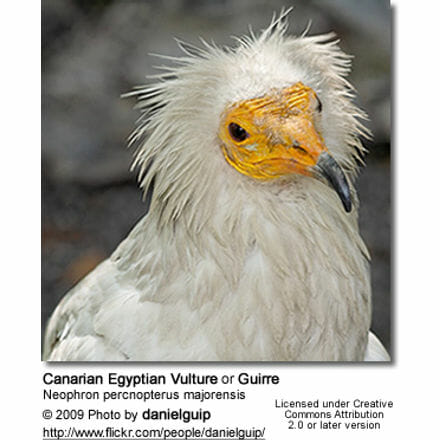 The Canarian Egyptian Vulture is larger than the other subspecies, averaging about 2.4 kg in weight, some 18% heavier than vultures of the nominate subspecies from Iberia.

Adults are mainly white in plumage, with black primary feathers, but often show varying amounts of rufous colouration, especially on the breast, crown, nape, median wing coverts and tail, from iron compounds in the local soils. The face is bare of feathers with yellow skin. The tail is diamond-shaped.

The Canarian Egyptian Vulture was historically common, occurring on the islands of La Gomera, Tenerife, Gran Canaria, Fuerteventura and Lanzarote.

Now it is restricted to Fuerteventura and Lanzarote, the two easternmost islands.

The total population was estimated in 2000 to comprise about 130 individuals, including 25–30 breeding pairs. It inhabits open, arid and rugged landscapes. 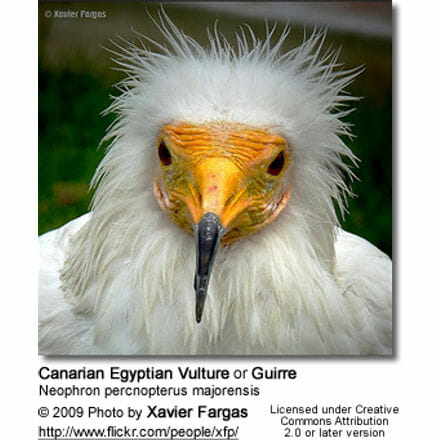 The Canarian Egyptian Vulture generally nests on cliffs and in caves and crevices. The nests are located in breeding territories, of which there are about 27 that are active, 25 in Fuerteventura and 2 in Lanzarote, with the nests normally being reused every year. Sometimes other nest sites are used in the same territory. Rarely the birds may nest on the ground.

The Canarian Egyptian Vulture is a scavenger and carrion eater.

Having undergone a major decline, leaving only a tiny relict population, the Canarian Egyptian Vulture is considered to be highly endangered. Threats to the birds include death from electrocution and collision with powerlines, illegal poisoning, and lead intoxication from ingesting bullets.

In 1998–2000 breeding success was very low, with only about 0.5 fledglings produced for each pair; theft of eggs and young from the nest, as well as other forms of disturbance by humans, may account for cases of breeding failure.

Conservation actions being taken or planned include measures to mitigate powerline mortality, increased surveillance of nesting areas and public education. A further planned action is the creation of middens, or “vulture restaurants”, with the cooperation of local livestock breeders, for the birds to find supplementary food.