The wild Canary is also known as the Atlantic Canary, Island Canary or Common Canary. This small finch was named for its native range: Spain’s Canary Islands in the eastern Atlantic.

The wild canaries (Serinus canaria) range in color from greyish to greenish-yellow with brownish streaking on the back; and the underparts are more yellowish.

The domesticated form (Serinus canaria domestica) – descendants of the wild canaries – are most easily recognized by their bright yellow plumage, which was developed through selective breeding. The well-known typical YELLOW domestic canary goes back to the seventeenth century, specifically 1670.

However, these popular little song birds have now been bred in a variety of bright, attractive colors and many varieties differing in song and appearance. The European country of Germany is considered the original area for training and breeding canaries. 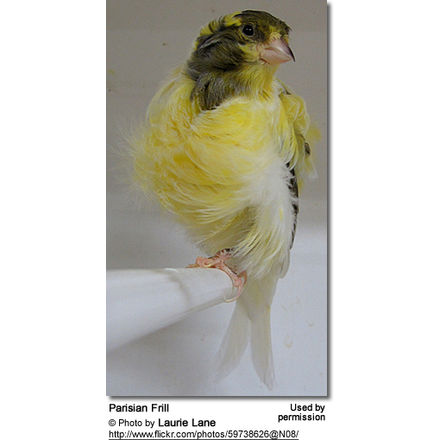 The canaries are most in demand for their attractive songs which are comparable to the silvery twittering sounds made by Goldfinches. Several breeds of song canaries have been produced – each one with their own unique and specific song patterns.

Many people don’t realize that these charming little birds can be taught to improve the quality of their songs and imitate a variety of sounds.

The domestic Canaries are amongst the most popular and common cage and aviary birds globally.

The wild Canaries originate from the Macaronesian Islands, where they inhabit semi-open areas, including orchards – from sea level up to an altitude of about 5,000 feet / 1,500 meters. 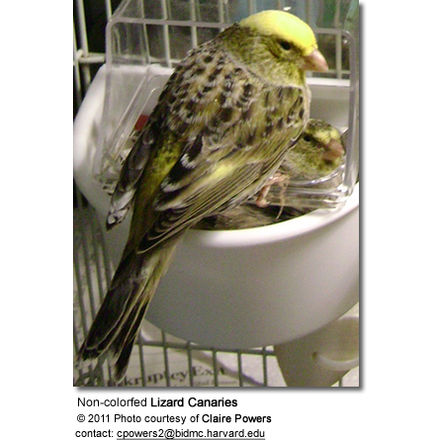 Feral introduced populations have also established themselves on the islands of Bermuda in the North Atlantic Ocean, located off the east coast of the United States.

Wild birds are mostly yellow-green, with brownish streaking on the back.

The most easily recognized domesticated form is bright yellow; however, many different color variations and other type canaries have been bred in captivity.

Caring for Canaries / Are They the Right Pet for You?

Canaries are absolutely delightful beings and fun characters to watch.

In an aviary setting, I found them to be very social beings. A little “friendly” fight here and there with their aviary co-habitants, but generally they get along really well and are non-aggressive.

However, in cages, these birds can be quite territorial and injury or even death can result from one of their fights. In cages, they are best kept alone.

They do make very pretty aviary birds – and the melodious song of the males add a lot to the charm of any aviary.

They are never going to be “cuddly pets”

.. and I know, having handfed some of them from day 1 (which is not an easy task). However, these charming birds do become quite confiding, and may eventually without fear perch on your finger or your shoulder.

They make a great choice for people who enjoy watching birds rather than having a demanding pet that requires a lot of personal attention.

I really hate to see them in small cages. Since these are birds that will just about ALWAYS be in a cage, I would hope that people give them a roomy flight cage – ideally with some plants in it too for the canaries to enjoy. They should be able to fly.

Make it a “project” to prepare an attractive flight cage for them, with lots of toys (no STRING toys though that might strangle them) and natural branches, maybe some plants.

Your canary should be kept in a room with plenty of natural light.  Do not place cage near a window where he may get a cold draft.  Since a male canary’s singing is stimulated by people movements, keep your canary in a room you occupy frequently.

You canary needs plenty of exercise and should be kept in a rectangular cage at least 10 inches wide and 17 inches long.

Be sure to cover your canary’s cage at night so the light stops with the sunset.  This keeps him in tune with the seasons. 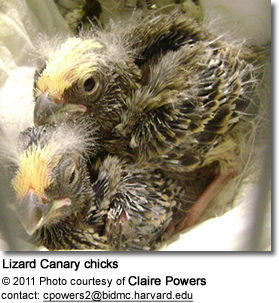 To ensure caged birds are happy, toys should be

provided and swapped regularly to avoid boredom (which can lead to aggression and feather plucking).

Toys must be safely constructed (no sharp edges or parts the bird’s feet could become entangled upon).

Most people keep males and females in separate cages, except during breeding season. When buying pet canaries, great care must be taken to ensure the right mix of sexes in a cage. A mistake could lead to the birds attacking each other, even to the extent that one may kill another.

In general, pet canaries don’t generally appreciate company in the same cage. Those will be seen as intruders, not as companions. The ensuing conflict is likely to eventually result in injury or even death.

A male and a female stand a better chance of getting along amicably, but all too often the less dominant bird will eventually die.

This is because the dominant bird will feel the need to constantly ‘oversee’ the less dominant bird. It will never be able to eat, sleep, or drink its fill in peace, and eventually the stress will take its toll.

If a bird is present in the home and a companion is bought, it must be kept in a separate cage for at least couple of weeks – both for quarantine, and to ensure the birds get used to each other; the new bird can then gradually be introduced to ensure that no fighting ensues.

A male and female will often get along reasonably well if introduced in this way, but should not be allowed to remain together all year round. Each should be allowed to have some privacy – during the period from midwinter until the start of breeding season in early spring, at the very least.

Two males will very rarely be happy together, although keeping them permanently in separate cages will prompt them to compete with the other male, prompting them to sing more than they probably would on their own. However a good recording of canary song will work equally well.

A cage with a number of males may work as long as no female is present. But again, they should not be expected to live in peace all year round, and each should be separated into an individual cage during the spring/early summer breeding season at the very least.

Male canaries can mimic sounds such as telephone ring tones and door bell chimes, but only if they hear these sounds while young. Canaries can be taught tricks over time but great patience is required as they are fairly timid birds. 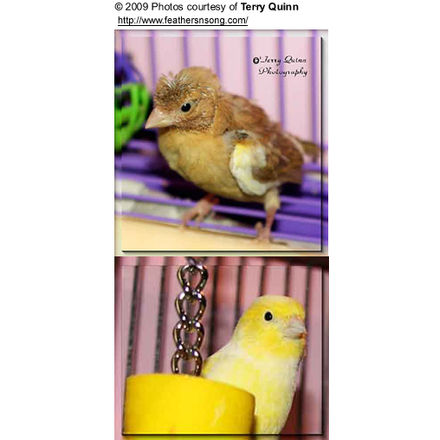 Canaries are well known for their delicate respiratory systems. This was one of the reasons why they were regularly used in coal mining as an early warning system.

They would succumb quickly to any toxic gases – such as carbon monoxide, methane or carbon dioxide – giving the miners a chance to escape before they themselves were affected.

Hence the phrase “canary in a coal mine” was born in reference to a person or thing which serves as an early warning of a coming danger.

Common household hazards include fumes from the kitchen (cooking fumes and especially fumes from non-stick pans)- canaries should never be kept in a kitchen for this reason. They are also sensitive to smoke from cigarettes, aerosol sprays such as deodorant, air freshener and polish.

Plug-in air fresheners or stand-alone fan fresheners are very toxic, as are some candles, especially scented ones (except unscented beeswax candles).

Of course, these airborne contaminants present a danger to all birds, not just canaries.

It’s also important to keep in mind that a number of houseplants/cut flowers are very poisonous to canaries (as are some herbs), so never let them nibble leaves of houseplants. However, many plants are safe for them to chew on, such as spider plants, african violets and boston ferns.

Food dishes/cage parts can be safely sterilized in a hot dishwasher or in baby-bottle fluid such as diluted Milton. When it comes to disease, prevention is better than cure.

Canaries should be examined for mites and, if mites are found (especially easy to spot around the neck and rump) they can be treated with over-the-counter medication (canary mites don’t bite humans).

Abnormalities of the skin and feet may be caused by mites and this can also be treated with over-the-counter pet medication.

Be aware that dietary problems can cause skin, foot, and feather problems that may look as if they are due to mite damage, so before treating with any drug, get an experienced opinion from a good avian vet on the actual cause of the condition.

If pet canaries become ill they will rapidly lose weight and this is why it is essential to treat disease as quickly as possible. It is wise to have glucose powder and an eye dropper in store to administer drops of diluted solution via the beak if a canary stops eating.

When a bird is sick, it puffs up its feathers to stay warm; give it gentle heat. You can often drape a heating pad over or under the cage, but be sure the bird can also get OUT of the heat if it wants.

Avoid placing a canary’s cage where it is in a draft, or be in full glare of sunlight without any shade available. If you let your canary out to fly about for exercise, always cover mirrors and windows, as they may fly into them and break their neck.

Canaries love bathing and should be allowed to bathe often. Offer cold water for them to bathe in, as it improves their feather condition. Warm water, on the other hand, will strip essential oils from the feathers, and may encourage itching and picking, rather than preening. Plentiful time to bathe is especially important to a canary during the moult.

Canaries have been bred in captivity in the 16th century (although some sources list the 15th or the 17th century). They were imported into Europe by Spanish sailors, where they were placed into breeding programs by Monks, who only sold the males only, as they were in demand for their attractive songs, and they kept the females for breeding.

The demand for these birds was greater than what was available, which drove the price for these birds up and only the wealthy could afford them. Eventually Italians obtained some of these birds for breeding, and as their popularity and availability increased, these birds were bred all over Europe.

Canary breeders over time developed many different varieties / breeds to alter their appearance or enhance certain qualities (such as song) through selective breeding methods.

The life expectancy of a canary is between 10 to 15 years, depending on its genetic make-up and, most importantly, the quality of its diet.