The avian disease Trichomoniasis is also commonly referred to as “pigeon canker” or simply “canker”or “roup,” and, in hawks, it is known as “frounce.” The organism “Trichomonas gallinae” lives in the sinuses, mouth, throat, esophagus and other organs. 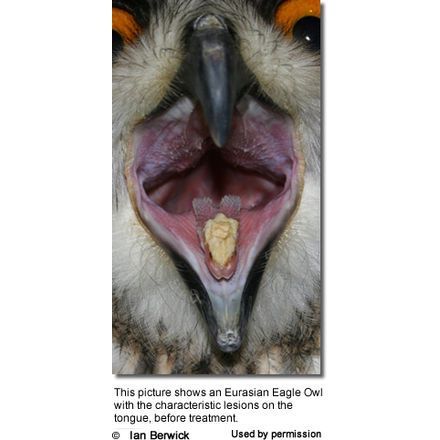 The avian disease Trichomoniasis is also commonly referred to as “pigeon canker” or simply “canker”or “roup,” and, in hawks, it is known as “frounce.”

The organism “Trichomonas gallinae” lives in the sinuses, mouth, throat, esophagus and other organs. This disease occurs worldwide in warm climates or during warm weather. In captivity, they may occur at any time of the year.

Please note: The images on this page of the infected eagle owl before and after treatment are courtesy of Ian Berwick. 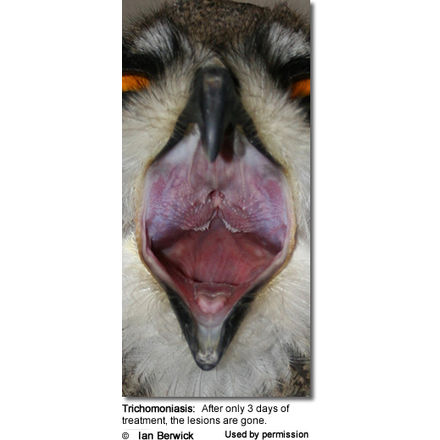 Diagnosis should be confirmed by microscopic examination of a smear of mucus or fluid from the throat to demonstrate the presence of trichomonads. Trichomonads can be cultured easily in various artificial media such as 0.2% Loeffler’s dried blood serum in Ringer’s solution or a 2% solution of pigeon serum in isotonic salt solution. Good growth is obtained at 98.6°F (37°C). Antibiotics may be used to reduce bacterial contamination.

Large number of dead birds appear to literally “fall out of the sky,” with no apparent signs of trauma on their bodies. After some investigation by wildlife experts, the culprit appears to be a little-known bird disease called canker.

“Whenever there is a concentrated population of wildlife, disease soon follows.” Williams said.

Trichomoniasis, more commonly known as “pigeon canker,” affects approximately 80 percent of the pigeon population, Williams said. Canker is microscopic and can lie dormant in adult birds until some moment of stress triggers the outbreak. Once triggered, however, death becomes imminent.

The birds will develop yellow, cheese-like lesions in their throats and will exhibit signs of “panting,” with their mouths open. They may be lethargic and slow to fly away as healthy birds would do when startled. Eventually, the birds will either starve to death or asphyxiate because of the swollen lesions in their esophagus.

Williams said there is a large breakout of canker in the San Bernardino Mountains. Since the disease can not be cured and is highly transferable, it is almost impossible to control.

Well-meaning residents are unknowingly helping to keep the disease in motion, Williams said. The higher the concentration of infected birds at a feeding station, the greater the chance that the disease can be transferred, she said. Since canker is transferred through the mouth and feces, ill birds can pass the disease to other birds through contact with the seeds in a common bird feeder, since the sick birds cannot swallow and spit the germ-infested seeds back into the feeder.

The young of infected birds also contract the disease. As a method of feeding their young, birds regurgitate fat-laden cells that have been sloughed off the inner lining of their throat and into the oral cavities of their babies, transferring the disease. Wildlife specialists are asking the community for help in controlling the canker outbreak. Residents are being reminded to refrain from feeding local wild birds.

There are a few things residents can do to help if there has been a high number of dead birds found near their bird feeders. Wildlife experts at Wildhaven Ranch recommend that the food source be removed for at least a month and that feeding areas be thoroughly disinfected.

This disease could affect carrion bird populations eventually, as they could become infected through eating the carcasses of diseased birds, Williams said. Canker, and diseases similar to it, could eventually throw off the ecological balance of the mountains. Seed eaters are the first to be affected, and will transfer the disease to those animals that consider small birds to be prey. It is unknown at this time whether the disease can cross species to such animals as coyotes and raccoons, or how far up the food chain it might eventually move.

Q. What should I do if I find a dead bird?
A. Check with with your local or state health department for instructions on reporting and diposing of a dead bird. If you need to pick up a dead bird, or local authorities tell you to simply dispose of it: Avoid bare-handed contact with any dead animals, and use gloves or an inverted plastic bag to place the bird carcass in a garbage bag and dispose of it with your routine trash.

Q. Why do some areas stop collecting dead birds?
A. Some states and jurisdictions are no longer collecting dead birds because they have sufficiently established that the virus is in an area, and additional testing will not reveal any more information. Shifting resources away from testing of dead birds allows those resources to be devoted elsewhere in surveillance and control.