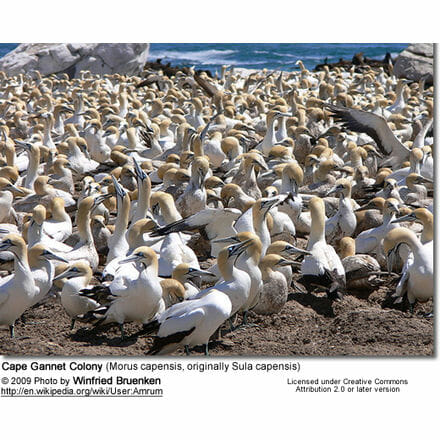 They are easily identified by their large size, black and white plumage and distinctive yellow crown and hindneck. The pale blue bill is pointed with fine serrations near the tip; perhaps because of the depth and speed of the gannet’s dive when fishing (depending on altitude, gannets hit the water at speeds of between 40 and 120 kilometers per hour[1]), its beak has no external nostrils into which the water might be forced.

When seen in flight the snow-white body with the black tail, primaries (longest wing feathers) and secondaries (shorter, upper “arm” feathers), and dark bill makes then easy to identify. At closer range the distinctive golden crown and nape, which gradually become white on the neck, are noticeable. On the other hand, the dark brown juveniles look completely black when seen in flight. Adults are about 84-94 cm (33-37 in) long and have a 171-185 cm (68-73 in) wingspan and weigh ca. 2600 g (5.7 lbs).

Cape Gannets begin breeding in August or September. Typically the clutch is a single bluish egg, which soon becomes soiled. Both parents are actively involved in the incubation process which lasts for 42 to 46 days until hatching. Gannets use their foot webs to incubate the egg. The foot webs, which are richly irrigated with blood vessels are wrapped around the egg.

The hatchling is black, naked and blind, it weighs only about 70 grams, but within three weeks its body mass is one third of that of an adult. At eight weeks the chick outweighs the adult, and this remains so until it becomes a fledgling at 95-105 days of age.

Cape Gannets are powerful fliers, using mainly a flap-gliding technique, which is more energy consuming than the dynamic-soaring favoured by albatrosses. As all Sulids, they are fish-eating birds that plunge-dive from considerable height.

The breeding range of Cape Gannet is restricted to southern Africa in three islands off Namibia and three islands off South Africa. They normally nest in large and dense colonies on flat islands or on flat ledges of the steeply sloping Mercury Island off Namibia. The world population was estimated in 1996 to number about 340,000 birds, with 12% in Namibia and 88% in South Africa. The largest colony of this bird, with over 140,000 birds, is found on Malgas Island, South Africa. Several birds have occasionally been found breeding on offshore Australian islands, together with Australasian Gannets, although the Cape species is never represented by more than a few pairs.

The non-breeding range of Cape gannets extends from the coastal waters off the Gulf of Guinea on the west coast of Africa, to Mozambique on the east coast. They seldom occur farther offshore than 100 km, though records of birds more than 200 km offshore exist for both the Atlantic and Indian Oceans.

Numbers of Cape Gannets at the Namibian islands have declined considerably between 1956 and 2000 from 114,600 to 18,200 breeding pairs respectively, an 84% decrease in less than fifty years. This contrasts with the trends at the South African islands where numbers have increased about 4.3 times during the same period, from 34,400 to 148,000 breeding pairs.

Vagrancy to the northern Atlantic Ocean has been reported for the Cape Gannet on several occasions, but is currently believed to be unproven. Crochet and Haas (2008)[3] examined the status of the species in the western Palearctic region. They list a number of historical claims which had not been accepted by national bird records committees, and analyse the single record which had hitherto been widely accepted, a juvenile recovered offshore from Western Sahara in 1966. In relation to the latter bird, they conclude that a mistake had occurred; the original data placed the bird inland, in Chad, with the offshore Western Saharan location being the result of an attempt to correct this to a more plausible location. A (re-)transposition of the original latitude and longitude gives a location off the Namibian coast, well within the regular wintering range of the species. As a result, they recommend that Cape Gannet be deleted from the Western Palearctic list.