The Cape Petrel, Daption capense, also called Cape Pigeon or Pintado Petrel, is a common seabird of the Southern Ocean from the family Procellariidae. It is the only member of the genus Daption, and is allied to the fulmarine petrels, and the Giant Petrels. 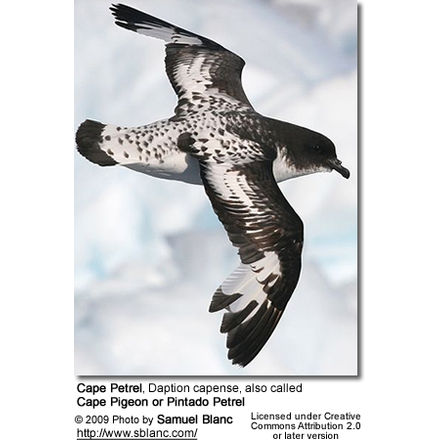 The Cape Petrel, Daption capense, also called Cape Pigeon or Pintado Petrel, is a common seabird of the Southern Ocean from the family Procellariidae.

It is the only member of the genus Daption, and is allied to the fulmarine petrels, and the Giant Petrels. It is also sometimes known as the Cape Fulmar.

They are extremely common seabirds with an estimated population of around 2 million birds.

The Cape Petrel has two subspecies 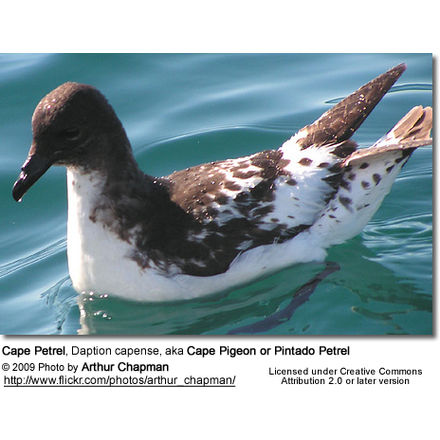 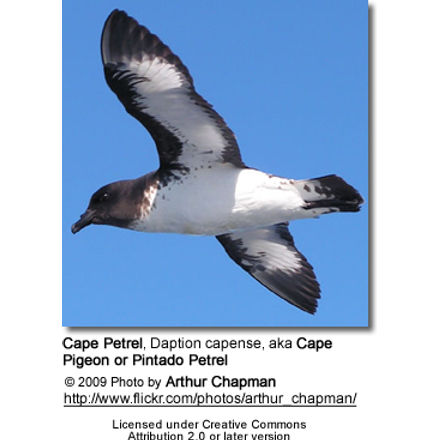 The Cape Petrel is a unique looking Petrel. It has a black head and neck, and a white belly, breast, and its underwing is white with a black border. Its back, and upperwings are black and white speckled, as is its tail which also has a band of black.

When flying, it alternates between some rapid wingbeats followed by a stiff-winged glide.

Cape Petrels’ diet was 80% crustaceans, as well as fish and squid. krill was their favorite crustacean, which they would obtain by surface seizing as well as diving under water and filtering them out. They are also known for following ships and eating edible waste thrown overboard and carcasses. They are aggressive while feeding and will spit their stomach oil at competitors, even their own species. 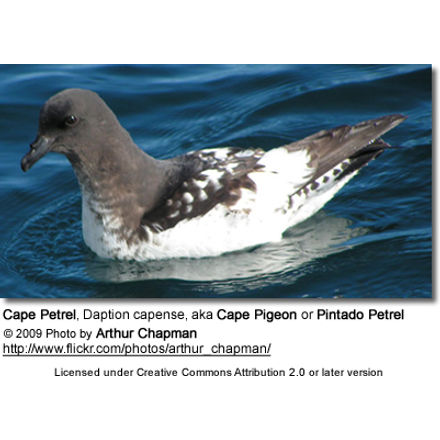 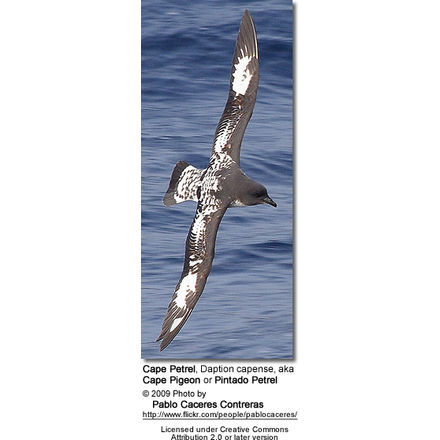 They are colonial birds, and will nest on cliffs or level ground within a kilometer of the ocean. They tend to have smaller colonies than other Petrels.

Their nests are formed with pebbles and are placed under overhanging rock for protection, or in a crevice. In November they lay a single egg, which is incubated for 45 days by both sexes.

Like most other Fulmars, they will defend their nest by spitting their stomach oil. Skuas in particular will prey on Cape Petrel eggs and chicks. Upon hatching, the chick is brooded for ten days until it can thermoregulate. After which both parents assist in the feeding. The chicks fledge after 45 more days, around March.

During breeding season, Cape Petrels feed around Antarctica’s shelf and during the winter they range further north, as far as Angola and the Galapagos Islands.

They breed on many islands of Antarctica and the sub-Antarctic islands, some going as far as the Auckland Islands, the Chatham Islands, Campbell Island, New Zealand. Their main breeding grounds were on the Antarctic Peninsula, South Georgia, the Balleny Islands, the Kerguelen Islands, as well as islands in the Scotia Sea.

The Cape Petrel is the only known member of the genus Daption and are in turn a member of the Procellariidae family and Procellariiformes order. There appears to be a sub-group within the family consisting of the Giant Petrels, the members of Fulmarus, the Antarctic Petrel, and the Snow Petrel.

All Procellariiformes share certain identifying features. First, they have nasal passages that attach to the upper bill called naricorns. Although the nostrils on the Albatross are on the sides of the bill. The bills of Procellariiformes are also unique in that they are split into between 7 and 9 horny plates. They produce a stomach oil made up of wax esters and triglycerides that is stored in the proventriculus (stomach). This is used against predators as well as an energy rich food source for chicks and for the adults during their long flights. Finally, they also have a salt gland that is situated above the nasal passage and helps desalinate their bodies, due to the high amount of ocean water that they imbibe. It excretes a high saline solution from their nose.

Daption is derived from Ancient Greek for little devourer, and the Cape name is because of where the type specimen was collected. Finally, Pintado is Spanish for painted for its plumage. One of their other names, Cape Pigeon, is from their habit of pecking at the water for food. The word Petrel is derived from St. Peter and the story of his walking on water. This is in reference to the Petrels habit of appearing to run on the water to take off.http://tolweb.org/Procellariidae/26384. Retrieved 18 Mar 2009.