The cassowaries (genus Casuarius) are a very large flightless bird native to the tropical forests of New Guinea and nearby islands, and north eastern Australia. 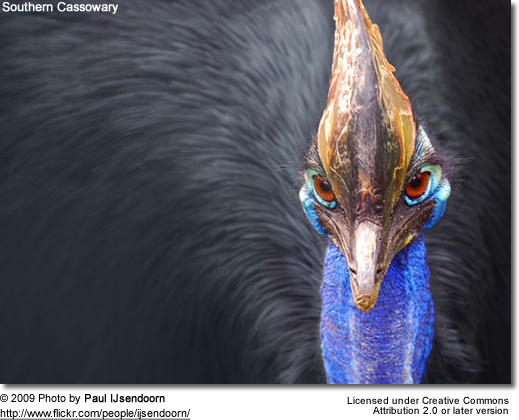 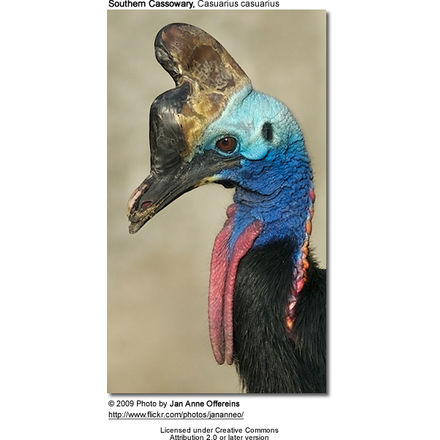 The cassowary (genus Casuarius) is a very large flightless bird native to the tropical forests of New Guinea and nearby islands, and northeastern Australia.

The Southern Cassowary is the third tallest and second heaviest living bird, smaller only than the Ostrich and Emu.

Cassowaries feed mainly on fruits, though all species are truly omnivorous and will take a range of other plant food including shoots, grass seeds and fungi in addition to invertebrates (= animals without internal skeleton, such as insects, larvae, earthworms, millipedes, snails, spiders) and small vertebrates.

Cassowaries are very shy, but when disturbed, they are capable of inflicting fatal injuries to dogs and children.

Cassowaries (from the Malay name kesuari) are part of the ratite group, which also includes the Emu, rheas, ostrichs, and kiwis, and the extinct moas and elephant birds. There are three extant species recognized today and one extinct: 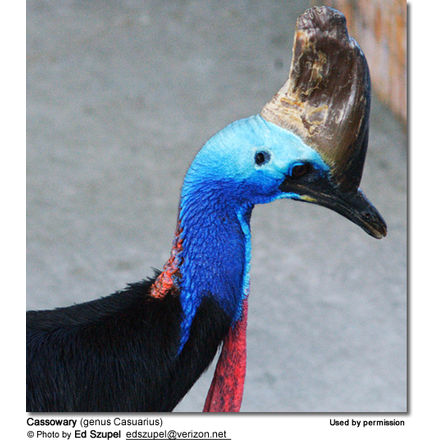 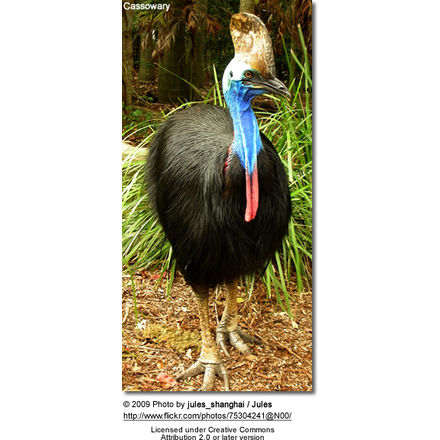 Presently, most authorities consider the above monotypic, but several subspecies have been described of each (some have even been suggested as separate species, e.g., C. (b) papuanus). It has proven very difficult to confirm the validity of these due to individual variations, age-related variations, the relatively few available specimens (and the bright skin of the head and neck–the basis of which several subspecies have been described–fades in specimens), and that locals are known to have traded live cassowaries for hundreds, if not thousands, of years, some of which are likely to have escaped or deliberately introduced to regions away from their origin.

The evolutionary history of cassowaries, as of all ratites, is not well known. A fossil species was reported from Australia, but for reasons of biogeography this assignment is not certain and it might belong to the prehistoric “emuwaries”, Emuarius, which were cassowary-like primitive emus.

The Northern and Dwarf Cassowaries are not well known. All cassowaries are usually shy birds of the deep forest, adept at disappearing long before a human knows they are there. Even the more accessible Southern Cassowary of the far north Queensland rain forests is not well understood.

All cassowaries have feathers that consist of a shaft and loose barbules. They do not have retrices (tail feathers) or a preen gland. Cassowaries have small wings with 5-6 large remeges. These are reduced to stiff, keratinous quills, like porcupine quills, with no barbs. A claw is on each second finger. The furcula and coracoid are degenerate, and their palatal bones and sphenoid bones touch each other. A cassowary’s three-toed feet have sharp claws. The second toe, the inner one in the medial position, sports a dagger-like claw that is 125 millimetres (4.9 in) long. This claw is particularly fearsome since cassowaries sometimes kick humans and animals with their enormously powerful legs (see Cassowary Attacks, below). Cassowaries can run up to 50 km/h (31 mph) through the dense forest. They can jump up to 1.5 metres (4.9 ft) and they are good swimmers, crossing wide rivers and swimming in the sea as well. 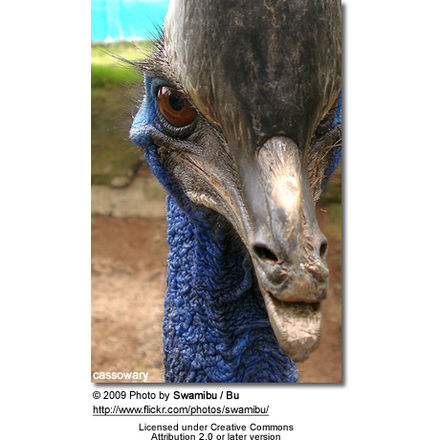 All three species have horn-like crests called casques on their heads, up to 18 cm (7.1 in). These consist of “a keratinous skin over a core of firm, cellular foam-like material”. Several purposes for the casques have been proposed. One possibility is that they are secondary sexual characteristics. Other suggestions include that they are used to batter through underbrush, as a weapon for dominance disputes, or as a tool for pushing aside leaf litter during foraging. The latter three are disputed by biologist Andrew Mack, whose personal observation suggests that the casque amplifies deep sounds. However, the earlier article by Crome and Moore says that the birds do lower their heads when they are running “full tilt through the vegetation, brushing saplings aside and occasionally careening into small trees. The casque would help protect the skull from such collisions.” Mack and Jones also speculate that the casques play a role in either sound reception or acoustic communication. This is related to their discovery that at least the Dwarf Cassowary and Southern Cassowary produce very-low frequency sounds, which may aid in communication in dense rainforest. This “boom” is the lowest known bird call, and is on the edge of human hearing.

Cassowaries are solitary birds except during courtship, egg-laying, and sometimes around ample food supplies.

Females lay three to eight large, pale green-blue eggs in each clutch into a prepared heap of leaf litter. These eggs measure about 9 by 14 centimetres (3.5 in × 5.5 in) — only Ostrich and Emu eggs are larger. The female does not care for the eggs or the chicks; the male incubates the eggs for 50-52 days, removing or adding litter to regulate the temperature, then protects the brown-striped chicks for nine months, defending them fiercely against all potential predators, including humans. 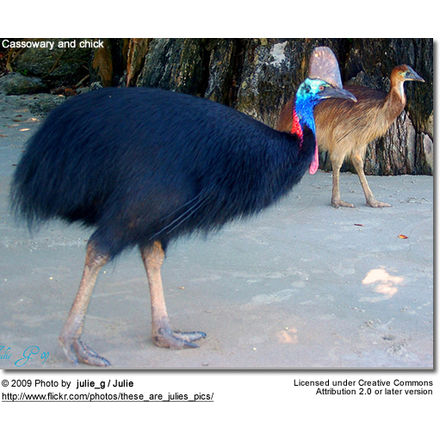 Cassowaries are predominantly frugivorous, but they will take flowers, fungi, snails, insects, frogs, birds, fish, rats, mice, and carrion. Fruit from at least twenty-six plant families have been documented in the diet of cassowaries. Fruits from the laurel, podocarp, palm, wild grape, nightshade, and myrtle families are important items in the diet. The cassowary plum takes its name from the bird.

Where trees are dropping fruit, cassowaries will come in and feed, with each bird defending a tree from others for a few days. They move on when the fruit is depleted. Fruit is swallowed whole, even items as large as bananas and apples.

Cassowaries are a keystone species of rain forests because they eat fallen fruit whole and distribute seeds across the jungle floor via excrement. 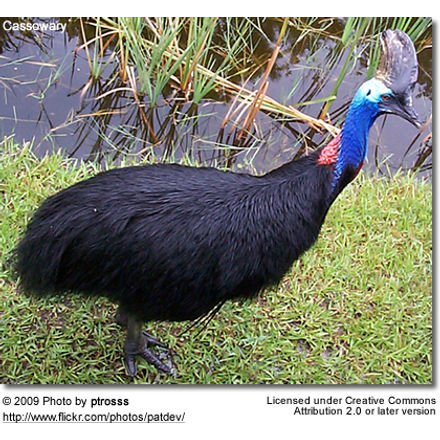 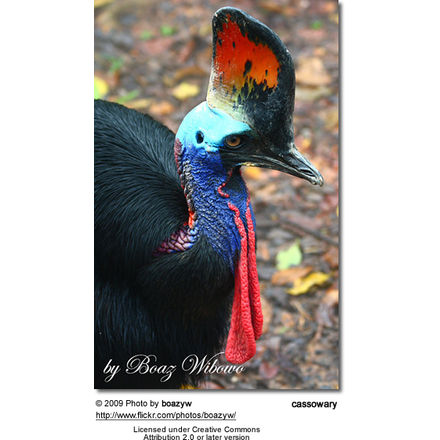 Cassowaries are native to the humid rain forests of New Guinea and nearby smaller islands, and northeastern Australia. They will, however, venture out into palm scrub, grassland, savanna, and swamp forest. It is unclear if some islands populations are natural or the result of trade in young birds by natives.

The Southern Cassowary is endangered in Queensland, Australia. Kofron and Chapman (2006) assessed the decline of this species. They found that, of the former cassowary habitat, only 20 – 25% remains. They stated that habitat loss and fragmentation is the primary cause of decline. They then studied 140 cases of cassowary mortality and found that motor vehicle strikes accounted for 55% of them, and dog attacks produced another 18%. Remaining causes of death included hunting (5 cases), entanglement in wire (1 case), the removal of cassowaries that attacked humans (4 cases), and natural causes (18 cases), including tuberculosis (4 cases). 15 cases were for unknown reasons.

Hand feeding of cassowaries poses a big threat to their survival. In suburban areas the birds are more susceptible to vehicles and dogs. Contact with humans encourages Cassowaries to take most unsuitable food from picnic tables.

Feral pigs are a huge problem. They destroy nests and eggs but their worst effect is as competitors for food, which could be catastrophic for the Cassowaries during lean times. 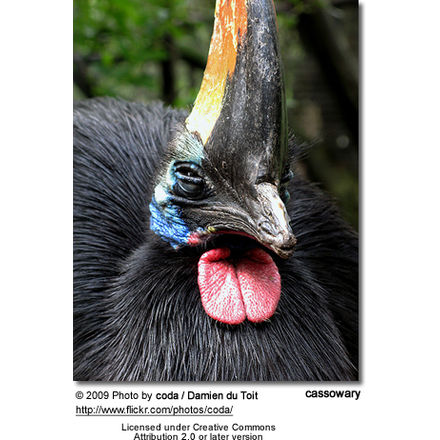 Cassowaries have a reputation for being dangerous to people and domestic animals. The 2007 edition of the Guinness World Records lists the cassowary as the world’s most dangerous bird. During World War II American and Australian troops stationed in New Guinea were warned to steer clear of them. Many internet entries about cassowaries state that they can disembowel a man or dog with one kick, with the long second toe claw cutting the gut open.

In his book “Living Birds of the World” from 1958, Ornithologist Thomas E. Gilliard wrote;

“The inner or second of the three toes is fitted with a long, straight, murderous nail which can sever an arm or eviscerate an abdomen with ease. There are many records of natives being killed by this bird.”

However, Gilliard did not include any such records or any references for them, and although this assessment of the danger posed by cassowaries has been repeated in print by authors including Gregory S. Paul (1988) and Jared Diamond (1997), recent research on hundreds of cassowary attacks has only been able to find one human death. A 2003 study of attacks by the Southern Cassowary in Queensland found no wounds larger than punctures about 1.5 centimeters in diameter. Of 221 attacks studied, 150 were against humans. 75% of these were from cassowaries that had been fed by people. 71% of the time the bird chased or charged the victim. 15% of the time they kicked. Of the attacks, 73% involved the birds expecting or snatching food, 5% involved defending natural food sources, 15% involved defending themselves from attack, 7% involved defending their chicks or eggs. Of all 150 attacks there was only one human death. 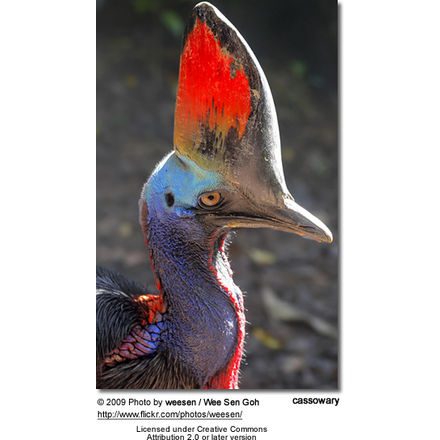 The one documented human death caused by a cassowary was that of Phillip Mclean, aged 16 years old, and it happened on 6 April 1926. He and his brother, aged 13, were attempting to beat the cassowary to death with clubs. They were accompanied by their dog. The bird kicked the younger boy, who fell and ran away. Then the older boy struck the bird. The bird charged and knocked the older boy to the ground. While on the ground, Phillip was kicked in the neck, opening a 1.25 centimeter wound. Phillip got up and ran but died shortly afterwards from the hemorrhaging blood vessel in his neck.

Cassowary strikes to the abdomen are among the rarest of all, but there is one case of a dog that was kicked in the belly in 1995. The blow left no puncture, but there was severe bruising. The dog later died from an apparent intestinal rupture.

Role in seed dispersal and germination

Cassowaries feed on the fruits of several hundred rain forest species and usually pass viable seeds in large dense scats. They are known to disperse seeds over distances greater than a kilometer, and thus probably play an important role in the ecosystem. Germination rates for seeds of the rare Australian rain forest tree Ryparosa were found to be much higher after passing through a cassowary’s gut (92% versus 4%). 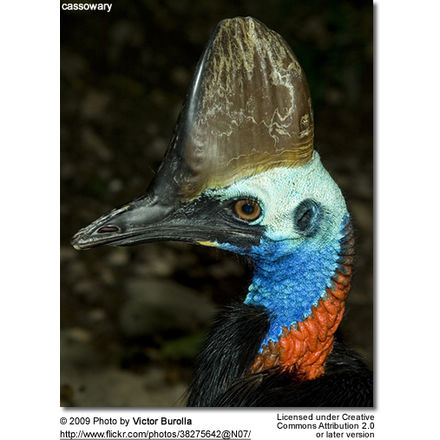 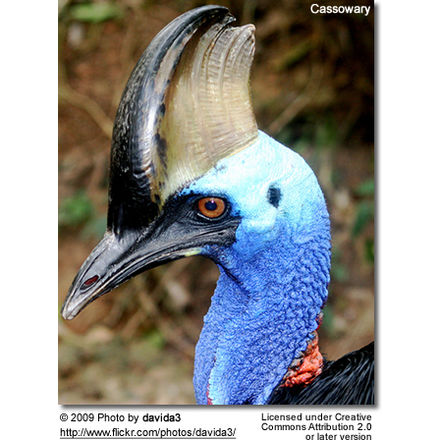 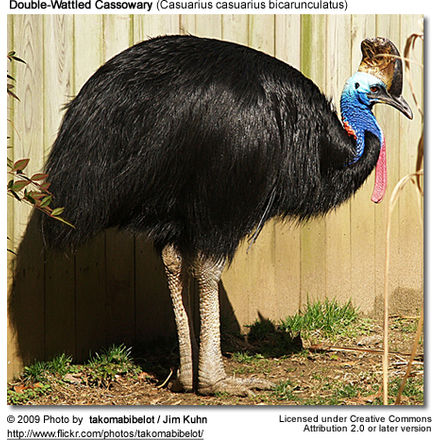