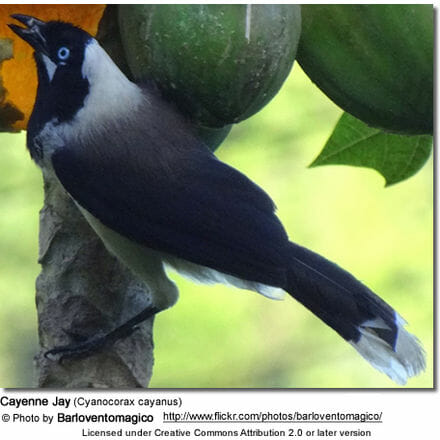 The natural range of the Cayenne Jays stretches from southeastern Venezuela (northern and eastern parts of the state of Bolívar and the southern regions of the state of Delta Amacuro), east to Guyana, the French Guiana, Suriname and south into northern Brazil, from the northernmost Brazilian state of Roraima south through the state of Amazonas to the city of Manaus near the lower Rio Negro river, and east through northern Pará to northern Amapá). Only few records exist from Brazil, where they are very rare.

They are mostly found in humid lowland forests (in Venezuela up to an elevation of 3,600 feet / 1,100 meters), along the forest edges, heavily degraded former forests, wooded savannas, sandy soil regions and dry shrubland. They are absent from continuous forests.

The plumage is for the most part black, blue and white.

Black: short frontal crest, forehead, the sides of the head, the throat and the chest.

White / creamy white / bluish white: the rear crown and nape (back of the neck), lower chest, abdomen and thighs. Tail is broadly tipped white. There is a small bluish white or white spot above and below the eye. The malar (cheek) stripe is whitish.

Bluish-purple: Tail (except for the white tips) and wings.

Brownish purple: Back and “shoulders” (scapulars).

The eyes (irises) are white.

The bill is black.

Immature birds have a duller plumage. The white band at the tip of the tail is suffused with violet-yellowish-tan, particularly the central, long flight feathers of the tail (rectrices). The spots above and below the eyes are either smaller or entirely absent. If present, these spots as well as the malar (“cheek”) stripes are more bluish than those of the adults.

Cayenne Jays feed on various insects (such as beetles and locusts), fruit and berries.

In Venezuela, most breeding activities were observed between January and April, and in Suriname nests were found in May.

The Cayenne Jays are described as communal / cooperative breeders that are usually found in family groups with at least three adult birds feeding the nestlings. The members of these small (family) groups have also been observed in mutual preening and they participate in mobbing predators in the vicinity of the nest.

The unlined, cup-shaped nests are constructed out of twigs and placed in the crown of tall trees.