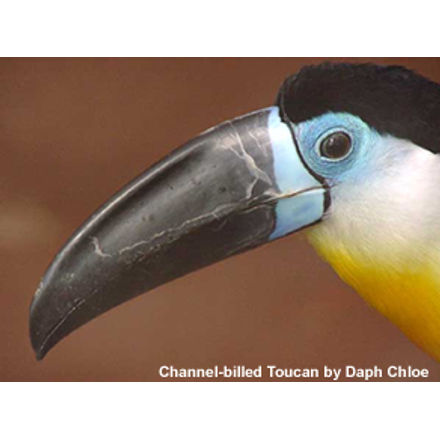 The Channel-billed Toucan (Ramphastos vitellinus) is a toucan that occurs on the island of Trinidad and in tropical South America, in the southeastern Amazon, as far south as southern Brazil and central Bolivia.

They occur in the forest and woodland areas, with a preference for humid regions. Locally, they extend into drier regions, particularly along water ways.

Unlike the popular parrots, captive toucans cannot learn to talk. On the bright side, they are also much quieter. Generally, they are friendly and easily tamed.

After 16 days the nestlings are born blind, with no trace of down on their pink skin. The bill is unremarkable until about 16 days old when it takes on the distinguishing features of the toucan, and requires up to four months to develop fully. Feathers begin to expand at 4 weeks.