Nancy Bowes shares her story with her pet Blue-crowned Conure with our visitors:

“I have a 26 year old Blue Crown Conure named Charlie that I rescued after hearing about his situation through a family member acquainted with his former owner.

Charlie was locked in a small cage for his whole life, and suffered extreme neglect. Charlie is also an avian veterinary miracle according to all the avian vets in Massachusetts; he suffers from spondylosis (no one has ever seen this in a bird before), stenosis, and as a result of being locked in a cage for so many years, suffered severe muscle atrophy which resulted in him eventually falling and breaking his back in the lower lumbar area. 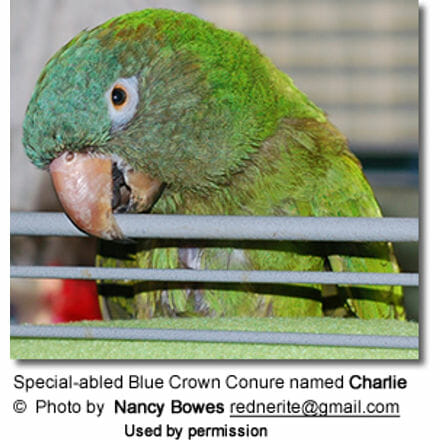 Despite this, Charlie lived, and this is when I heard about him – after he fell. I took him to the vets at Angell Memorial in Boston, and they were able to save him. He now lives as a paralyzed bird; he has no use of either feet or legs and therefore can no longer perch.

He has been slowly nursed back to health with proper supplements and diet, but will never regain use of his legs or feet. He is the most spirited animal that I have ever known, and has such a zest for life despite his handicap. And amazingly, he has learned to trust and enjoy people again! He is very bonded to both me and my fiance.”

“Because Charlie has no use of his feet or legs, he lives leaning on his keelbone. There was concern that his keelbone would puncture through the skin; and in the beginning this did happen, but fortunately it healed beautifully and has not occurred since.

Charlie is kept in a regular bird cage that is extra wide on the bottom for room to move around. The bottom is lined with towels for padding, and on top of that I use non-pilling fleece which you can buy at local arts and crafts stores. This is a soft lining that does not irritate his skin, and helps reduce the risk of bedsores. Charlie is able to get around by gathering up the fleece in his beak to pull himself forward, and by using the bars of the cage.

Charlie also has a medical grade sheepskin rug, commonly used for people who are paralyzed to reduce the risk of bedsores. It is easy to clean and very soft.

Inside the cage, the water and food bowls are set up low, so they are level with the bedding; all Charlie needs to do is reach down into his water bowl and food bowl. He also has a flat dish for treats which he happily tosses around like a frisbee after he’s done eating!

As for cleaning, I have to spot clean his fleece two times per day, and despite this Charlie does sometimes end up dragging himself through his messes, but I remedy this by giving him a daily “sponge bath” at the sink. I use cotton balls soaked with tepid water and some of the Avix Soother Spray to help reduce any irritations.

Charlie does still have the use of his wings; however he cannot land properly, he “crash lands” on his chest, therefore I keep him in safe situations so he does not get spooked and take off flying when he is out. The occasions when he has taken off flying, I reach out with my hands and he circles around to me and lands safely in my palm. I do allow him to exercise his wings by holding him securely and dropping my hand through the air. Charlie also holds on to the lower bars of his cage with his beak and flaps his wings.

He was an unsociable bird when I first got him due to his years of neglect and being ignored, but he quickly warmed up to me once he realized that he needed me to help him. I did wear a glove in the beginning when he was in pain and unsociable to protect myself from any bites, but he is now a complete cuddle-bug! He loves having his ears and head scratched, and always wants to be taken out to rest on our stomachs or chests and cuddle. He hangs out with us whenever we are home, either on my bed with his sheepskin rug or in a sling I made that I wear around my neck; this keeps my hands free while still being able to have Charlie with me as I go about the house, just like birds who are able to perch ride around on their owner’s shoulders while they go about their business.

Charlie has been an inspiration to me, and I can not recommend enough the importance of taking a bird to a certified avian vet or one with extensive bird experience to give the bird the best chance possible to make it through any traumas they may suffer such as Charlie has.

Because Charlie had “nothing to lose” at the point when I rescued him, we chose to give him a chance. Charlie also made it very clear that he wanted to live; he was not in shock after his accident, just clearly in poor shape and not feeling well. The proper veterinary care and home care enabled Charlie to get healthy and continue living a fulfilling life despite the paralysis!”