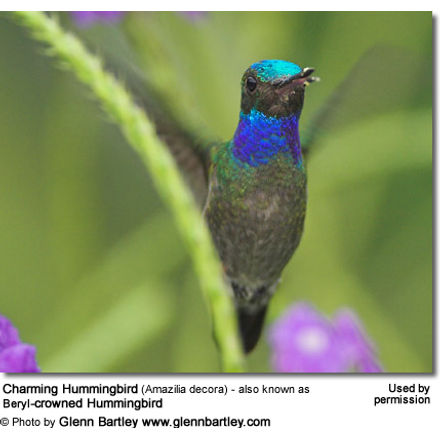 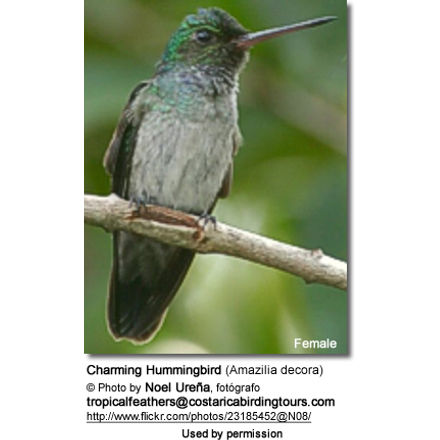 Some authorities consider it conspecific (one same species) with the Blue-chested Hummingbird found on the Caribbean slope as they look very much alike.

They occur naturally in the Southern Pacific lowlands and coastal areas of Costa Rica north to Carara and Panama. They inhabit coffee plantations, gardens, forest edges and can also be found along streams and in open clearings.

Charming Hummingbirds will breed throughout most of the year except the height of the dry season. Up to 12 males will perform at “leks”(communal courtship dance) – during which they dance to attract females

The female alone constructs the cup-shaped nest out of plant fibers that she weaves together and places green moss on the outside for camouflage. The nest is placed in a protected location, in a shrub, bush or tree, typically on a low, thin horizontal branch.. The nest is lined with soft plant fibers, animal hair and feather down. The nest structure is strengthened with spider webbing and other sticky material, which give the nest an elastic quality allowing it to stretch to double its size as the chicks grow and need more room.

The average clutch consists of two white eggs, which are incubated by the female alone. The hatchlings are initially blind, immobile and without any down.

The Charming Hummingbirds primarily feed on nectar taken from a variety of brightly colored, scented small flowers of trees, herbs, shrubs and epiphytes, specifically favoring the flowers of the Inga, Hamelia, Satryia and Heliconia plants. They use their long, extendible, straw-like tongues to retrieve the nectar while hovering with their tails cocked upward as they are licking at the nectar up to 13 times per second. Sometimes they may be seen hanging on the flower while feeding.