Its primary name (Cheer) is derived from the Chir pine tree which can be found within their breeding territories and serves as a preferred roosting place at night.

This rare pheasant is found in the highlands and scrublands of the western Himalayas, from northern Pakistan through Kashmir into Himachal Pradesh, Uttar Pradesh, India and east to central Nepal (Garson et al, 1992) at elevations from 5,000 to 9,000 ft (~ 1,500 to 2,700 m). It prefers steep, craggy hillsides with scrub and secondary growth.

Its distribution is patchy due to its specialized habitat requirements and numbers are declining. In India most known populations are now being confined to Himachal Pradesh.

In Pakistan, small populations may only be found in 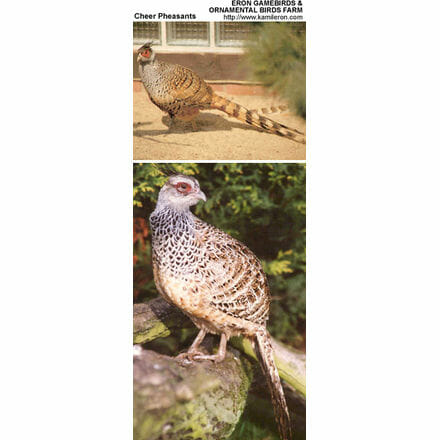 Jhelum Valley. Since then, the Margalla Hills National Park has been established to provide a sanctuary to these pheasants.

‘The Cheer Pheasant is an endangered species and is, as such, listed in CITES Appendix I and on IUCN Red Data Book. Habitat loss, illegal hunting for its beautiful feathers and meat, and trade has taken its toll on this rare species of pheasant.

The male has more defined and strong markings than the female, with pronounced barring on mantle, unmarked neck and broader barring across tail.

Distinguishing features are the rather pale neck and underpants with dark scaling / mottling rufous-buff to its buffish-washed rump, belly and vent, and the long, straight barred tail.

Their calls are very loud and carry for miles and consists of a series of harsh grating notes – chir-a-pir chir-a-pir chir chir-chirwa chirwa and high, piercing chewewoo notes, interspersed with short chut and harsh staccato notes.

Cheer pheasants are very vocal and their calls can carry for over a mile. Its life expectancy is about 4 to 6 years. These pheasants are strong diggers and will soon turn over all the soil in the aviary foraging for food.

They are best kept in large grass or sand-based aviaries of the following minimum dimensions: ~ 60 sq.ft (18 m2).

This pheasant starts breeding the first year. In North America, the breeding season usually begins mid-April. The female lays 18 to 24 eggs a season. Each clutch is incubated for about 26 days. Both parent birds help in raising the young.