The Chestnut-eared Aracari (Pteroglossus castanotis) is an Aracari that is native to central and south-eastern South America, where this lowland species inhabits western Brazil north to eastern Colombia and south through eastern Peru, northern and eastern Bolivia and northern Argentina.

It has the widest distribution of any aracari species and is one of the most common toucan species.

The Chestnut-eared Aracari has yellow underparts, with a single red band across the chest. The head is black; the throat, ear coverts (feathers covering the ears) and collar are chestnut brown but appearing black at a distance. It has a red rump.

The bill is mostly dark-brown or black with a yellow tip and stripe along the bottom of the upper bill. The irises are white or yellow. The bare skin around the eyes varies from dark turquoise to grey. 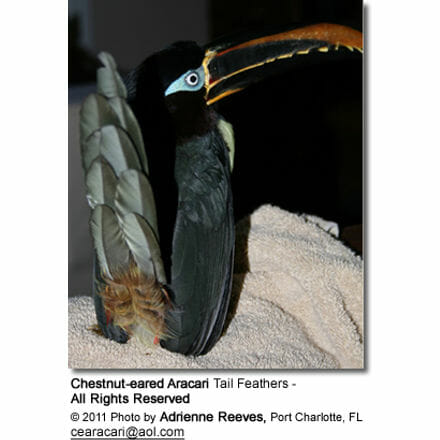 They typically nest in trees with appropriate hollows, most of which are previously made by woodpeckers. Other hollows are the result of a branch break and ensuing rotting of the heart wood from rain over a period of time.

Their eggs are white and elliptical shaped. The eggs are incubated for about 16 days. The newly hatched chicks are blind and naked with short bills and thick pads on their heels to protect them from the rough floor of the nest. Both parents, as well as their previous offspring and/or possibly other adults, feed the chicks.

In captivity, their nests are typically constructed from palm tree logs or nesting boxes..