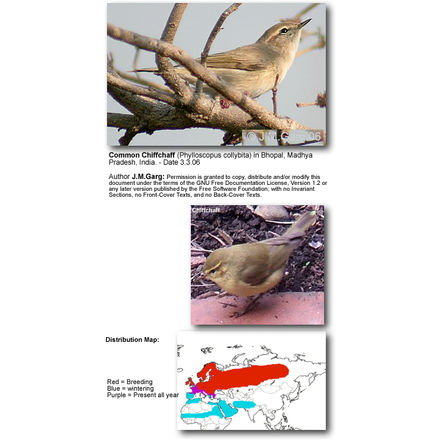 The Chiffchaff, Phylloscopus collybita, is a common and widespread leaf warbler which breeds throughout northern and temperate Europe and Asia. It is probably the best-known of all Old World warblers.

This warbler is less strongly migratory and hardier than most leaf warblers; northern breeders winter in southern and western Europe (north to Britain), southern Asia and north Africa. Along with the Sand Martin, it is the first passerine to return in the spring, and one of the last to leave in late autumn.

The Chiffchaff is a bird of open woodlands with some taller trees and ground cover for nesting. Its habitat is quite specific, and even its near relatives do not share it. The Willow Warbler prefers younger trees, and the Wood Warbler less undergrowth.

The Chiffchaff’s nest is built in low shrub, and the four to seven eggs are incubated by the female for 13-14 days to hatching, with another 14-15 days until the chicks fledge. The male is inquisitive and fearless, attacking dangerous predators like the Stoat if they approach the nest.

Like most Old World warblers, this small species is insectivorous, moving restlessly though foliage or briefly hovering.

This is a typical leaf warbler in appearance, 10-12 cm long, greenish brown above and off-white below. It is very similar to the Willow Warbler, Phylloscopus trochilus, but non-singing birds can be distinguished from that species by their dark legs, fine dark bill, dumpy shape and short primary projection. They also dip their tail much more often.

This warbler gets its name from its simple song, a repetitive cheerful “chiff-chaff”. This song is one of the first avian signs that spring has returned.

Three very similar species have recently been split from Phylloscopus collybita. This is on the basis of DNA differences and reproductive isolation.