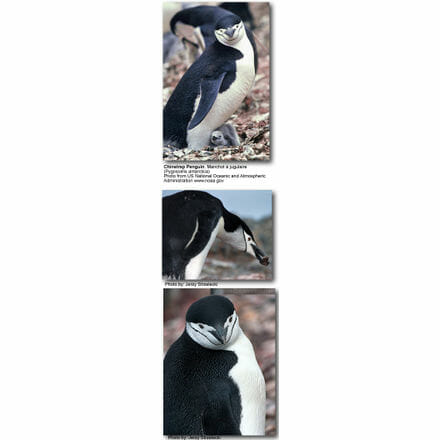 The Chinstrap Penguin (Pygoscelis antarcticus) is a species of penguin which is found in the South Sandwich Islands, Antarctica, the South Orkneys, South Shetland, South Georgia, Bouvet Island, Balleny and Peter I Island.

Their name derives from the narrow black band under their heads which makes it appear as if they are wearing black helmets, making them one of the most easily identified types of penguin.

The diet of the Chinstrap consists of: small shoaling animals, krill (a shrimp-like sea creature), small fish and other roaming marine crustaceans.

They are considered near-shore feeders foraging among the pack ice, although vagrants may occasionally be seen in the open sea. They feed by pursuit-diving for prey close to their breeding colonies. Diving effort is usually concentrated near midnight and noon and dives typically last less than a minute and are seldom more than 200 feet deep.

Like most penguins, Chinstraps using their flippers to swim at speeds of up to 20 miles per hour. On land, Chinstraps often ‘toboggan’ on their stomachs, propelling themselves by their feet and flippers. They climb out of the water and up steep slopes using all four limbs and they are able to jump large distances to reach footholds.

On land they build circular nests from stones, and lay around two eggs, which are incubated by both the male and the female for shifts of five to ten days. They can also breed on icebergs, though they prefer non-icy conditions.

The chicks hatch after about 35 days, and have fluffy gray backs and white fronts. The chicks stay in the nest for 20–30 days before they go to join a creche.

At around 50–60 days old, they moult, gaining their adult plumage and go to sea.

The Chinstrap are some of the boldest and most aggressive penguins.

In 2004, two male chinstrap penguins named Roy and Silo in Central Park Zoo, New York City formed a pair-bond, and took turns trying to “hatch” a rock; this was substituted by a keeper for a fertile egg, and the pair subsequently hatched and raised the chick. See And Tango Makes Three.