This species’ common name was derived from its noisy song, which ends in chuKAR chuKAR.

The Chukars are native of the Middle East and southern Asia, but have been widely introduced throughout much of the western United States and southern Canada.

Chukars have distinctive black and white bars on the flanks and a black band running from the forehead across the eyes and running down the head forming a necklace that enclose the white throat and cheeks.

The Chukars occurs naturally in Asia – from Pakistan and Afghanistan in the east to southeastern Europe in the west. 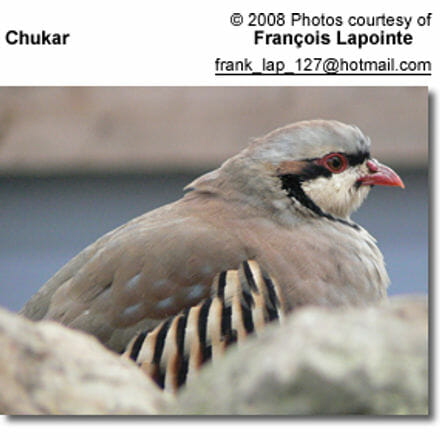 They have been introduced (mainly as game birds) to many parts of the word; and feral populations have established themselves outside their native range in the following countries:

Small populations have been reported in southern Alberta and as far north as Northern British Columbia, Smithers (Canada); as well as western South Dakota, Arizona and New Mexico in the USA.

Those birds that were initially introduced into North America were from the nominate race (Alectoris chukar chukar) that were taken from Afghanistan and Nepal. However, over time, other subspecies have likely intermixed.

Chukars are mostly sedentary (permanent residents); however, seasonal altitudinal movements may occur, as they move from higher elevations to lower terrain during heavy snows; or they may move onto south-facing slopes to escape inclement weather.

The back is light brown back. The chest is grey and the abdomen is buff-colored, with rufous-streaked flanks. Geographical plumage differences have been noted with those occurring in more arid areas tending to be greyer and paler.

The face and throat are white framed by a distinctive black line.

The legs are red. They are not the best fliers and prefer running to flying; however, they can fly short distances, if necessary.

Males and females look alike; except the males are slightly larger in size.

Juveniles look like adults, except they are generally smaller and their plumage is mostly brownish grey with faint brown barring.

It resembles the Rock Partridge, Alectoris graeca, but is browner on the back and has a yellowish tinge to the foreneck.

It can be differentiated from the Red-legged Partridge by its sharply defined throat patch (gorget).

The Barbary partridge has a reddish brown collar (rather than black collar) with a grey throat and face, and a chestnut crown.

Chukars are monogamous (with close pair bonds). In North America, they mostly breed from April to June (during the summer). Males actively defend their nesting territories and their females from other males.

Pairs form in February through mid-March. The males perform courtship displays that involve tilting their heads and showing off their barred flanks. The willing female usually participates in a “tidbitting display” pecking at various objects.

This is a resident breeder in dry, open, and often hilly country. It nests in a scantily lined ground scrape, lined with leaves and feathers. The average clutch consists of 8 up to 20 eggs. They usually produce one clutch a season; however, in activity, double-clutching (two consecutive clutches) are reported, and may also occur in wild populations. The eggs are incubated for about 23 – 25 days. The hatchlings are able to leave the nest shortly after hatching. Fledging (first flights) occur as early as two weeks after hatching. They reach adult size in about 12 weeks.

Chukars will feed on a wide variety of seeds, leaves, grasses, berries, shrub fruits, and some insects (such as grasshoppers, caterpillars, crickets, ants, and various insect eggs) as food; however, they have shown a strong affinity for Drooping Brome (Cheatgrass). These opportunistic feeders will also take cultivated grains. They usually satisfy their water needs by eating succulent vegetation (water-retaining plants); but may visit open water in the summer.

They usually forage on the ground, but may move up into the trees and shrubs for berries and insects.

Chicks mostly feed on insects, to fill their requirement for protein needed for growth.

Chukars usually feed in throughout the morning and afternoon.

Their most common calls are described as a series of noisy, whiny chuck, chuck, chuck, gradually ending in chuKAR chuKAR (hence their common name).

Their calls are frequently heard during the day, especially in the mornings and evenings.