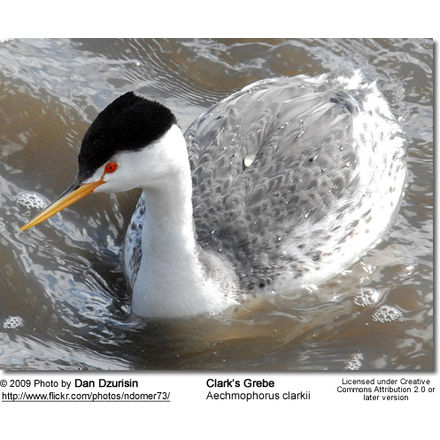 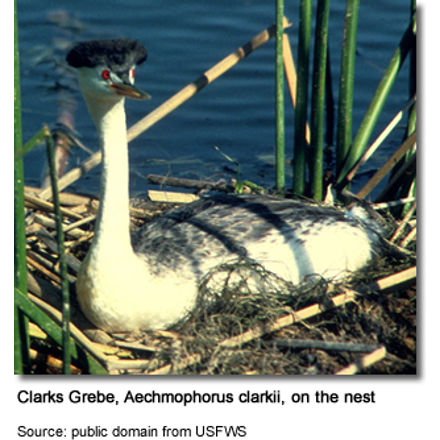 The Clark’s Grebe (Aechmophorus clarkii) – also known as Mexican Grebe – is a North American grebe that is native to Canada, Mexico and United States.

This large grebe is identified by its long, swan-like neck, and contrasting black and white plumage.

The Clark’s Grebe is a white-faced version of the Western Grebe, and until the 1980’s, it was thought to be a pale morph (genetic mutation) of the Western Grebe. However, these two species rarely interbreed – probably due to differences in face and bill coloration, or advertising calls.

It was named after John Henry Clark – a 19th-century American surveyor, naturalist and collector. 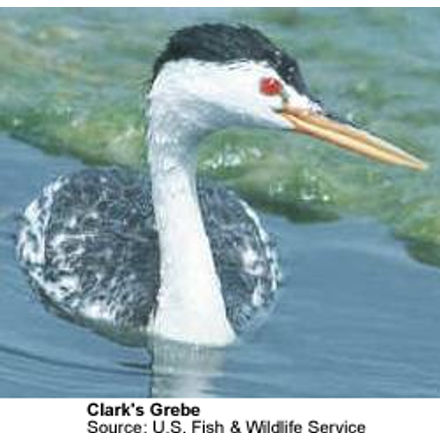 They winter from central California to Colorado, south to Baja California and central Mexico.

There are also resident populations in California, Nevada, the Lower Colorado River in Arizona, and central Mexico.

They inhabit lakes, marshes and bays. During the winter, they also occur along seacoasts. 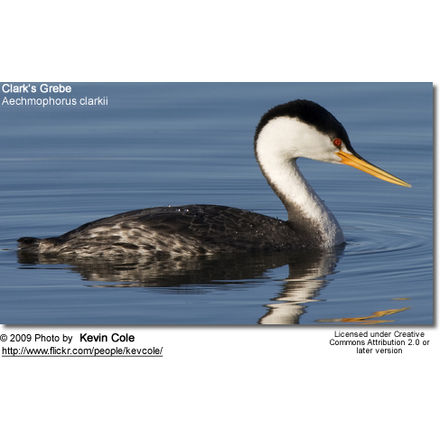 The plumage is black-and-white. The back, wings and cap are blackish-brown to black. The face is white, as are the neck and under plumage. The eyes are red. They have a long, slender, swan-like neck. The feet are set back on the body.

The long, thin bill is slightly upturned and bright yellow, which differentiates this species from the Western Grebe, which has a straight and greenish-yellow bill. The Clark’s Grebe has white around the eyes, while those areas are black in the Western Grebe. 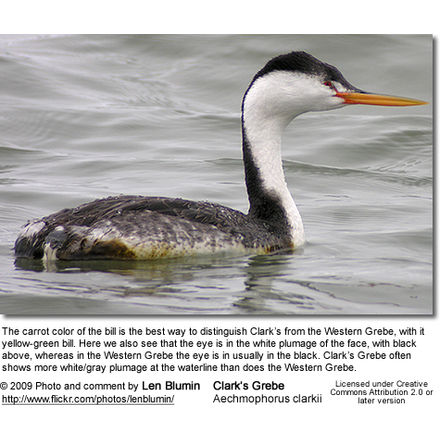 Most breeding activity is observed in June and July.

They perform the same elaborate courtship display as the Western Grebe.

The average clutch consists of 2 – 7 (mostly 3 – 4) bluish-white eggs that are about 2.3 inches (58 mm). The eggs are incubated by both parents for about 23 days. The hatchlings are covered in white down. The young fledge when they are about 63 – 77 days old.

Clark’s Grebes mostly feed by diving underwater, propelled by their feet, as they pursue fish, such as carp and herring, which make up the largest part of their diet. They will also eat mollusks, crabs, salamanders and insects. 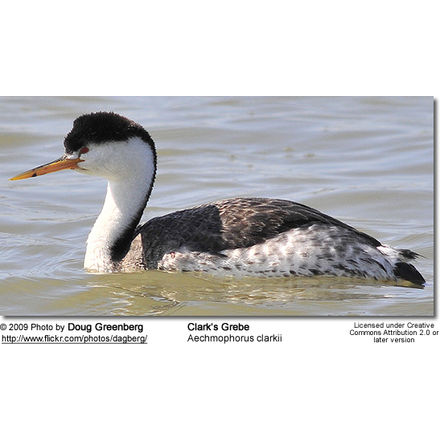