Cockatiels (Nymphicus hollandicus) are often simply referred to as “tiels” in the United States or Quarrions and Weiros in their native country of Australia.

Cockatiels are currently considered the smallest member of the Cacatuidae (cockatoo) family. This classification is based on physical and behavioral similarities, such as the cockatiel’s head crest and male-female coloration; and as well as nesting habits of cockatiels and members of the cockatoo genus.

These small parrots occur naturally in the outback regions of central Australia, where they are inhabit the Australian wetlands, scrublands, and bush lands.

However, there is a great demand in the pet market for these sociable and generally gentle parrots, and they have been introduced to many parts of the world. Some feel that they are more popular than his smaller cousin – the Budgerigar.

Since cockatiels are easy to keep and readily breed, sufficient numbers of them are available for the pet market. Today, all pet tiels are bred in captivity, as Australia no longer permits the export of native wildlife, whether endangered or not.

Like some other cockatoos, as for example the Sulphur-crested Cockatoo, the cockatiel has an erectible crest. Tiels and cockatoos in general also share other features, such as the facial feathers covering the sides of the beak, which are rarely – if ever – found outside the Cacatuidae family.

In contrast to most cockatoos, the cockatiel has long tail feathers, roughly making up half of its total length. Its distinctive pointed yellow crest is held erect when startled or excited, while a crest slightly tilted indicates a relaxed state of mind.

The plumage is generally mid-grey, lighter underneath, with an orange cheek patch and a prominent white blaze on the wings. A row of yellowish spots can be found underneath the wings of female cockatiels, but not on the males.

Some other mutations exist, such as the Lutino, which is a light yellow color. Female Lutinos also have barred tail feathers. Both the cock and the hen have yellow facial feathers: the female has a yellow wash around the beak and eye, in the male, yellow covers most of the head and the fore part of the crest.

Male cockatiels are very protective and nurturing of their offspring and are known to be very capable of raising their newborns if the mother is unable to.

Their lifespans in captivity are generally reported as 15-20 years, though it is sometimes given as short as 12-15 years and there are anecdotes of some living as long as 30 years.

Their voices are quite pleasing, and they rarely get noisy, except when excited and that usually doesn’t take long.

Pet cockatiels have been bred to have many different coloration patterns. Featured above (Soupy) and below (Cico) are normal greys. The “wild” natural grey tiels are said to be the hardiest and smartest of all.

This might have been true for the longest time, as a lot inbreeding was done to produce mutations. Many color mutations are now well established and may very well be as hardy and smart as the original greys.

The opinions differ as much as the personalities of the great numbers of cockatiels out there. Over the years, I have owned very smart mutation tiels as well normal greys. I would choose a pet on the basis of its personality over its coloration any time. 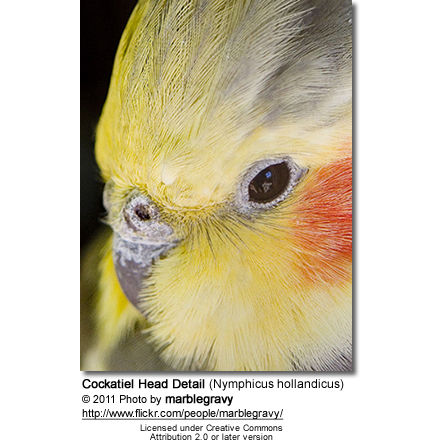 Available color variants include Lutino, Pearl, Cinnamon, Pied, Silver, and Whiteface (mutation photos can be viewed on this webpage) and appear both singly and in combinations such as lutino pearl, whiteface pied, and the very rare whiteface lutino which is the technical term for albino cockatiels.

There have also been reports of an ‘Olive’ variant. Albinos (who have no color pigments) are relatively rare and more expensive than other colorations — although they have become more available in recent years and the price went down substantially since then.

Whereas all other tiels have black eyes, the whiteface lutino has pink / red eyes, pink toenails, and a pink beak. Whereas most mutations persist into adulthood, certain mutations like pearl are molted out in the males and retained in the adult females.

Nearly all whiteface lutinos are females, a factor of the sex-linked mutations that create the combination.