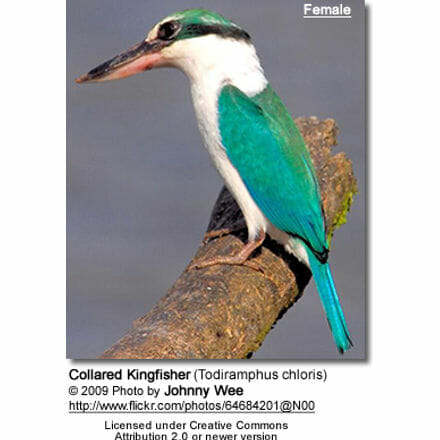 The Collard Kingfishers have a wide range extending from the Red Sea across southern Asia and Australasia to Polynesia.

They inhabit the coastlines of Northern and Northeastern Australia.

It is most commonly found in coastal areas, particularly in mangrove swamps. It also inhabits farmland, open woodland, grassland and gardens. In some parts of its range, especially on islands, it can be seen further inland, ranging into forest or into mountain areas. 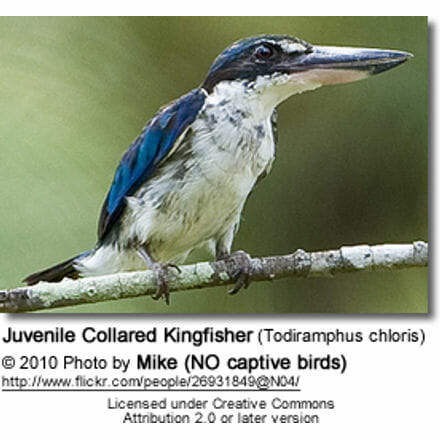 This petite, brightly colored bird possesses dark blue or green wings, tail and head. The head is striped, and the bill is very solid. The female’s coloring is not quite as bright as the male’s.

The Collared Kingfisher is a medium-sized kingfisher, measuring 22 to 29 cm in length (including the tail) and weighing about 51 to 90 grams.

The plumage varies from blue to green above while the underparts can be white or buff. There is a white collar around the neck, giving the birds its name. The large bill is black with a pale yellow base to the lower mandible (bill).

Their bodies are unusually configured. All Kingfishers are known for their stocky bodies, large heads and long, thick, sharply pointed bills, shaped like a dagger. In those species which dive for fish, the bill is generally longer and more compressed; in those which hunt for prey on land, it is shorter and broader.

The bill seems disproportionate to the rest of the body, but it is designed for impaling and capturing its prey. Their legs are short and their tails broad and stout. Their strong feet support them while perching on branches.

Females tend to be greener than the males.

Immature birds are duller than the adults with dark scaly markings on the neck and breast.

It has a variety of calls which vary geographically. The most typical call is loud, harsh and metallic and is repeated several times.

They perch almost motionless for long periods waiting for prey.

The Kingfishers will often stab their prey, either with the bill closed or open, depending on the size of the prey; or they will their prey by beating them on the ground or perch to shatter the bones. 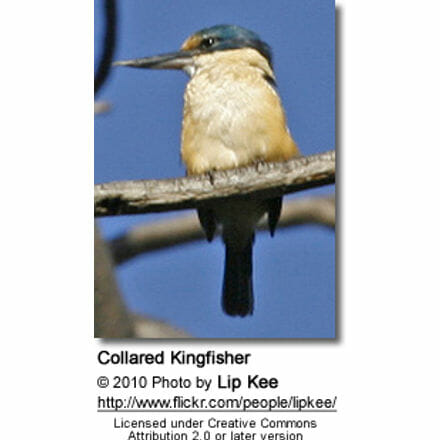 Collared Kingfishers typically nest in holes, which could be natural tree cavities or burrows excavated by the pairs themselves in a rotten tree, termite mounds or earth banks. They will also occupy old woodpecker holes.

They usually lay two to seven rounded whitish eggs, which are placed directly on the floor of the burrow with no nest material used. Both parents take part in incubating the eggs and feeding the chicks. The young birds leave the nest about 44 days after hatching.

The young grow quickly. After hatching, they are altricial (helpless, without feathers or down) and depend on their parents for care and feeding. But soon the young are able to travel toward the entrance of the tunnel where they wait for the adults to feed them. Eventually, they are fed on a perch near the entrance. Fledging can last a few days to a few weeks. After that, the young will be on their own and will feed themselves.

Two broods are often raised in a year.