Out of the seven subspecies of Sharp-tailed Grouse, the Columbian is the smallest at 15–20 inches (38–51 cm) in length. 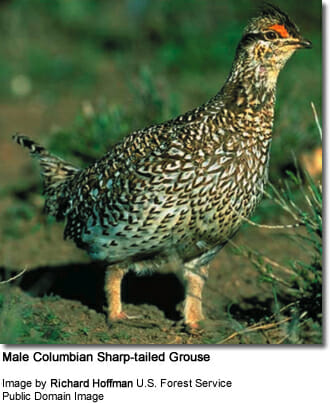 The plumage is mostly grayish-brown with white and black markings. It has a white wedge-shaped tail.

Males have a longer tail, a purple throat patch and a yellow comb over the eye.

Its historical range extended from British Columbia south through eastern Washington and Oregon to Northeastern California, Nevada, and Utah, and then west to the Continental Divide.

It inhabits sagebrush-bunchgrass prairies, meadow-steppe, mountain shrub, and riparian zones. It was first described by the Lewis and Clark expedition, and was named by George Ord.