The Common Cuckoo (Cuculus canorus) is a member of the cuckoo order of birds, the Cuculiformes, which also includes the roadrunners, the anis, the coucals, and the Hoatzin.

The cuckoo group gets its English and scientific names from the call of the male Common Cuckoo, usually given from an open perch, goo-ko. The female has a loud bubbling call.

The cuckoo is a widespead summer migrant to Europe and western Asia, and winters in Africa. It is a brood parasite, which lays its eggs in the nests of other bird species, particularly of Dunnocks, Meadow Pipits, and Reed Warblers.

This cuckoo is a greyish bird with a slender body, long tail and strong legs. The females only are sometimes brown, the “hepatic” phase. It looks like a small bird of prey in flight, although the wings stay below the horizontal.

Its food is insects, with hairy caterpillars, which are distasteful to many birds, being a specialty. It is a bird of open land. 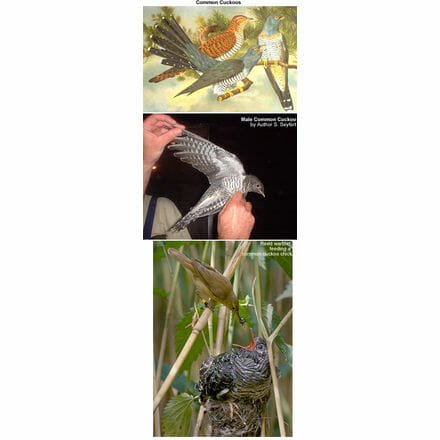 An ideal breeding habitat for Cuckoos is where there are reed beds and trees. An individual female Cuckoo’s territory will contain up to about 20 Reed Warbler’s nests.

Female Cuckoos spend a long time watching over the reed beds in their territory from the trees, and watch the behavior of the Reed Warblers as they build their nests and start their broods. The female Cuckoo has to time her egg laying to just when the reed warblers start to lay eggs.

It is not known how the hen cuckoo gets the timing right, as she cannot see the Reed Warblers’ eggs from the trees, but it is likely that is it from the behavior of warblers.

At the appropriate moment the hen Cuckoo flies down to the reed warblers’ nest, pushes one Reed Warbler egg out of the nest, lays an egg and flies off. The whole process is achieved in only about 10 seconds.

At 14 days old, the Cuckoo chicks are about 3 times the size of the adult Reed Warblers. The numerous and rapid hunger calls of the single cuckoo chick, and to a lesser extent its colored gape, encourage the host parents to bring more food.

Cuckoo chicks fledge after about 20 -21 days after hatching, which is about twice as long as for Reed Warblers. If the hen cuckoo is out-of-phase with a clutch of Reed Warbler eggs, she will eat them all so that the hosts are forced to start another brood.

The Cuckoo chick methodically evicts all other young from the nest. It is a much larger bird than its hosts, and needs to monopolize the food supplied by the parents. The Cuckoo chick will roll the other eggs out of the nest by pushing them with its back over the edge.

The combination of behavior and anatomical adaptation of the common cuckoo was first described by Edward Jenner, who was elected as Fellow of the Royal Society in 1788 for this work. This was well before he invented vaccination.

Female Cuckoos are divided into gentes, that is populations favoring a particular host species’ nest and laying eggs which match those of that species in color and pattern. The color pattern is inherited from the female only, suggesting that it is carried on the sex-determining W chromosome (females are WZ, males ZZ).

It is notable that most non-parasitic cuckoos lay white eggs, like most non-passerines other than ground nesters. The exception is in the case of the Dunnock, where the Cuckoo’s egg has no resemblance to its hosts’ blue eggs. This is thought to be because the Dunnock is a recent host, and has not yet acquired the ability to distinguish eggs.

Male Cuckoos breed with females without regard to gens. This results in gene flow between the gentes and maintains a common gene pool for the species (except for the genes on the W chromosome).