Its plumage is greenish above and whitish below. It was named for its distinctive head crest, which is orange in the male and yellow in the female. The crest is displayed during breeding.

It has two white wingbars, a black eye stripe and a white supercilium. 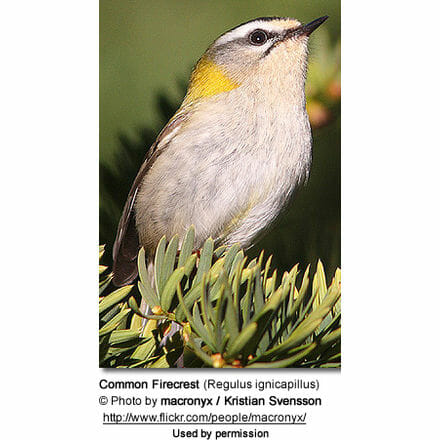 The temperate areas of Europe and northwestern Africa are the prime breeding grounds for the Common Kinglet. Most of the birds which inhabit central Europe migrate, spending their winters south and west of their breeding localities.

The Common Firecrest Kinglet is almost entirely insectivorous, feeding primarily on the smaller arthropods such as springtails, aphids and spiders. Since they prefer larger insects than the other species, they do not have to compete for the same prey. They feed on the cocoons and eggs of spiders and insects as well as pollen from time to time.

This species of Firecrest hunts in the upper branches of coniferous and deciduous trees. A quick, agile bird, the Common Kinglet is able to cover great distances in less time than other species of Kinglets. They kill and prepare the larger invertebrates they find by beating them repeatedly against a branch.

In winter, the Common Firecrest will join other species of diminutive birds which are foraging for food. These loosely organized flocks hunt across a broader range of habitats and vegetation than solitary or paired birds. Thus, they are able to access better food supplies than solitary birds. In some areas, wintering birds will find food in urban areas, seeking out neighborhood birdfeeders. 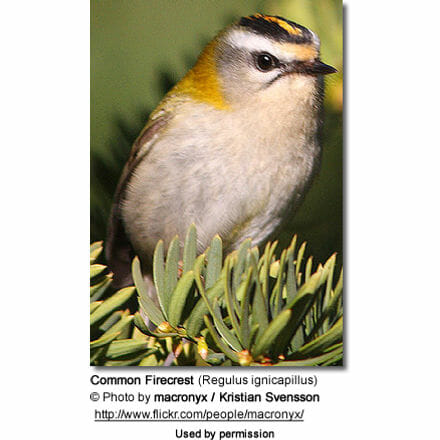 Each pair requires about one and a half acres of territory to breed successfully.
The Common Firecrest is monogamous. During breeding season, the male will court the female by singing to her as he raises the feathers on his crown patch. He will point his crest toward her and hover over her right before copulation takes place. She chooses the broadleaved or coniferous woodlands and gardens in which to build her nest, then constructs it on the branch of a tree.

The nest is usually suspended from a hanging branch. Although most sources report that the nests are hung from lower tree branches, some nests have been reported to have been suspended from branches 2.5 to 20 m (8 to 65 ft) above the ground.

As with other species of Firecrests, the Common Firecrest builds its cup-shaped nest in three layers, and its entrance opening is near the top of the nest. The nest’s outer layer is composed of moss, small twigs, cobwebs and lichen, and the birds use spider webs to attach the nest to the thin, supporting branches.

Only the female constructs the nest; the male will travel with her, though, as she finds the nesting materials and builds the nest. It can take from a few days to three weeks to complete the nest-building process.

The birds will lay their eggs during April and May, depending on the temperatures; many pairs will raise a second clutch beginning in June and July. The tiny pink eggs have slightly red markings on the larger end.

The clutch size in Europe is 7–12 eggs, but fewer are laid in the northwest African regions. The female incubates the eggs for about 15 days, and the chicks fledge 10 days after she is finished brooding them. Both parents care for the chicks, feeding them for a while after fledging. During the first few days of life, the chicks are fed springtails (wingless jumping insects); then they are fed larger prey as they mature. The chicks are ready to reproduce when they reach one year of age and will live to be only about two years old.

The song is a repetition of high, thin notes, slightly lower in pitched than the related Goldcrest’s song. The 11-14 notes increase in volume and tempo to the end of the sequence, and only take 2-4 seconds to vocalize. Its contact call is a “zit-zit-zit” repeated several times. This pattern is repeated for up to a minute.

During breeding season in April and May, the Common Kinglet’s song can be heard most often at dawn and occasionally during the day. The rest of the year their song is limited to the morning.