The Common Hill Myna (Gracula religiosa), sometimes spelled “mynah” and formerly simply known as “Hill Myna”, is the myna bird most commonly seen in aviculture, where it is often simply referred to by the latter two names.

It is a member of the starling family (Sturnidae), resident in hill regions of South Asia and Southeast Asia. The Sri Lanka Hill Myna, a former subspecies of G. religiosa, is generally accepted as a separate species G. ptilogenys nowadays.

The Enggano Hill Myna (G. enganensis) and Nias Hill Myna (G. robusta) are also widely accepted as specifically distinct, and many authors favor treating the Southern Hill Myna (G. r. indica) from the Nilgiris and elsewhere in the Western Ghats of India as a separate species also.

This is a stocky jet-black myna, with bright orange-yellow patches of naked skin and fleshy wattles on the side of its head and nape. At about 29 cm or 11.4 inches in length, it is somewhat larger than the Common Myna (Acridotheres tristis)

It is overall green-glossed black plumage, purple-tinged on the head and neck. There are large white wing patches which are obvious in flight but mostly covered when the bird is sitting.

The bill and strong legs are bright yellow, and there are yellow wattles (loose folds of skin) on the nape and under the eye. These differ conspicuously in shape from the naked eye-patch of the Common Myna and Bank Myna (A. ginginianus), and more subtly vary between the different hill mynas from South Asia: in the Common Hill Myna they extend from the eye to the nape, where they join, while the Sri Lanka Hill Myna has a single wattle across the nape and extending a bit towards the eyes.

In the Southern Hill Myna, the wattles are separate and curve towards the top of the head. The Indonesian populations which are treated as distinct by many authors differ in size, particularly that of the bill.

Males and females look alike. Juveniles have a duller bill. Apart from the putatively distinct populations discussed above, the G. religiosa has five or six subspecies which differ only slightly. They are: 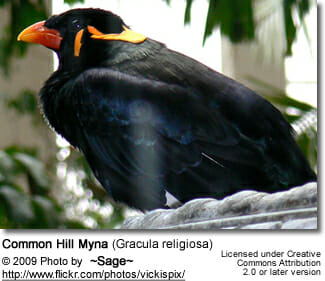 The Hill Myna is often detected by its loud shrill descending whistles followed by other calls. It is most vocal at dawn and dusk when it is found in small groups in forest clearings high in the canopy.

Each individual has a repertoire between 3 and 13 such call types, which may be shared with some near neighbors of the same sex, being learned when young. There is a very rapid change of dialect with distance, such that birds living more than 15 km apart have no call-types in common with one another.

Even though all Hill Mynas are capable of human speech, some are better than others. Some are able to talk with the same tones and clarity of speech as the human voice they mimic. The Hill Mynah has been described as the best talking bird in the world, indeed the champion of mimics!

The Common Hill Myna (Gracula religiosa religiosa) is the larger of the two and has a louder voice.

Lesser Hill Mynas or Southern Hill Mynas (Gracula religiosa indica) are also capable of learning words and phrases, but their voice has a higher pitch and they don’t have the tone ranges needed to imitate human voice as well as the Greater Indian Hill and Common Hill Mynas.

Unlike some other birds, such as the Greater Racket-tailed Drongo (Dicrurus paradiseus), the hill mynas do not imitate other birds in the wild, although it is a widely held misconception that they do.

On the other hand, in captivity, they are among the most renowned mimics, perhaps on par only with the African Grey Parrot (Psittacus erithacus). They can learn to reproduce many everyday sounds, particularly the human voice, and even whistled tunes, with astonishing accuracy and clarity.

This myna is a resident breeder from Kumaon division in India (80° eastern longitude) east through Nepal, Sikkim, Bhutan and Arunachal Pradesh, the lower Himalayas, terai and foothills up to 2000 m ASL. Its range continues east through Southeast Asia northeastwards to southern China, and via Thailand southeastwards across northern Indonesia to Palawan in the Philippines.

It is probably not found anymore in Bangladesh due to habitat destruction and overexploitation for the pet trade. A feral population on Christmas Island has likewise disappeared. Introduced populations exist in Puerto Rico and perhaps in the mainland USA and possibly elsewhere; feral birds require at least a warm subtropical climate to persist.

This myna is almost entirely arboreal, moving in large noisy groups of half a dozen or so, in tree-tops at the edge of the forest. It hops sideways along the branch, unlike the characteristic jaunty walk of other mynas. Like most starlings, the Hill Myna is fairly omnivorous, eating fruit, nectar and insects.

They build a nest in hole. The usual clutch is 2-3 eggs.

The hill mynas are popular cage birds, renowned for their ability to imitate speech. The widely-distributed Common Hill Myna is the one most frequently seen in aviculture. Demand outstrips captive breeding capacity, so they are rarely found in pet stores and usually purchased directly from breeders or importers who can certify that the birds are traded legally.

This species is widely distributed and locally common, and if adult stocks are safeguarded it is able to multiply quickly. On a world-wide scale, the IUCN thus considers the Common Hill Myna a Species of Least Concern. But in the 1990s, nearly 20,000 wild-caught birds, mostly adults and immature grown-ups, were brought into trade each year. In the central part of its range, G. r. intermedia populations have declined markedly, especially in Thailand which supplied much of the thriving Western market.

Its neighbor countries, from where exports were often limited due to political or military reasons, nevertheless supplied a burgeoning domestic demand, and demand in the entire region continues to be very high. In 1992, Thailand had the Common Hill Myna put on CITES Appendix III, to safeguard its stocks against collapsing. In 1997, at request of the Netherlands and the Philippines, the species was uplisted to CITES Appendix II.

The Andaman and Nicobar Islands subspecies andamanensis and (if valid) halibrecta, described as “exceedingly common” in 1874, qualified as Near Threatened in 1991. The former is not at all common anymore in the Nicobar Islands and the latter – if distinct – has a very limited range.

Elsewhere, such as on the Philippines and in Laos, the decline has been more localized. It is also becoming increasingly rare in regions of Northeastern India due to capture of fledged birds for the illegal pet trade. In the Garo Hills region, however, the locals make artificial nests of a split-bamboo framework covered with grass, and put them up in accessible positions in tall trees in a forest clearing or at the edge of a small village to entice the mynas to breed there.

The villagers are thus able to extract the young at the proper time for easy hand-rearing, making Common Hill Myna farming a profitable small-scale cottage industry. It helps to preserve the environment, because the breeding birds are not removed from the population, while habitat destruction is curtailed because the mynas will desert areas of extensive logging and prefer more natural forest to plantations.

As the mynas can be something of a pest of fruit trees when too numerous, an additional benefit to the locals is the inexpensive means of controlling the myna population: failing stocks can be bolstered by putting out more nests than can be harvested, while the maximum proportion of nestlings are taken when the population becomes too large.

They feed on ripened fruit, especially figs. They also eat berries and seeds from a wide variety of trees and shrubs, and nectar from several kinds of flowers. Occasionally they eat insects from the foliage of trees and termites. They may also eat a small lizard or other small mammal to feed to their babies during breeding season. Mynah breeders offer meal worms for this purpose.