The Common Myna or Indian Myna (Acridotheres tristis) also sometimes spelled Mynah, is a member of the starling family. It is a species of bird native to Asia with its initial home range spanning from Iran, India and Kazakhstan to Malaysia and China. An omnivorous open woodland bird with a strong territorial instinct, the Myna has adapted extremely well to urban environments. 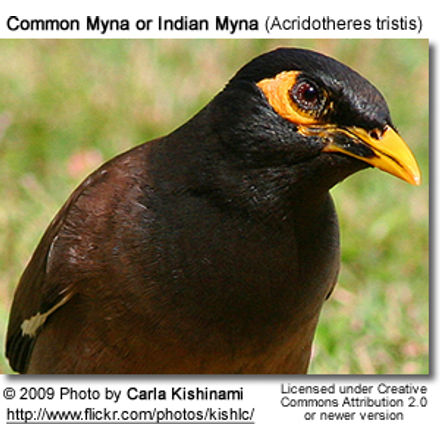 The Myna has been introduced in many other parts of the world and its distribution range is on the increase to an extent that in 2000 the IUCN Species Survival Commission (IUCN) declared it as one of the just three birds among the World’s 100 worst invasive species. It is a serious threat to the ecologies of Australia.

The Common Myna is readily identified by the brown body, black hooded head and the bare yellow patch behind the eye. The bill and legs are bright yellow. There is a white patch on the outer primaries (longest wing feathers) and the wing lining on the underside is white. The race found in Sri Lanka, melanosternus is darker than the widespread nominate race. Males and females look alike and birds are usually seen in pairs. 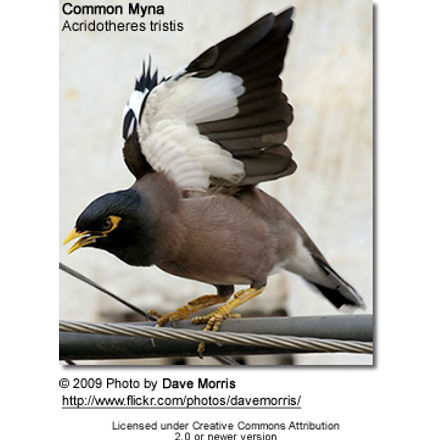 The calls includes croaks, squawks, chirps, clicks and whistles, and the bird often fluffs its feathers and bobs its head in singing. The Common Myna screeches warnings to its mate or other birds in cases of predators in proximity or when its about to take off flying.

Common Mynas are popular as cage birds for their singing and “speaking” abilities. They are believed to mate for life. They breed through much of the year depending on the location, building their nest in a hole in a tree or wall. The normal clutch is 4–6 eggs. The Asian Koel is sometimes brood parasitic on this species.

Like most starlings, the Common Myna is omnivorous. It feeds on insects and fruits and discarded waste from human habitation. It forages on the ground among grass for insects, and especially for grasshoppers, from which it gets the generic name Acridotheres, “grasshopper hunter”. It however feeds on a wide range of insects, mostly picked from the ground. It walks on the ground with occasional hops.

This abundant passerine is typically found in open woodland, cultivation and around habitation. 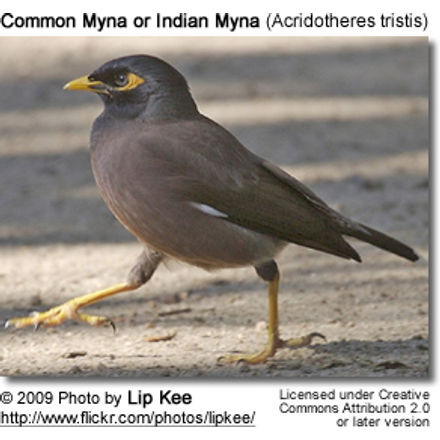 Although this is an adaptable species, its population has been decreasing significantly in Singapore and Malaysia (locally called as ‘gembala kerbau’, literally ‘buffalo shepherd’) due to competition with its cousin, the introduced Javan Myna.

The bird likely owes its success in the urban and suburban settings of Sydney and Canberra to its evolutionary origins; having evolved in the open woodlands of India, the common myna is pre-adapted to habitats with tall vertical structures and little to no vegetative ground cover, features characteristic of city streets and urban nature preserves.

The common myna (along with common starlings, house sparrows, and rock doves) is a nuisance to city buildings; its nests block gutters and drainpipes, causing water damage to building exteriors. 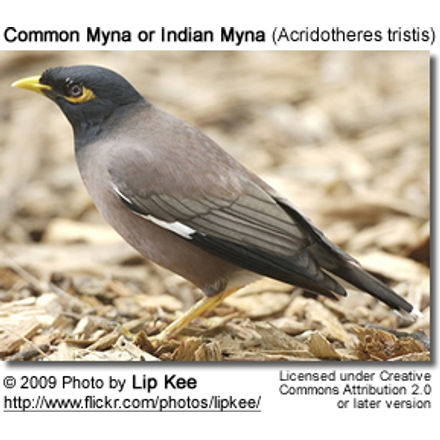 The IUCN declared this myna as one of the only three birds among the World’s 100 worst invasive species. It has been introduced widely elsewhere, including adjacent areas in Southeast Asia, Madagascar, the Middle East, South Africa, Israel, North America, Europe, Australia, New Zealand and various oceanic islands, including a very prominent population in Hawaii.

The Common Myna is a pest in South Africa, North America, the Middle East, Australia, New Zealand and many Pacific islands. It is particularly problematic in Australia. Several methods have been tried to control the bird’s numbers and protect native species.

Countries where Common Mynas are a serious pest 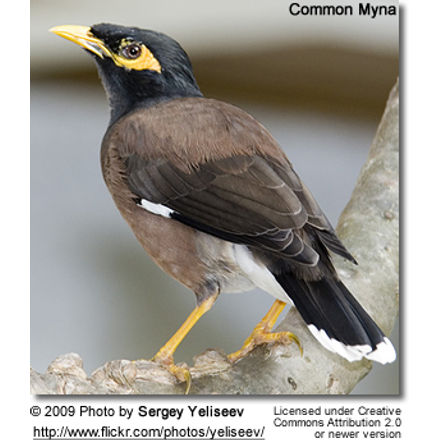 In Australia, the Common Myna is an invasive pest. They are now often the predominant bird in urban areas all along the East coast. In a 2008 popular vote, the bird was named “The Most Important Pest/Problem” in Australia.

The common myna is found naturally throughout Southeast Asia, and was first introduced to Australia in Victoria between 1863 and 1872 into Melbourne’s market gardens to control insects.

The bird is likely to have spread to New South Wales (where it is currently most populous) at around the same time, but documentation is uncertain The bird was later introduced to Queensland as a predator of grasshoppers and cane beetles; the reasons for its original introduction to Victoria is however, lost in history.

Currently, common myna populations in Australia are concentrated along the eastern coast around Sydney and its surrounding suburbs, with sparser populations in Victoria and a few isolated communities in Queensland.

The bird can live and breed in a wide range of temperatures, though it thrives in hotter regions. Self-sustaining populations of common myna have been found in regions of mean warmest month temperature no less than 23.2°C and mean coldest month temperature no less than -0.4°C, implying that the common myna could potentially spread from Sydney northward along the eastern coast to Cairns and westward along the southern coast to Adelaide (though not to Tasmania, Darwin, or across the Great Dividing Range to the arid interior regions). 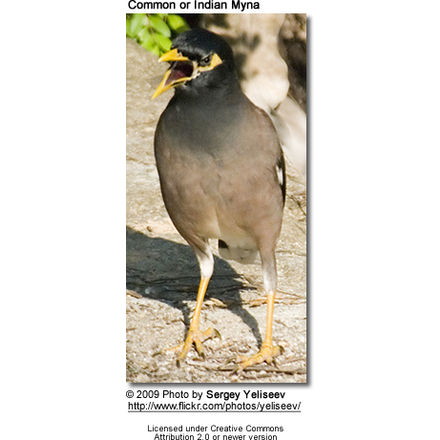 In South Africa where it escaped into the wild in 1902, it has become very common and its distribution is greater where human populations are greater or where there is more human disturbance.

In Israel, Mynas escaped a bird zoo in Tel Aviv in the 1990s and quickly spread all over the center of the country and perhaps further. They actively compete with local birds for nesting locations and food.

The common myna is a hollow-nesting species; that is, it nests and breeds in protected hollows found either naturally in trees or artificially on buildings (for example, recessed windowsills or low eaves). Compared to native hollow-nesting species, the common myna is extremely aggressive, and breeding males will actively defend areas ranging up to 0.83 hectares in size (though males in densely populated urban settings tend to only defend the area immediately surrounding their nests).

The common myna is also known to maintain up to two roosts simultaneously; a temporary summer roost close to a breeding site (where the entire local male community sleeps during the summer, the period of highest aggression), and a permanent all-year roost where the female broods and incubates overnight. Both male and female common mynas will fiercely protect both roosts at all times, leading to further exclusion of native birds.

Threat to crops and pasture

The common myna (which feeds mostly on ground-dwelling insects,tropical fruits such as grapes plums and some berries and, in urban areas, discarded human food) poses a serious threat to Australian blueberry crops, though its main threat is to native bird species.

In Hawaii, where the common myna was introduced to control pest armyworms and cutworms in sugarcane crops, the bird has helped to spread the robust Lantana camara weed across the islands’ open grasslands.

The relatively recent invention of durable ultraviolet-resistant plastic netting has enabled some fruit orchards and fisheries to effectively and safely prevent all bird species from causing damage to them; however, since the common myna’s most important damage is to native bird species and urban buildings, more unorthodox methods of control have been tested. Scaring strategies, population reduction, and repellent chemicals have all been used in attempts to eliminate or drive away populations of common mynas and other urban and suburban pest birds.

Scaring devices on their own are, by and large, ineffective means of control for pest birds. Some commercial scaring devices emit bursts of high-frequency sound normally inaudible to humans, and others emit recordings of the alarm calls of the intended pest species. In both of these cases, local pest bird populations are quickly habituated to the sound of the device (though the time before habituation can be extended in the latter type of device by randomly alternating between different recordings of the alarm call). On the other hand, scaring devices may help reduce crop damage if they are used at a site where a crop is yet to ripen and the local pest birds have not yet established a habit of feeding there.

The other dominant method of scaring is shooting blank cartridges and noisemakers from shotguns, a method obviously unsuited for use in an urban environment.

Shooting to kill is one of the most common methods of pest bird control, but, such a technique is only an option for rural landowners and farmers.

The snail and slug repellent methiocarb was tested in Australia in the 1970s as a bird repellent, but inconclusiveness of field trials and problems similar to those encountered with poisoned bait (i.e., non-target poisoning) prevented wide adoption of its use. The use of methiocarb as a bird repellent has since been discontinued due to the manufacturer failing to provide satisfactory toxicological data to renew registration.